Most modern gamers love beautiful components. Maybe it’s a reaction to our excessive screentime these days, where we travel in magical, wondrous worlds that we can see and hear but cannot touch. For me, that’s a lot of the appeal of board games. Having physical pieces to handle while looking at the faces of friends and family. We’re even funding crazy-gorgeous deluxe versions of games (hoping they arrive SOMEDAY). So, it was just a tiny bit surprised when someone at our table commented that Knit Wit, the new game from Matt Leacock, was ‘really overproduced.’

Sure, microgames have shown us that exceptional game experiences can come in small packages. Heck, there are some really cool print and 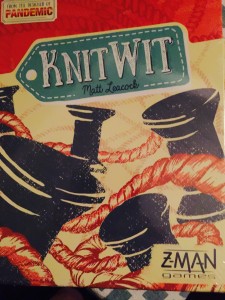 play games. That doesn’t mean fillers cannot come in big ones. Knit Wit is indeed a short yet enjoyable game that comes in a big box that might make some players think it could have been produced for a lower price. Okay, maybe that’s true. We’ve already seen Flick ‘Em Up downgraded to make it more affordable. I say that’s a bummer but people are usually on a budget so is Knit Wit worth your $35 (MSRP)?

Knit Wit is one of those word games that feels immediate both because it is familiar and good. The elevator pitch is “Scattergories with Venn Diagrams.” Yeah, that’s a solid description I wish I’d used initially when explaining it rather than talking about how to place spools. Players essentially set up a bunch of spools, clothespins, and strings in patterns on a table. The clothespins get small cards with words added to them. Then, based on where the spools get placed, everyone gets a Scattergories list going. The word for each spool needs to take into account the strings that surround it. Thus, Spool Number 5 (there are 8) might be inside the string with a clothespin that has the word “Bad” as well as the one that says “Boring.” So, players would write a word or brief phrase that is both “Bad” and “Boring” (i.e., Superman vs. Batman or post-Nirvana 90’s Rock or maybe Krysten Ritter’s performance in Jessica Jones).

Speed matters, too. Those who fill out their answers quicker (or fill out as many as they know) can stop writing and grab a bonus button, of which there are four, with descending values (simply, elegantly denoted by the number of holes on the buttons). Players then share their answers, with any matches (same answer for a spool) being lost. Like Scattergories, it helps to go a little obscure. But don’t push it; players can challenge your questionable answers and put them to a vote. Then, you total up scored answers with bonuses and it’s over. Until you immediately play it a second time. This is even encouraged by the double-sided score pages, which are on black paper with white pencils to write on them. Love it. 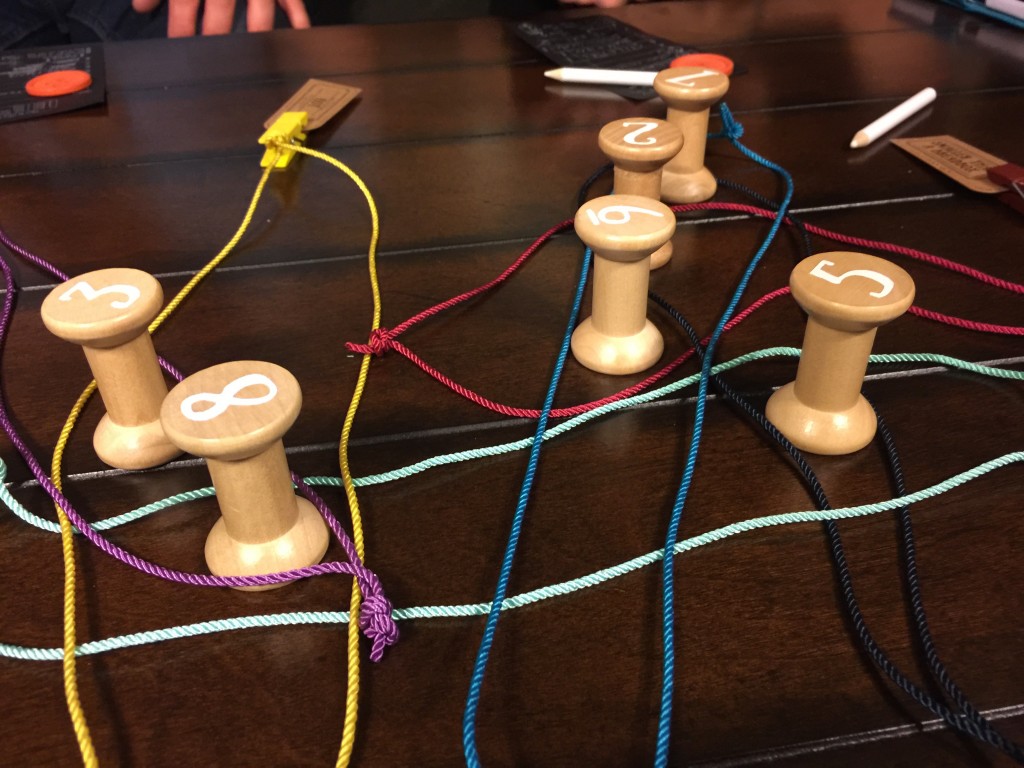 Knit Wit is definitely a good time and was liked by all of our casual gamer friends. More serious word nerds may wish for there to be something more but I say that it’s a pleasant game for all and a likely closer for us in the future.

So what about those components? Well, they’re lovely. The spools are sturdy and pleasing to hold. Buttons, clothespins and other components, especially the unexpectedly rigid (in a good way) word cards are all thematic and fun to hold, even if you wonder whether Z-Man Games hit a JoAnn Fabrics closing sale or something. The box itself is pretty nice, although the slip cover is the only serious misfire. The box closes fine but the slip cover (which, seriously, gamers can’t throw away) is just a pain to put back on. Didn’t they learn to stop with the box innovations after the Lords of Waterdeep fiasco?

In the end, I’m glad to own Knit Wit but I also think that it’s $35 price tag might prevent some sales. If the Z-less Man (had to be said) had found a way to produce the game for $20 in the way that Codenames did, they’d have a mass-market possibility. As it is, it’s a welcome addition to my collection and gamers who love pretty word games that play quickly will enjoy it. Fans of Matt’s other games should know from the packaging that they’re not getting another world-on-fire cooperative game and may indeed be happily surprised to see him turn out a cool little word game like this one.