Thanos Rising is a winning cooperative game for 2-4 players that has garnered BGB’s highest rating. Read on to learn more:

Gamers, both video gamers as well as board gamers, have been disappointed for so many years so many times when a great movie or TV show gets turned into a terrible play experience.

As somebody who worked in the video game industry for many years and made games for many Disney properties, I know that there are additional challenges that are faced when you have to work with a licensed product. Sometimes you don’t know the exact story and you still have to make a game anyway. At other times there are restrictions put into place by the IP holders. Yet sometimes it’s just a lazy publisher or designer figuring they don’t need to work that hard because the property is so popular. This happens A LOT, particularly with one publisher in particular.

I don’t think I’m in the minority when I say that Avengers: Infinity War was a great cinematic experience. I’m baffled by the naysayers (presumably DC fanboys and people who just hate fun). I call myself a fan but not raging fan of the Marvel Cinematic Universe. Some of the films are fantastic, others definitely fall short of that description. I was never a serious comic book reader but I’m impressed with the way Marvel has put out fairly consistent films in the last 10 years and Infinity War is probably the best of the lot. So I came to this game wanting to enjoy it and, frankly, a little fearful that it would fall short. I’m glad to say that didn’t happen.

Taking on the Mad Titan

Thanos Rising is a cooperative game that plays in about 45 minutes with 2 to 4 players playing on a three space board around an awesome Thanos statue. Players take on the role of a leading Marvel character who’s responsible for gathering at team of heroes and defeating villains (your pick of Captain America, Black Panther, Gamora or Dr. Strange). Thanos himself is far too powerful to actually defeat so you aren’t going to be asked to actually take down the mad titan in the game. Instead, you win the game by defeating seven or more of his villains while working to save and recruit other heroes to your team. 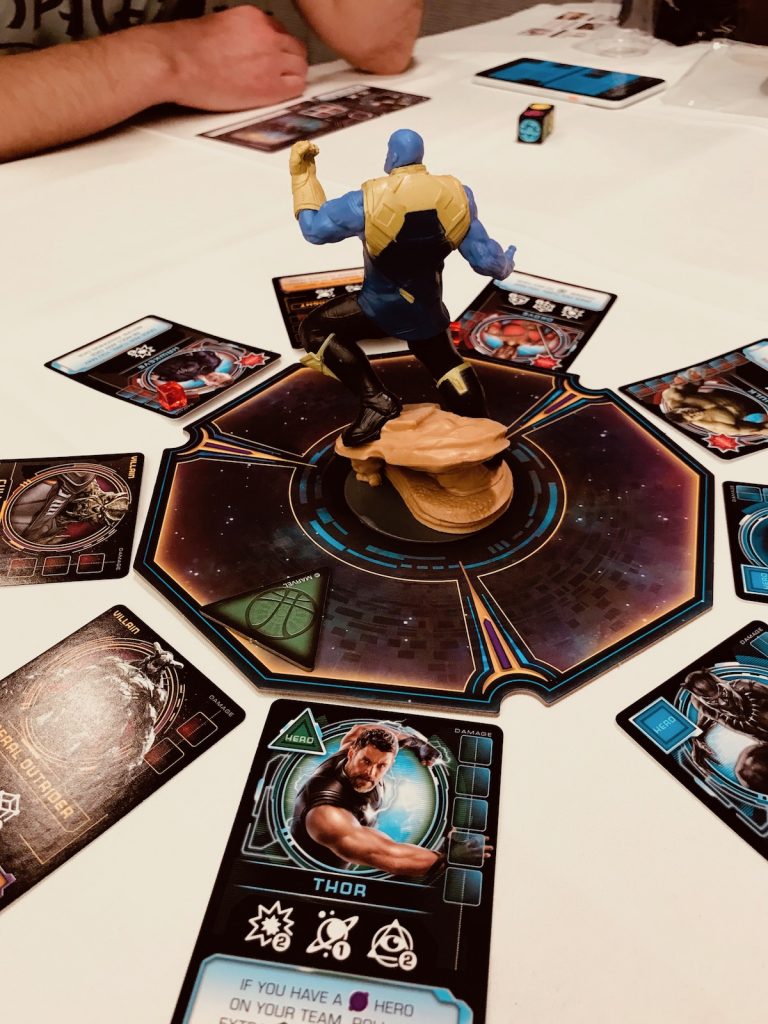 That’s the only way to win the game, but there are three different ways you can lose. First, Thanos can defeat 10 heroes in the game with his strikes that happen before each player around. Two, he can defeat any one of the players entirely by wiping out their team. Lastly, he can collect all six of the Infinity Stones. I am fond of the deep theming here and how it adds tension to the game.

Roll For The Multiverse

The narrative of the game is created through a series of die rolls each turn, in the style of many cooperative games where the players and the game each get a turn. In Thanos Rising, the big purple baddie goes first, with two die rolls determining his progress on collection of an Infinity Stone and some other element. For the stones, he needs to roll that same one five times and then he gets the stone, making future rolls for that stone cause grief for the heroes. The latter die has him an attack heroes, activate villains or make another step towards acquiring a stone.

Player turns are quick but provide simple options about how to contain Thanos. You deploy to one of the places on the board and then get your own dice to roll and act. You begin with a few dice depending on your character and you can improve your dice pool by acquiring other heroes. In this way, the game borrows a bit from Quarriors, a game I thought was a good idea that never really worked as well as I would have liked. To acquire a hero, you need to roll the right icons on your dice.

We Have A Hulk

Bigger heroes like the Hulk or Iron Man are tougher than pushovers like Hawkeye, so it behooves you to acquire the easier ones first. With three cards in each vector, there is bound to be someone who can help, especially since many of the characters are complementary. This is maybe the heart of the design working; USAopoly’s design team didn’t cop out and just say, “They’ll want to acquire Black Widow because Scarlett Johansson is on the card.” Instead, they made the abilities make sense for the character. This is not too much to ask, but it is often overlooked by lazy people who spend a lot of money on licensed games.

Back to it – so, if you recruit heroes, they add to your team in the future, offering you their special ability. These can range from extra dice to special powers to affect the collection of the Infinity Stones. It is definitely worth adding to your team and discussing with the other players which hero should join which team.

There is another reason to recruit heroes. When Thanos hits a vector, he hits all the heroes there waiting to be recruited. If they die, they are out of the game and that helps Thanos win. If you recruit damaged villains, you get them back at full power. Thus, it makes sense to let them take a little fire and then pull them out before they are defeated…if you can do it. I really like this factor that makes you take chances with the heroes’ lives.

Say Goodbye To The Villains 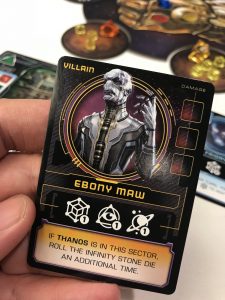 out the guy himself). Similar to the way you recruit, you use your dice to roll enough to defeat the villains. Some are generic villains you can knock off with one or two rolls. Others need enough firepower that you had better recruit some help before you go. There is a very real gameplay reason to defeat them, too. When they activate, their abilities range from annoying to devastating. So, that element may play into which ones you target. You also get bonus tokens when beating villains, which helps motivate their defeat (against endlessly adding to your team).

As I said, this is also how you win the game and you can set the difficulty of the game for between 7 and 10 villains to defeat to win. Experienced gamers will want to set it high for a real challenge. I like the easy variability of that setting, which calls back to Pandemic, one of the classics in the genre of cooperative games.

We have played Thanos Rising a half dozen times and it has been tense and fun each play. The richness of the character collection weighing against the villains containment and the stone gathering is just right for a game that plays in 45 minutes. Like the best thematic games from films (looking at you, Star Wars: Rebellion), Thanos Rising unfolds like your own version of a story you enjoyed. We expect to play it for many years to come.

Look, if you are a Warner Brothers apologist that tries to convince your friends that the DC movies aren’t THAT bad just because Gal Godot is magnificent as Wonder Woman (she really is), you may not like Thanos Rising for reasons that have nothing to do with this very fine game.

But if you’re one of the zillions who loved Marvel’s Avengers: Infinity War, this is a worthy addition to your game collection. Thanos Rising is snappy cooperative game that will engage with both theme and nice design touches that keep the game clean. This is on a shelf with go-to games this year. I expect it to make my dime list for sure.

The components are solid, with quality cards and all but it is that massive, cool Thanos figure that makes this production. We love it so much, it’s on a coveted shelf in our game library. 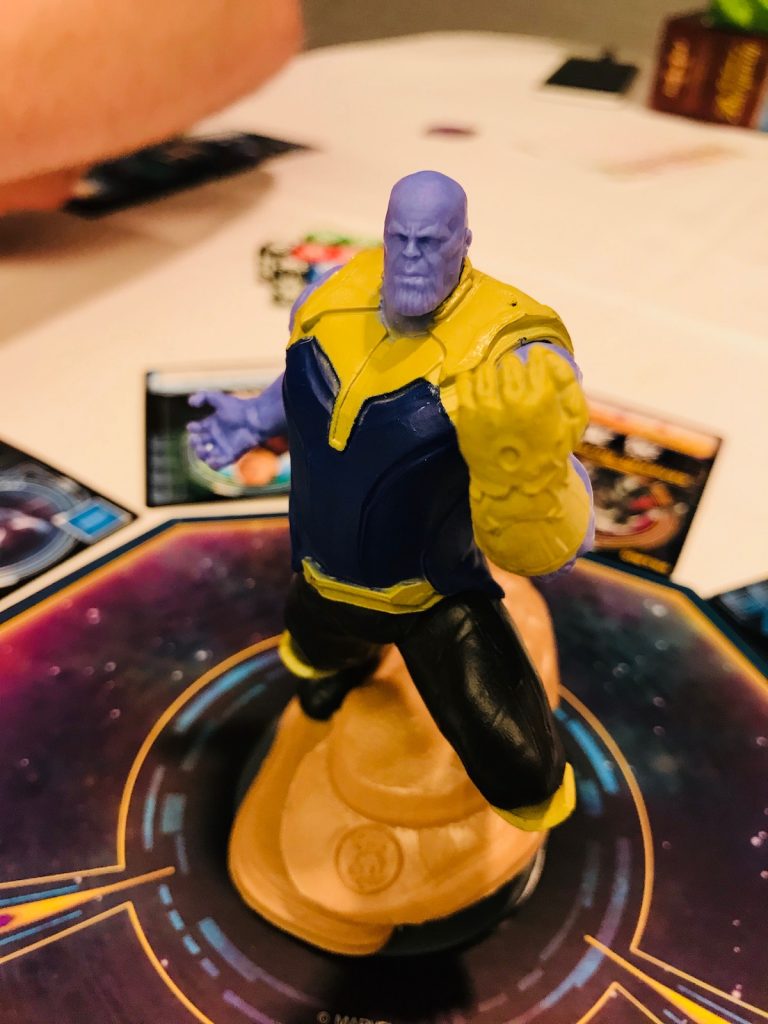 Thanos Rising has been a huge hit with our gaming group, from casual gamers to serious folks that saw it as a pleasant super-filler. The game has staying power, I’m sure. Here’s hoping that USA-opoly gives us an expansion when Avengers: End Game comes out.