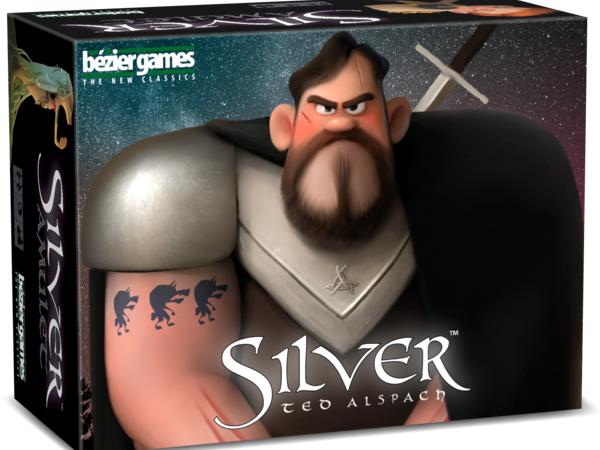 Silver Amulet (also known as Silver, since it introduces a new line) is a card-shedding game for 2-4 players newly-released at GenCon 2019 from Ted Alspach and his shingle, Bezier Games. You can learn a bit more about the game by watching my recent 5 Quick Questions session with Ted (or read it – we are all about the options at BGB now). If that’s TL; DW, basically this is a more ‘gamer’ development of the game Cabo, which Bezier Games brought back into print earlier this year.

Like Cabo, Silver provides players an initial set of face-down cards of which they only get to view a couple. The object of the game is to optimize the cards in front of you to get the smallest total value.

One does this by drawing from the draw pile to activate them, swapping with those cards or one from discard pile and using some special abilities. Players keep taking turns like this until they feel they have the lowest raw card value among all players. If they do, they use their turn to declare the round is over, giving each other player one last shot to optimize before comparing scores. After four rounds of this play, the player with the lowest value wins.

The difference from Cabo (which is, itself, charming and enjoyable) is that Silver gives every card special powers instead of mostly just values. Different cards allow you to swap, reveal or peek at cards, or gain a power on your turn like drawing extra cards.

Shedding cards from your tableau isn’t easy, though. The main way to shed cards is to trade them for another one in a many-to-one trade. This is done by matching cards on your tableau; if I have two 6 value cards, I can trade it with the top card from the draw or discard pile, hopefully reducing my value. Be careful, however – if you flub an exchange because you try to trade a card (even as part of a set) that doesn’t match, the trade is cancelled and you take an extra card for screwing up. Boo.

Cards number from 0 to 13, but the special powers make some cards more attractive than others. For example, the Doppleganger can match the value of other cards so she’s easy to trade out. Yet, she’s the highest value card in the game so you’ll get stuck with her if you don’t trade the card away before scores are compared. Many of the game-changing powers are on higher-value cards, but even the lowly 2-rank Empath lets you view face-down cards on your tableau. The 3-rank bodyguard (and cover star) protects another good card from being swapped or discarded, so most of them are good in one way or another.

As mentioned above, the game has a Bezier Games-signature Werewolf feel. While the initial set has some of feel of those games with Villagers and Seers, we will probably have to wait for Silver Bullet (the first expansion) later this year to get actual werewolves into the game.

Ted’s Going To Need You To Vote

So if you think you’ve got the lowest value cards, you can declare the round over or ‘call for a vote’ because Werewolf. Really, this is just to compare the total values of your cards. If you called for the vote, you best be right. If not, you get not only your card total in points, you get a 10 point penalty.

However, if you do get it right, you get 0 points for the round. You also get that nice bit of metal, the Silver Amulet. This item can be used by the round-winner to protect a card from other card activations.

After four rounds, compare final totals (which you can do on the provided score pad).

Silver is a Lovely Production

Silver’s cards are gorgeously illustrated in a Pixaresque style (they feel a bit like the film Brave to me) and this immediately excited the folks who have played the game with us.

Equally exciting for game geeks like me: Bezier Games worked with Game Trayz to create an insert that fills my heart with joy. While essentially simple in design, it’s highly functional to hold the game’s cards and those from future expansions. The amulet is a pleasant additional touch, even if its ability is the least appealing part of the game for me. I’d call that a minor complaint, this little rich-get-richer element, but it’s a quick game so those kind of balancers are less important.

Silver is a Good One

I quite like Silver and it was enjoyed by everyone with whom I played it so far. My wife was already a Cabo fiend and, indeed, she dominated the first play of Silver, winning three of four rounds. I thought the need to remember the cards (you cannot keep looking at them) would throw her off but it’s not too much of a weight on the mind.

In the end, it plays in 30 minutes or so, includes some interaction when it’s not your turn because you are watching to see what other players might reveal about their hands, and the learning curve is shallow. Additionally, Bezier was clever enough to release an app of the game (previewed in my video podcast) that is completely free. This lets you try the game out in solo play mode so you can learn the game, and see it in action. While I am enjoying the solo play, it’s no substitute for in-person play and the chance to see people surprised when you somehow slipped below their total when the cards are revealed.

Some might ask: Do you need Cabo and Silver? I’d say probably not. Silver is more fun for me, as the special powers make the game. Yet, Cabo is even more approachable than Silver (and the theme is less, um, ‘geeky.’) So maybe there’s a reason why, but I’d go with Silver over Cabo any day.

We quite enjoy Silver and we’re looking forward to Silver Bullet’s Spiel 2019 release so we can add more cards to the mix this holiday season.

Silver is available NOW on the Bezier Games site and will soon be in stores near you.

Editor’s Note:As an avowed content geek, I try new formats. People seem to love our 5 Quick Questions interviewette for tabletop designers that is a quick read. We promise no TL;DR. Let’s see how Ted Alspach, founder of Bezier Games and game designer responsible for Castles of Mad King Ludwig, SDJ 2019 nominee Werewords, and the newly-announced card-shedding game Silver, does, shall we?

BGB:Attention is money, my friend. What is the elevator pitch for Silver?

Ted Alspach: We are so excited about this one, we’ve been working on it for two years and we are finally launching it here at Gen Con (2019). Silver is a surprisingly interactive hand management card shedding game. The concept of card-shedding doesn’t happen too often; there are some small games like Golf, Cabo and Rat-A-Tat Cat and little games like that. Silver is its own unique thing in that it’s a littler heavier, more for gamers.

In Silver, each card has a number of werewolves on it. And you start with five face down; you note just two of them at that point. Your goal by the end of the games is to have as few werewolves as possible by trading cards with higher numbers for those with lower numbers. However, each card also has a special ability so you try to shed as many as possible until someone says they have the lowest value.

There’s this great amount of tension because at any time, someone can call for a vote and say they have the lowest amount of werewolves. Everyone else gets a turn at that point, because there are interactive cards and they can screw with someone or drastically reduce their cards. But if they can maintain, they get zero points, which is good since you want the fewest points, they also get to go first the next round and they also get this special silver amulet of protection to use on the next round.

Of course, if they miss it, everything goes awry and they get not just the sum of their cards but also ten points, and that’s rough for them. So that happens four times here and then whoever has the lowest score wins.

Ted Alspach: So, a couple years ago I played tons and tons for game called Cabo, which is, in a lot of ways, a predecessor to Silver and it is basically you work at getting rid of cards, reducing the cards in your hand. I did like it but it is really light and I discovered there’s this whole genre of these hand management and card shedding games. Looking into those again was looking for something a little more meaty with some interesting decisions. I didn’t see anything, so I started working around some ideas. No one has taken it to the level that I thought gamers would want, with each card doing something special. So, it’s balancing that aspect and it’s really a lot of fun. And, as a game designers, you are looking for these special abilities to balance with the points on the cards. While we were looking into it, we thought we should contact the people who did Cabo to see if they were interested in a more involved game and they ended up letting us publish a new copy of the game since they did it like 10 years ago, which we did and it includes some rules updates based on our play testing with Silver. So, Silver is a result of all that playing these other games and seeing what we could do to develop it into this big beast!

﻿BGB: There are too many games out there. What hole in my game collection does this fill?

Ted Alspach: It’s a middleweight filler, 30-45 minutes and it fills that spot. It is just as easy to learn as Cabo. Silver isn’t any more difficult to learn. You don’t need to know everything just to play the game, so it’s really easy to pick up. And we’re doing an expansion called Silver Bullet that can switch out with cards from the original. (ed. note: This is also available for pre-order and releasing at Gen Con 2019).

Ted Alspach: Okay, I have two exclusive things for you. I’ll tell you one and then I will show you something else. So, NEWSFLASH: We have four other Silver decks that are under development for Silver and we plan to release them in the next couple of years. We also have about a dozen original cards to fit into it. One of the cards in the upcoming decks is the Mad Bomber. So, points are bad in Cabo (ed. note: and Silver) and if you have the Mad Bomber, everyone ELSE gets points. (Ed. Note: To see the other secret, check out the video version of the podcast here):

BGB: Thanks for telling us a bit about Silver. Let’s wrap up with the key specifics (play time, number of players, and the link to the game) and also, since I think you can tell a lot about a person by understanding their sense of humor, what’s a good joke to close this interviewette?

Ted Alspach: The game plays in 30-45 minutes, for 2-4 players and it available for pre-order RIGHT NOW to be delivered at Gen Con 2019.

This is exclusive for the blog version of this show. Thanks to Ted for our first cartoon response to our joke question: