Sparkle*Kitty Nights is a funny party-style game that plays in 25-30 minutes and contains NSFW content.

A few months back, I played Sparkle*Kitty with my family for the first time and we had some great laughs from the simple fact that the game makes you say silly things. I recall thinking at the time that the main mechanism of the game being the recitation of words meant an ‘adult’ version with naughty stuff was going to come out.

Well, it’s here. Sparkle*Kitty Nights has pretty much the same game play that you see in the original, kid-friendly version of the game. Players need to clear their hand of cards to win by saying funny things. The cool princesses have been replaced by knights, but they are still female and now have suggestive names to amp up the amusement. To play cards from your hand, you cast spells (that’s when you say the words) by dropping a card on one that matches the color or icon of the cards on the central tableau. once you get through your hand, you’re able to draw from the tower from which you are escaping and then refilling to five cards. Some cards let you skip the hand-emptying and directly replenish your hand from the tower in your race to get out. SKN adds a cooperative element for more players and a few new concepts, but the rules are pretty much the same as the original game. 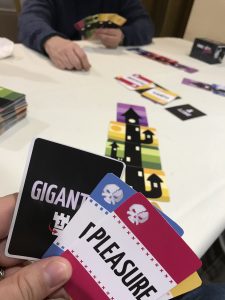 And, yes, here the words in the deck just beg to come together in ways that suggest all kinds of innuendo. We played the game at the Gathering of Friends earlier this month and had people coming up to see what we were doing because we kept ‘casting spells’ that made people wonder and want to know what was going on because we were laughing so heartily.

Sparkle*Kitty was lauded by many for the girl power of self-rescuing princesses. Sparkle*Kitty Nights doesn’t have that kind of agenda – it’s just pure fun times saying silly stuff with your friends. If you hear the basic rules and think, “there isn’t much here,” you’re missing the point. SKN is one of those games where it isn’t about the mechanisms (although the hand management is handled intelligently). It’s about the reaction you get from the people in the game. This was designed to an experience: The fun of laughing with friends as you say funky-weird stuff in an order dictated by the game. What could be better for a night in with friends who like a little suggestive humor?

As a word nerd, Sparkle*Kitty immediately appealed to me and the Nights version will probably get a little more play as an end of the night bit of amusement that doesn’t get as outlandish as Cards Against Humanity, but is more consistently amusing than Codenames: Deep Undercover.

Want to hear more about Sparkle*Kitty Nights? This video review online will give you the deets in motion:

Sparkle*Kitty Nights is live on Kickstarter and is suggestive enough to be for ages 18 and up. But adults with a sense of humor that doesn’t mind the naughty should get a kick out of it.