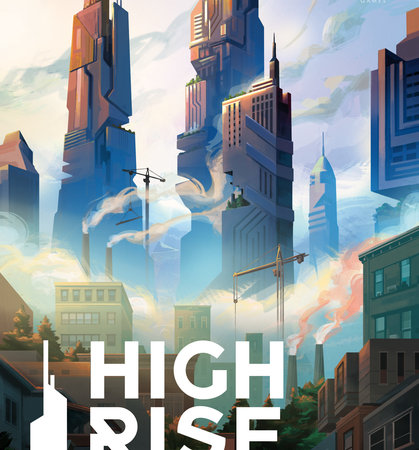 Editor’s Note: As an avowed content geek, I try new formats. People seem to love our interviewette for tabletop designers that is a quick read. We promise no TL;DR. Let’s see how Gil Hova, clever designer of games like The Networks, Wordsy, and Bad Medicine, plus the Kickstarted and shiny new High Rise, does, shall we?

BGB: Attention is money, my friend. What is the elevator pitch for High Rise?

Gil Hova: I have two. The first is that High Rise is a strategy game of construction and corruption for 1-4 players, where you build tall skyscrapers around a one-way time track trying to supercharge your actions on a board that will change for each game.

The second is that it has elevators.

Gil Hova: I built the game around an auction mechanism that I’ve never been able to work into a game. Spoiler: this is not an auction game, as I wasn’t able to work it into this one either!

Once I removed the auction mechanism, the game sung. I think it’s the best game I’ve made so far.

Gil Hova: This is a one-way time track game that gives strong incentives to make big jumps. Lots of similar games incentivize small jumps, which makes them a bit easier to play, for better or worse. Like, I’m a big fan of Tokaido (ed. note: same here), and I think part of its appeal is that its decisions aren’t terribly difficult; most of the time, you want to make the small jump. But in this game, the big jump is very tempting, and the game is full of really hard and meaningful decisions.

A rondel is a circular structure on a game board that your pawn will traverse. Each space will trigger a different action, like a one-way track. But your movement on the track is restricted; you’ll often have to pay resources to go further than 3 spaces or so. Player order is not determined by position, so it plays totally different than a one-way or time track. Imperial and Navegador are both rondel games. I’m not sure what the first rondel game was. It might be Antike, but only if you don’t consider roll-and-move games to be rondels!

I don’t want to tell you about this stuff because I find it gets pedantic and boring after a while! (ed. note: Gil is a great guy, but here, he’s just wrong…) Lines that define games are most useful when using them to figure out how to cross them and blend genres. Like, you could argue that Mancala is a rondel game, but I have no idea what that would accomplish.

BGB: Thanks for telling us a bit about High Rise. Let’s wrap up with the key specifics (play time, number of players, and the link to the game) and also, since I think you can tell a lot about a person by understanding their sense of humor, what’s a good joke to close this interviewette?

Gil Hova: High Rise is for 1-4 players, playing in 100-150 minutes, depending on if you’re playing the intro, standard, or full game. Link here: https://www.kickstarter.com/projects/gilhova/high-rise-0?ref=61r5jc

JOKE COMMENCES
A grandmother takes her baby grandson to the beach. She’s lounging on a towel with her kid cooing and gurgling next to her. Suddenly, a huge wave appears and drenches the beach. When the grandmother regains her wits, she realizes she’s okay, but her grandson is gone.

Another wave suddenly appears and drenches the beach. When the grandmother opens her eyes, her grandson is right back on the towel, grinning and giggling.

She looks up, shakes her fist at the sky, and shouts: “He had a hat!”