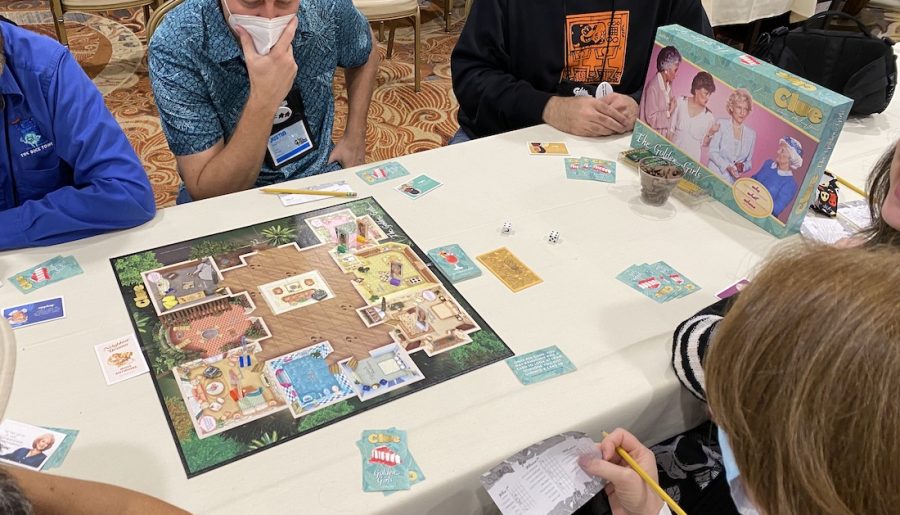 Hello again board game fans and thank you for joining me on my memory journey through the Gathering of Friends 2021. I know this has been going on for some time but I’m enjoying writing them so I hope you enjoying the reading.

If you missed the previous parts, they’re here: Part 1, Part 2, Part 3, Part 4. Plus, it appears that I will have six parts to this odyssey because I’m trying to keep the posts short enough to read reasonably in the small amount of time we all have these days.

Be Careful With “One And Done”

Expectations are tough. Since I’m a Cult of the New player, I tend to play board games pretty early in the cycle of their lives. In the best cases, I get to play them before the general consensus has been set. However, there are always games that slip through the cracks (Great Western Trail leaps to mind) and others where the buzz and/or hype hits so early that I inevitably play the board game with raised or lowered expectations. While I’ve never found the latter to be a problem (who doesn’t love to find a gem when someone told you it was a rock?), high expectations are a killer. Thus, I come to Wingspan.

By the time I played this award-winning board game, people were already falling over themselves about how wonderful it is. I read too many tweets, too many articles and far too many BGG comments about how revolutionary this release was. When I played the game, I thought it was good but I was turned off by the hype. After meeting the designer at the Gathering, I wanted to give it another go because the consensus was that this was a stellar game. I wanted to give it a fair shake. I was happy to find a table of lovely people playing it (including Alicia Zaret and Jonathan Yost – people whom I wish were 3,000 miles closer to me).

And what do you know: I liked it A LOT more than the first play. Looking back, my first play had an AP player who was also telling everyone what to do on their turns. He was also reading text from his card constantly during other players’ turns.

These details had faded from my memory, but they all came flooding back as I enjoyed the tightly-designed Wingspan. With five players, but all of whom were active, smart players, we polished off the game quickly and happily. I didn’t wait – I ordered the game while on the plane heading home. We’ve enjoyed it twice since then, including the lovely components, the detailed bird information, and the sly inclusion of unique mechanisms that are molded effectively into consistent actions. No small feat. Wingspan is an excellent gateway plus board game that I’m now happy to have in my collection. It’s also a reminder to not judge a game by one play, especially when so many people love it. Odds are, it actually is good. Being wrong sometimes is okay and actually pretty healthy.

Speaking of games that I need to give a second chance…Alicia had played a prototype with me earlier in the week as well. This one was from a designer who contacted me ahead of time after reading my lengthly article about Gloomhaven from a few years back. I’d played in a game of Gloomhaven at the Gathering and was left quite cold by the experience. It is chronicled here and, amusingly enough, this is the most popular post on my website by a fair margin. The challenge there: Most of the readers seem to hate me, or at least my take, for disliking their beloved Gloomhaven.

Now, let’s be fair: It seems that some rules of the game may have been improperly taught when I had my first foray in. This was a surprise because the person teaching the board game was a serious gamer who’d played many times. But it didn’t work out and I found the thoughtfully-designed game rather boring.

So, this new designer, Joe Bisz, contacted me after reading my article and bravely going through the nasty comments (I publish them all because that’s what one should do and some are quite witty). He had designed his own dungeon crawl game and wanted to ask my opinion about it. We convened with a group and spoke for quite a while before beginning. I found him to be a thoughtful, intelligent and imaginative guy, full of ideas but also humble while he talked about his ambition to build an amazing game.

When we got down to playing, I was taken by his story elements and world building. Gloomhaven is well-known for its execution here and this game seemed to capture that best practice. However, when we got down to the mechanisms of the game, I was less enthusiastic. While there were innovations and departures from concepts that I found stilted in Gloomhaven, the early stage of the design meant things went slowly. We didn’t get too far in before going into feedback. I think he got what he needed and we got to see the early stages of what may be the next great game in dungeon crawls. I look forward to playing this and any other games from this designer in the future.

Rock and Roll (No Writing)

Another key prototype that I played was later stage. That is Stage Left from designer and BGG personality Candice Harris. If you don’t know Candice, you should. She is full of energy and positivity for our hobby. Her board game is a big, multi-faceted euro themed to building your own music band. Personally, I love this theme and although I think Battle of the Bands is a fun take on this concept, Stage Left is a different experience and a welcome one.

Clearly drawing on her knowledge of the space, Candice gives you a chance to recruit members, sort of your influences based on who joins your band (love this), play gigs to get better and to earn money/cred, and producing songs that can help provide you bonuses as you play. Her prototype was gorgeous and well-designed to communicate about a lot of rules in a succinct way.

Adding to this fun theme, I got to play this with some great people including my buddy Ravindra Prasad, who is about as thoughtful and smart a gamer (and playtester) as there is. Ravindra had already played the game once so his insight into where the design could go was particularly astute. After we enjoyed the game (yes, Ravindra won, despite my early lead), we had a great session talking through the various mechanisms of the game.

Candice was wisely open to feedback and developed some of the proffered ideas into the play of the game the next day. Having watched the likes of Reiner Knizia, Antoine Bauza, and Vlaada Chvatil make similar quick changes to test while play testing with them showed me that Candice already had the goods to process useful feedback and improve her game. Stage Left is really fun and we had a blast playing it. I look forward to the finished board game.

I’ll close this part out with a few more published board games. Wishland is another theme park board game among the way-too-many that are out there now. When I began my own design based on this theme many, many (and let’s multiple that ‘many’ by another 10x) moons ago, there weren’t a lot. Now, we have so many that I wonder if the market is interested in my board game. The only reason I continue with my design is because it’s exactly the theme park game I personally want to play.

Wishland is one of the best ones out there right now. Using worker placement and card drafting mechanisms that make sense but still have a sense of the new, it effectively represents the experience of building up a theme park of your own. Turn to turn, you cycle your workers and use them as a kind of currency to place in locations that are already occupied or for some other needs. This reminded me a lot of Colonia from Dirk Henn, although this theme is much better and Wishland is more fun.

The artwork is good, the game play is fast once you ‘get it’ and the production quality is very nice. I would fancy picking it up myself when it comes out formally in the US (I believe it’s currently import-only).

Another quick take: The new Oink Game Moon Adventure is good stuff. Now, this is a kind of sequel to one of their most popular and compelling titles, Deep Sea Adventure. Unlike The Crew, which went from space to liquid space, this second game is sending player to the Moon and turning the competition (nasty, at that) into a cooperative experience. Players are still making sure they have enough air, they’re still seeking valuables on paths.

But now we have things like a Space Buggy at the end of the line (if you get there), a robot that follows one of the players to help add to those extra jumps across the moon, and even oxygen tanks to refill this time. In most ways, it works Like DSA, but with little “fixes” that probably plagued some players of the original game (not me). We played it twice because, like DSA, we all estimated wrong initially. IIRC, Larry Levin (who was definitely missed at GOF) is quoted as saying that DSA ‘can really inspire smart people to make dumb decisions.’ It’s an astute comment and MA is no different.

While I love Deep Sea Adventure, I’ll probably grab Moon Adventure at some point to add to my Oink collection. While I love their designs, the games don’t always sparkle for me so I acquire them slowly, usually secondhand. My collector’s spirit (okay, my OCD) won’t let me have incomplete collections so I limit myself to just Alea and Oink. So far.

My first pick off the prize table on the last night of GOF was Calico, a charming Alderac board game based on quilting with a side of cats. I passed up bigger games both due to my desire for this game and consideration of my luggage. In retrospect, I could totally have shipped that Anniversary Edition of TTR: Europe that would have delighted my wife. Ah, well. I digress.

Calico is an enjoyable romp but others describe it as an intense brain burner. As I noted to a friend on Twitter, I was never more than lightly toasted during my first two plays. In it, players build quilts by collecting and placing patches of varying patterns and colors. While you have a design to follow, you are also trying to create color and pattern combos to gain points and attract cats

Play is quick if you let it be. You play a patch and draft a new one each turn. If it creates a pattern combo, you’ll draw cats. If you do a color combo, you get buttons. Points are awarded for these items plus how well you follow your design. With this theme, I know my wife will love the game. The game has just enough going on for gamers to get interested in optimizing, while casual players can enjoy the lighter level of basic combo creation. I’m glad to have Calico on the shelf.

Okay, I think that’s about it for now. Part 6 should conclude my report with Nemesis, Dice Realms, Obsession and a few more, plus some final thoughts about gaming in these times.