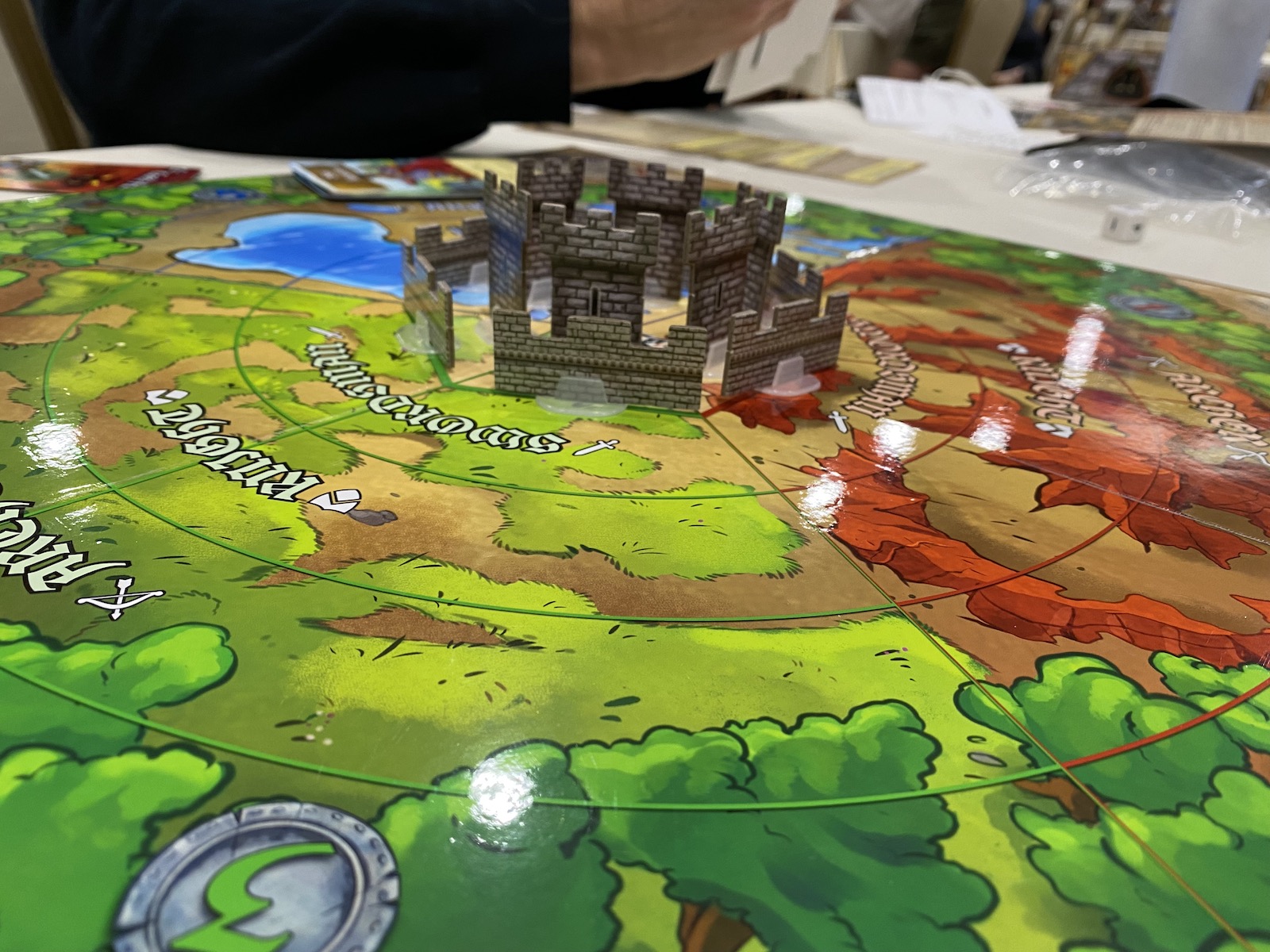 Happenstance at the Gathering will get you into some good games with great people. As I was wandering over to the massive library that the fantastic Rodney Somerstein was kind enough to bring, I was stopped by Jason Schneider of Gamewright.

I’ve known Jason via email for many years, especially when I was curating the Strategicon Library and sending me review copies would get them a podcast review and inclusion in our growing board game library. He’s a responsive, generous and pleasant fellow who exemplifies Gamewright, a company I consider a real class act. They take chances on quirky games like Bring Your Own Book (out of print now, but delightful for bibliophiles) and have also plucked some excellent sellers from the work of top designers (like Forbidden Island, Sushi Go, and the recent Abandon All Artichokes) that have connected beautifully with family audiences. I thanked him for all his support and he invited me to join a game of Fort.

Fort is my Forte

I was in immediately because Fort is from Leder Games and their games are always interesting. That said, I like the concept of Vast more than the actual game play. Root is good game with charming artwork, but it’s difficult to get to the table (due to the direct conflict?). Oath, their recent KS, was delivered to my friend and one play in, I’m not sure it’s for me. I’m going to play it more because despite it feeling like it was abstracting abstractions, it was still intriguing.

Fort promises a Leder Games experience in a shorter package. The board game is indeed a friends-in-the-neighborhood-themed asymmetric-but-not-really lighter game. Players are kids building the ultimate fort while managing their ‘deck’ of friends, knowing that any cards that aren’t used can be drafted. Is this a deck-borrowing game? Kind of, because you can grab those friends back on a future turn anyway.

Using the kid-currencies of toys and pizza, players select cards from their hand to acquire stuff to help mount their fort, set lookouts (which grant permanent bonuses), and then acquire new ‘kid’ cards to their deck. Again, the most interesting mechanism is that unused cards go into your ‘yard’ and they are available for other players to draft. There is some mitigation. You have a couple of ‘best friend’ cards that never go into the yard, so you can rely on them sticking around. But the concept of ‘play it or possibly lose it’ makes for some difficult decisions turn-to-turn.

There are more rules – some might say too many for a shorter game – but that’s the gist of it. The cards are nicely varied and I recommend the game. The only caveat is that players who dislike ’take that’ games may be put off by the frequent interaction. It’s no Munchkin, but it’s also not ideal for those who love the semi-solitaire experience of many deep-thinking euros. And, yes, the artwork is quirky and fun, like all the brilliant work of Kyle Ferrin. I won the game but it was an ‘asterisk game’ due to one rule (the number of lookouts) being missed.

Early in the con, I’d seen a copy of Riff Raff on the shelves and I wanted to play it. I love dexterity games. I’m not necessarily that good at them. In D&D terms, I’ve an 11 DEX tops, but I still have an enormous fondness for them.

Riff Raff has a huge box. That’s because it’s housing a tall pirate ship, the ocean beneath it, along with pieces that players need to balance atop the various planks and masts of the ship. Players get a set of those wonky bits and a deck of cards with numbers that correspond to spots on the ship.

Each turn, you simultaneously reveal a card and have to place one of your remaining pieces onto the ship. As you can see from the pic, some of these pieces are much easier to place than others. The same goes for the ship, with some relatively stable spots down low and much more challenging ones above.

That’s about it except for the cool ‘catching’ rule. If you should topple the ship, you’ll get stuck with the pieces that hit the water or the table around. However, if you can catch pieces, you don’t have to take those pieces. It’s a brilliant addition to this style of game and made me want Riff Raff for my dexterity collection. I know the family will enjoy the catching mechanism, especially since this is what people naturally when things start to unravel.

Panic at the Game Con

A few years back, two of my favorite people from the game industry, Justin and Anne-Marie De Witt of Fireside Games, started attending the Gathering and it was a real pleasure to see them back this year. While I got a chance to play a number of games with them, I was most excited to try their new expansion for Castle Panic, Crowns and Quests.

I’ve long been a fan of their castle defense game. It was one of my son’s favorite board games as he was growing up. Some times, we played it twice in a night. The cooperative element meant that the whole family could enjoy a victory against the orcs, goblins, and trolls from the original game. The expansions have all been must-buy additions for the Panic enthusiast. We’ve even enjoyed Dead Panic and Star Trek Panic as variants.

Coming off their successful kickstarter for a gorgeous Deluxe Edition of Castle Panic (late pledges still available), they had a prototype of the new expansion that came with it. For those who have the old game, it will also be released for the traditional version of Castle Panic. The new expansion has great new art that gives the board game a more inclusive feel. Both the game cards and the new expansion that gives each player a character with special powers now include more women and people of color. There’s even a character in a medieval wheelchair (no, it’s not Bran). I enjoy seeing our hobby make these steps forward and the new version is worth the upgrade for sure.

In addition to the special characters, which add a lot of intriguing abilities and some interesting distinction between players, the game now also features missions. The core game of Castle Panic is fun (and quick) enough to warrant hundreds of plays without losing steam. But Justin’s now devised new ways to make use of the circular map to add some variation and excitement to the game. I won’t spoil the stories but let’s just say that it’s a brilliant way to extend the interest in this game without turning it into another Legacy project.

Instead, the scenarios simply remake how you look at the standard Castle Panic board and offer new challenges. Best of all, from what I have seen, these missions are not one-and-done. They have the same Castle-Panic-goodness of replayability because of the method of implying a story through strong thematic elements without being so specific that you need novelty to make them interesting. I expect this expansion will be another must-have for fans.

Earlier in the con, I’d also played some excellent party-game prototypes from a designer whom I didn’t get a chance to ask if I could mention his games so I’ll just say that Julio E. Nazario (designer of Holi and CTRL) has some amusing and clever board games coming our way. While at the table, we also played another Fireside Games party game that kind of got lost in the COVID shuffle.

Stringamajig is a charades-style game played with a circle of string used to convey to the rest of your team what you are trying to clue. It’s an amusing variation that I played first at Dice Tower West last year and I’ve added it to my collection of party games since then. With this crowd, it was a great time because people were so into it. Yes, I love serious board games but my passion for party games is equal. I think you get to know people really well when you play games like this, which is why I always bring board games to every company I join. Stringamajig will definitely be in the bag if I ever go back to an office job.

Wow, I thought part 5 would be it but I think that one will cover: Fantastic Factories, Moon Adventure, Wingspan, Wishland, and Obsession. And I expect my final part 6 will delver into Nemesis, Dice Realms, Obsession, Belratti and whatever else remains. I’m having fun going through the whole week and I hope you are, too.