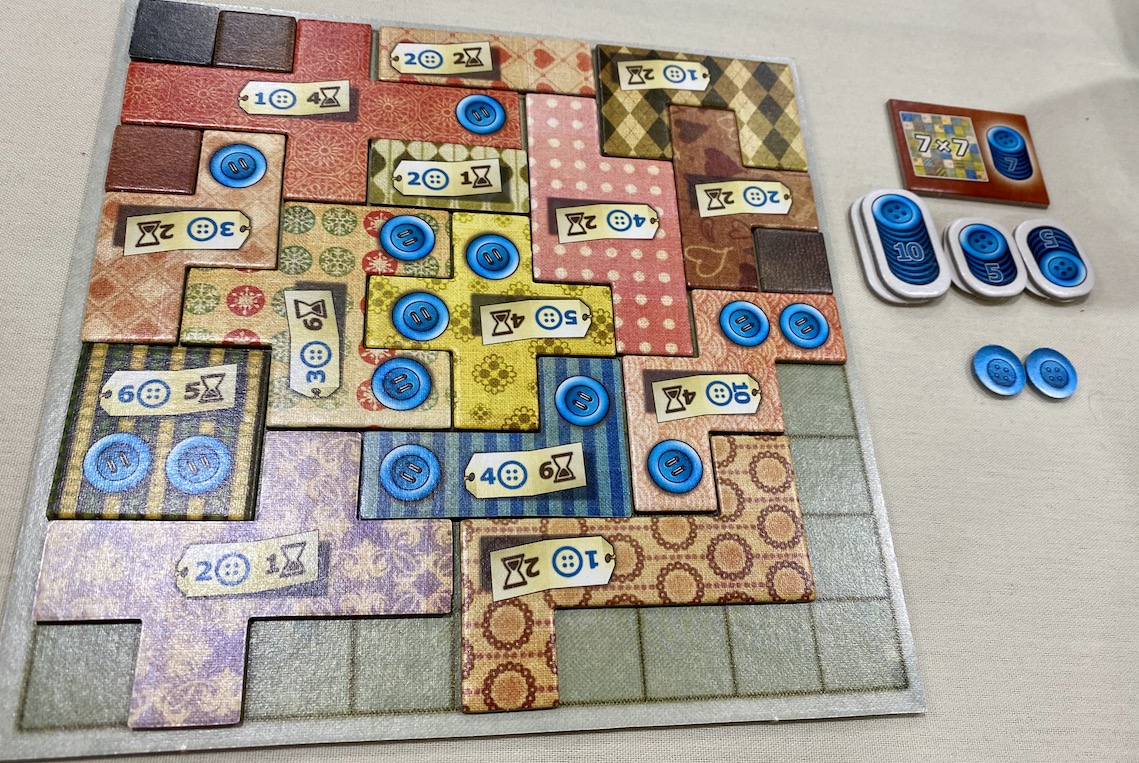 If you’re taking my GOF journey with me and missed Part 1 and Part 2, well, click those links earlier in this sentence to find them. Onward…

I really hate Facebook and only my love of board games keeps me on this horrific privacy nightmare of a platform. Professionally, there’s also a reason why, but I also just loathe what they’ve done to electronic discourse over the years. The only reason I’m still on there is for groups, and there is a private GOF one. There is also a website and I wish it were more frequently used but this year, the FB group made it handy to set up games. One that I jumped on was the chance to play Android.

I’ve been interested in this Fantasy Flight (RIP) board game for a long time. In addition to seeing how the old FFG wanted to use the world of Android for a variety of games, including their take on the classic CCG Netrunner, I talked about it with designer Kevin Wilson at a past convention. He told me a lot about it at the time, but it’s been years. So, when Erik Arneson (whose fine book you should read and enjoy) suggested a game of it, I signed up immediately. Amusingly, we were also joined by another guy named Eric. Story of my life – there are three Erics in every possible situation (and that doesn’t even include W. Eric Martin, who pleasantly addresses himself as ‘Other Eric’ in email). And you wonder why my children have such unusual names. I digress.

The Android We Were Looking For

Happily, the excellent Evan Derrick from Van Ryder Games was kind enough to teach us the game. A key perception he corrected for all of us before starting his explanation was to clarify that Android is NOT a deduction board game, even if it seems like it would be. Instead of a Clue-style specific set of details that you have to seek, Android invites the players to seek out evidence for the suspects they are dealt. Among the suspects you receive, there will be one that the player wants to be innocent and the other one should be guilty guilty guilty. This is a key way to earn points.

In addition to your suspects, players get a character card with a ‘cyber-noir’ troubled past to even out their heroic side. Players then spend their turns moving around the massive board, which has lots of pathways between the regions and locations. You visit these locales ritzy and shady (these get you extra card draws) to interrogate NPCs, collect favors of various types, and also to foil the actions of other players with cards that are specific to them. For this purpose, you draw and play from your opponents’ ‘dark’ deck. In it, each card of which highlights the quirks, limitations, and demons of the character, which can be played to hinder them.

Wow, I can only imagine what my personal dark deck would be like. The mind boggles. Again, I digress.

Ultimately, you complete tasks to put positive or negative evidence on one of the five main suspects, forcing the blame onto the one your starting card says should be guilty and setting up an alibi for the one you want to be innocent. In addition, there is a central conspiracy puzzle to which players can add pieces, earning various bonuses. This is literally represented by puzzle pieces that you build onto the theory puzzle to unlock scoring opportunities. I love this little mini-game and was delighted that my character (a hard-drinking PI) was optimized for this part of the game. That point was noted in the strategy tips for my character, which was handy.

The storytelling in Android is wonderful, which is no surprise from the masterful Kevin Wilson. The characters have strong, interesting backgrounds that you can enjoy if you are inclined to delve in (I do) and that’s probably why FFG used it in so many other games. I also really liked how quickly the game can move once you get into the groove. That said, there are SO MANY rules that can fall out of your head when taking a turn. I’m hopeful some industrious BGGer has created a good summary of reminders on the site so you can focus on just what you need turn to turn.

In the end, evidence didn’t matter for my ‘guilty’ suspect because he was killed through a concerted effort by that other Eric, who made it his mission to kill that character since Erik and I were putting a lot of evidence on him. That was definitely a personal victory for him because it takes some effort to enact that kill. However, my innocent character ended up being judged the most innocent, so I got points for her. That was handy, but I really prevailed by earning the most points through dominating the conspiracy and stacking up favors.

Android is certainly a unique experience and one that I’d welcome the chance to play again. I can see how some would be turned off by the long play time, although I expect you can cut it down a lot once people know the game. I believe a friend has it and I plan to ask for it to hit the table again soon.

After Android’s marathon session, I needed to cool down with some lighter board games. I played Patchwork with my friend June and managed a win despite her formidable ability with the game. I got lucky on setup and grabbed the 7×7 in the end.We followed this with a group games of Codenames (still a favorite and we played twice) and Just One (how could you not like this game if the table is full of great folks – and ours was). These two games belong in every collection as ideal party games for those casual players who often show up to play with the ‘serious’ gamers. 😉

Finally, I was ready for another new-to-me game of The Crew, but the new version.

Now, I like The Crew a lot but haven’t played it all the way through yet. I need to hop to it, though, because there is already The Crew: Mission Deep Sea. If you have played the award-winning (and deserving) original, you know this is a cooperative trick-taking game that sees players trying to complete various ‘missions’ by playing trick-taking rounds with a goal in mind that isn’t just winning the most tricks. Sometimes it’s all about someone winning a certain card, or having more tricks than another player. Players can use tokens and cards from their hand to share limited information as well, and this is often key to winning a round.

It’s really well done. Mission Deep Sea doesn’t change what works, but it optimizes the goals to make them a little easier to see and distribute on some cards.

Isle of Cats is one I’ve been curious about for a while. While the silly pun title appeals to my baser word-nerd instincts, I was mostly intrigued because my wife enjoys polyomino games and we are both devoted cat lovers. We have three of these fabulous beasts in our home and pretty much all cat games warrant a look for us.

I met up with my buddy Nick, who was kind enough to teach June and myself from a bit of a rules read, which got us off to a slower start. Once we got into the groove, however, the game’s five rounds happened quickly. Play consists of ‘catching’ and placing cat-based polyominoes onto your boat (‘saving them from an island’), but it’s not just Patchwork or Cottage Garden where you have sequencing limitations. Here, cats can be freely drawn as long as you have the money (um, I mean, FISH) to pay the field they are sitting on. There are two, one of which is more expensive. You also need a basket to hold each cat you save because, you know, cats.

Before that fun begins, you pass-draft cards around the table that will give you buying power, more baskets (sometimes piecing them together from two broken ones), scoring cards, and other advantages permanent and ephemeral. On board your ship, you also use the ‘catominoes’ to cover up rats that will make you lose points if they remain in view. Furthermore, you want to group your cats into ‘families’ with similar ones (same color) to score more points. Finally, scoring cards are both public and private so if you opt to take public ones, you need to remain vigilant that you aren’t handing too many points to other players with public goals. Private goals are just for you and kept secret so your opponents don’t know what you’re seeking.

There are also rules-breaking wild cats to expand your cat families, and treasures that can fill in the gaps between your felines that are also on some of the cards. I think the treasures should’ve been cat toys but I guess treasure’s universally good. After five rounds, you total everything up. From a design perspective, it’s a solid use of good mechanisms well-blended, if it fails to offer anything truly new to the hobby.

In the end, IOC is on my wish list for a trade because it will play well with casual players, the artwork is fun, my wife will love the theme, and, again, cats.

As for the convention in general, I had fewer meals out with friends than usual because I kept taking meals while running upstairs to work for a bit. Yet, I did get a lot of time to chat with people, including finding out that Stance and Cynthia Nixon, who L.A.-based gamers and longtime Strategicon folks, were also attendees. I was so glad to meet them (although I think I met Stance ages ago) so I can interview them for my upcoming writing project about the history of Strategicon. I mention it here so people will hold me accountable if you don’t see it on Kickstarter sometime next year.

Okay, that’s enough for today. Part 4 will delve into more prototypes, Obsession, Nemesis and a few more stragglers that I missed so far.