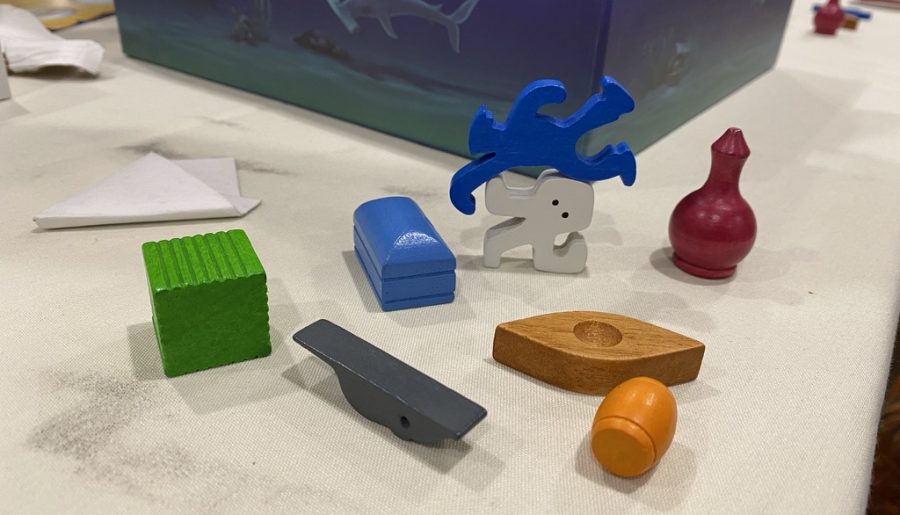 Back to mid-week at the Gathering of Friends. If you missed the previous part, well, you can find it here. Onward…

While I was in Niagara Falls, work was infringing a bit. A work friend was dealing with some personal issues so I had to step up a bit. I was happy to do it to support him during a tough time. I love games but I love my friends even more.

Early the next morning, I tried out Lost Cities: Roll and Write with a nice group of people, including my good friend June King and the always-welcome-at-a-table Bayard Catron. There’s really nothing new. LC:RAW follows standard rolling and writing on a pad. Much like the original game, players choose whether to invest in and even start certain all possible expeditions, because if they can’t get enough items in that column, they’ll lose points. Some elements from the SDJ-winning board game version (like boost spaces) are also present. I love Reiner Knizia’s designs, enjoy Lost Cities and I’d buy this as an app on my iPad in a heartbeat. But I’m thinking this franchise is wearing thin now and don’t need this box in my house.

In contrast, we also played the third in roll-and-write from Wolfgang Warsch’s Clever Trilogy, amusingly but also sensibly called Clever Cubed. Like the other two in the series, you roll and figure out the intriguing ways in which the various scoring sections interact for bonus bumps, big jackpots you can build up to over the course of the game, and re-rolls for when the funky dice selection happens. If you know this series, you know that the active player selects and locks one die at a time, but loses opportunity to roll as many dice based on how high the number on the die they selected is. Warsch is so good.

I enjoy this abstract R&W more than most because you can act on other peoples’ turns. Like Wurfel Bohnanza (a favorite of mine), players can take a mini-turn, selecting one of the dice the active player did not select. Cubed is good and maybe lighter than Twice as Clever. I joked that these trilogies always seem to have a ‘more difficult’ second game. That’s true in the Mask Trilogy, Uwe Rosenberg’s Seasonal Polyomino Trilogy, and even the recent West Kingdom series.

Continuing on, I met up with another of my favorite GOF attendees, Brent Lloyd. I love playing games with him for the jokes, the thoughtful game commentary, and the sheer fun of his personality. I walked up as he was about to teach Paleo to Elizabeth Hargrave (designer of Wingspan, Mariposas, and Tussie Mussie), who was attending GOF for the first time. I’d previously met Elizabeth playing one of Matt Leacock’s prototypes and we’d made quite a team, so I didn’t mind butting in to learn Paleo. This game was near the top of my list of ‘want to play’ games.

Like most people (I expect), I became curious about Paleo after it won the KDJ 2021 over presumed favorite Lost Ruins of Arnak. Playing the game, I could see what the jury saw – this is an innovative board game with a unique feel that hangs together better than LROK. I know, I know – you probably love Arnak. Personally, I found it to be fine but overdone. A lot of elements didn’t fold into the design as cleanly as I would have liked. I also found the solo game lacking and far too administrative. I’d still play it when asked, but I didn’t need it in my personal library.

On the other hand, I really liked Paleo, a clever cooperative game with stories to tell. Paleo gloriously implements a card-drawing mechanism that reminds me of the solo game Onirim and also Robinson Crusoe. The theme is prehistoric times, with players making up a tribe of people trying to survive and accomplish various goals as outlined in the scenario (cleverly created by combining various card sets).

Each round, players are given the opportunity to select one of the next three cards in their personal draw deck, which they have some insight about because of the card backs. Some backs suggest encountering goods players can gather (woods, mountains), another type is for staying at home and working crafts, while still another is a likely threat that you will probably need to be armed to address. Additional cards like Visions are also possible to obtain from certain actions.

You may not encounter every card, however, because this is a cooperative game and sometimes, the other players need your help. In fact, banding together is often the only way to take down big threats and key challenges. Why might you need help from the other players? Because requirements on the card will tell you that you can obtain or defeat what’s on the card based on the skills that your character cards have (usually with multiple options – as in Above and Below). These skills can be augmented with acquisitions you can find or craft (more on that later). However, if your current card is a threat, you may not be able to choose to ignore it and help the tribe.

When you complete a round, some cards are ‘trashed’ and others are put back into rotation when you go through the deck again. So, avoiding some threats will not mean you don’t need to deal with them. You’ve just delayed that moment.

Crafting is yet another well-implemented concept in Paleo. From a funky 3-D rack that you build, you can craft items for the current scenario, as well as a handful of standard ones like torches and tools. These can help you along the way to defeat challenges and acquire whatever key items you need to survive the round of play. What you need by the game end is designated upfront, so the tribe can plan what they truly need as they continue the adventure.

Paleo also allows you to reuse your characters from scenario to scenario. If you happen to die, the game gives you a new tribe member to play so there is danger and loss, but not player elimination. Between the smart design, the varied stories that conjure up memories to be told over at future game tables, and the thoughtful approach to cooperation, I call Paleo a winner that I want in my collection.

After a couple of scenarios of Paleo, we dove into a game of Krass Kariert. The game has been newly titled (for English speakers) Dealt! This new version was in our gift bags; a smart move for Amigo because this ladder-climbing game was so popular at the last GOF that we probably all bought copies. I know I did. These copies will likely be given to friends with a recommendation. I donated my copy to the Strategicon library to spread the word.

The word deserves to be spread, too. Dealt! is a quick-playing card game that has the lovely feel of Tichu without the mannered play, team element, and big swings of card luck. Of course I’ve had issues with Tichu for many years for the simple reason that before I ever learned the game, I had played thousands of hands of Daihimi and probably at least 500 hands of Gang of Four. Both of those experiences make it difficult for me to remember exactly what I need to do in Tichu and therefore I’m not much of a partner.

Dealt feels different enough from those games and I love it. Players are each dealt a hand of cards they may not rearrange (like Bohnanza) and two face-up cards. The cards are numbered from 1 to 13, plus a few special cards. Play proceeds by someone leading either a single card, a run of two or three cards, or multiples (pairs, trips). The next player must play something higher, either in rank or configuration and it’s a once-around play. If it comes to your turn and you cannot advance the trick, you have two choices. Either take one of your face up cards into your hand – placing it wherever you feel is ideal – or you lose one of your three life chips and the round is over.

Mind you, the reason for keeping your cards in order is that you can only play cards together that are adjacent in-hand. This rule for runs is a bit easier, as they can be out of order (e.g., I can play 6-8-7 as a three-card run). The choice on whether to pick up a card is interesting because you can often improve your hand with these face-up cards. And, as you play, you can also improve your hand by removing cards as well.

A few special cards round out the game. The STOP card just ends a trick and the X is wild. The best of the lot shows three cards. When played, the winner of the trick draws three cards (six are set aside during setup). Later in the game, this is ideal for stopping someone about to go out. Early on, it’s helpful because you draw the cards one at a time. This gives you a chance to optimize you hand a bit, as you add them where you choose.

There is usually only one loser in Dealt – the player who runs out of chips first. However, if two players run out of chips on the same round, you can end up with a double loser situation, as we did in our game.

I played Dealt three times at GOF but the post-Paleo session was the most memorable. All of the players were worthy (Brent, Elizabeth, and Matt) but there were some adult beverages involved. Matt and Elizabeth were cautious in their imbibing of the various whiskey offerings that Brent had for us, but I was game to try everything that he had. Yes, I think my play was somewhat affected as I ended up sharing the loss with Matt. For me, Dealt/KK is a winning card game and a worthwhile addition to the hobby.

Okay, that’s enough for today. Part 3 will include discussion of Android, another cool prototype I played, plus a few more games that I knew and played primarily for the great company at the table.