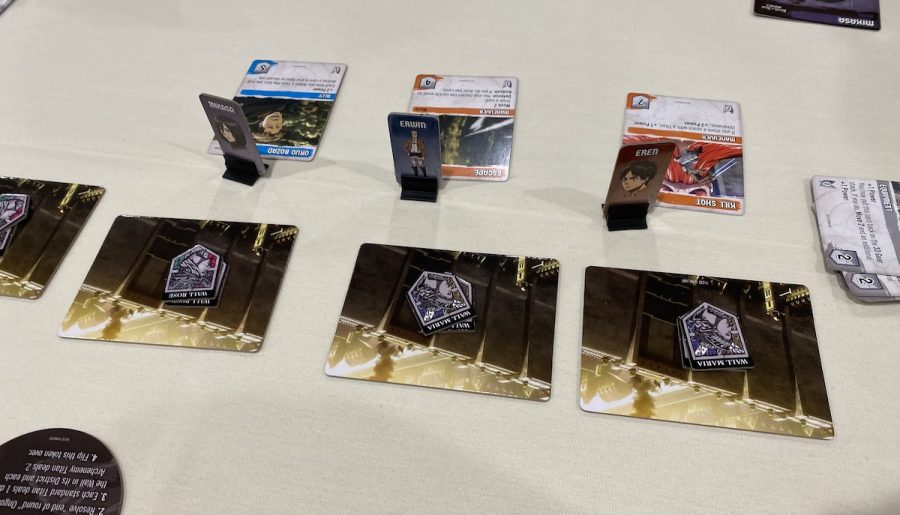 My reports on attending Alan Moon’s invitational tabletop event, the Gathering of Friends, have been as inconsistent as my old podcast schedule. When an event happens, some content may happen…or maybe not. This year, however, I am inclined to write about the experience for both my own recollection of the healing, heavenly week I enjoyed but also to allow for some to live vicariously through these words if they could not attend this or another convention held this year for whatever reason.

This was, if I understand correctly, the first time GOF was rescheduled to this time of year, due to COVID. Safety protocols were in place and while I was nervous about the travel from LA to Niagara Falls, I was confident about my safety during my time there, thanks to Alan’s firm commitment to making sure everyone would be okay. Everyone had to be vaccinated, as they well should, and ensure they had no symptoms beforehand. I’m glad to preemptively report that it would appears there were no infections from the event, as the community has been reporting negative tests consistently, although more on that later.

On to the games. I arrived later than expected, early Tuesday morning, due to last minute changes in schedule, but that still gave me a full week to enjoy the convention. While attendance was down from its usual highs (around 400?), the game room was STOCKED with board games, including prototypes from many of the designers who made the con and lots of the newest new games from here and across the pond. Sadly, that was just due to imports and not because we had the usual mix of European visitors. Tough EU restrictions meant that so many of our favorite Europeans designers, gamers, and game industry pros couldn’t make it and that even affected the plans of many of my favorite Canadians. This was a huge void but I focused on appreciating who we did have because the room was still full of so many excellent people.

After the red eye flight and a tiny bit of work, my first board game of the convention was Attack on Titan, the deckbuilding anime-themed game from Cryptozoic and Matt Hyra. I had mixed the game up with another one based on the same IP, Attack on Titan: The Last Stand from Antoine Bauza, but I was still happy to play because I was recruited by Sheila and James Davis, purported to be the owners of the largest game collection in the US, who were both familiar with the anime series the game hangs its theme on. I’ve only seen it briefly; I’m the only non-anime person in the house, but the deckbuilding mechanisms were familiar. There are some ideas I haven’t seen in deckbuilders, including the opportunity to return standard cards back for an in-turn boost.

Otherwise, it’s a cooperative game with players taking on the roles of characters from the series to defend five gates against the onslaught of titans and bad stuff coming out of a villains deck. Interspersed amongst the garden-variety titans turning out after each round to attack the five walls we were guarding, were four mega-titans (or some such) that had to be defeated first in hit points before a massive killing blow that had to be delivered in one go. This last concept with the killing blow is another good innovation for this sub-genre that I expect to see show up elsewhere. Chatting with the Davis’ is always fun, too, although I really got to talk to them more at the final Sunday dinner, where Shiela shared her admiration for the games of Ta-Te Wu, my good buddy. Always lovely to hear and share back with my friend.

After this first game, I spotted Ken Hill from Rio Grande Games just in time to join play of a prototype from Gregory Daigle. One of the great joys of the Gathering, second only to the wonderful people, is the chance to try early prototypes from top designers. I’ve played with Greg at past shows and I do love his excellent Hans Im Gluck title Hawaii (not just for the lovely theme). In this case, his new Powder and Plunder prototype brought his mix of euro mechanisms to a pirate-themed experience. The game seems pretty well along and was a good experience, particularly the innovative deck manipulation and intriguing options built into a modular board. I also appreciated the lack of forced player-vs-player interactions, which seem inevitable for so many pirate games. Looking forward to seeing the final product in the days ahead.

Following that, I enjoyed chatting with Greg, Ken and his fellow RGGer, Scott Tepper. In addition to sharing dog stories, Ken showed me the new version of Ta-Te Wu’s Promenade, which RGG will be publishing as Art Decko (yes, it’s an art-collecting, deck-building game with a punny title).

So, I broke out Art Decko with a couple of newbies and took the new version for a spin. The artwork in the new version is actually quite enjoyable and this clever take on deck building games shined yet again. AD has you buying art with your standard five cards per turn but Ta-Te’s design amps up the trashing and use of cards in intriguing ways. Instead of VP cards being dead in your hand, they are currency and assets you can put into museums for VPs based on the requirements for each collection.

Furthermore, there are additional bonuses that affect your collection as a whole or for the individual pieces of art being displayed (kind of a ‘point side-salad’, if you will). This allows you to slim down your deck, which is also possible by using some currency cards for their trash ability, allowing you more buying power for the turn at the cost of your card long-term.

Add to that variable market pricing and I find Art Decko to be one of the most satisfying of Ta-Te’s designs and a real keeper. The original version, Promenade, for which I brought a prototype to the last Gathering in 2019, must have been played with some frequency because I saw copies of the limited edition version in a lot of game piles at the event. I happily reported this to Ta-Te, who was delighted.

Later in the day, I ran into Matt Leacock, designer of Pandemic, and one of my favorite game designers. He’s also from California, so he’s attended our Strategicon conventions a few times to play test and at our invitation as a Guest of Honor. As one of the earliest fans and champions of Pandemic, I’ve been watching his output closely for years. While I’m forbidden from speaking any more about the prototype I played, I’m happy to say that he’s continuing to advance the world of cooperative games with new elements and themes. During the event, I also played two other prototypes of his, including a dexterity game that had the audience hooting and hollering with joy and excitement, and Daybreak, his take on fighting climate change.

Daybreak has plenty of information online but I’ll talk about a bit more because I really liked the game. I won’t go into the mechanisms but suffice it to say that you can clearly see in this design how Matt’s artistry has continued to evolve. While you can call it Pandemic’s bigger, more detailed brother, that’s selling short the innovation of the systems Matt has developed. Yes, it’s a cooperative game and the players are working against a crisis of global proportion. Of course, the game itself is a paper machine that kind of ‘gets its turn’. But the similarities end there, as players are asked to make more detailed decisions for the countries they are managing than running a medic or scientist around the global squashing cubes and collecting cards.

That’s not to dismiss the approachable and compelling Pandemic (which I still consider one of the greatest board games around). Rather, it’s to point out that Daybreak feels more like a gamer’s experience, with nuance that a lesser designer would make feel like ‘chrome’ on a design. Matt’s light touch instead implements intriguing decisions elegantly into hand management of various categories, allowing players to make calls about working locally vs. globally, replacing old and dirty sources of energy vs. simply adding new green solutions to meet increasing demand, or even managing the short-term thinking outrage from within your country vs. doing what is right for the future. The game is detailed and plays smoothly – no small feat.

I think Daybreak will come out and wow audiences and probably earn Matt and his co-designer a KDJ for their efforts. I was not alone in my assessment. In addition to so many others expressing their admiration for the game (and the frequent requests to break it out), I played the game with Legacy concept originator Rob Daviau and he expressed that he was ‘almost annoyed at how good the game is.” What better compliment could a designer get from another one?

Okay, that’s enough for Part 1. More to come in part two and beyond…