Session Review: Aroma: A Game of Essence by Organic Aromas 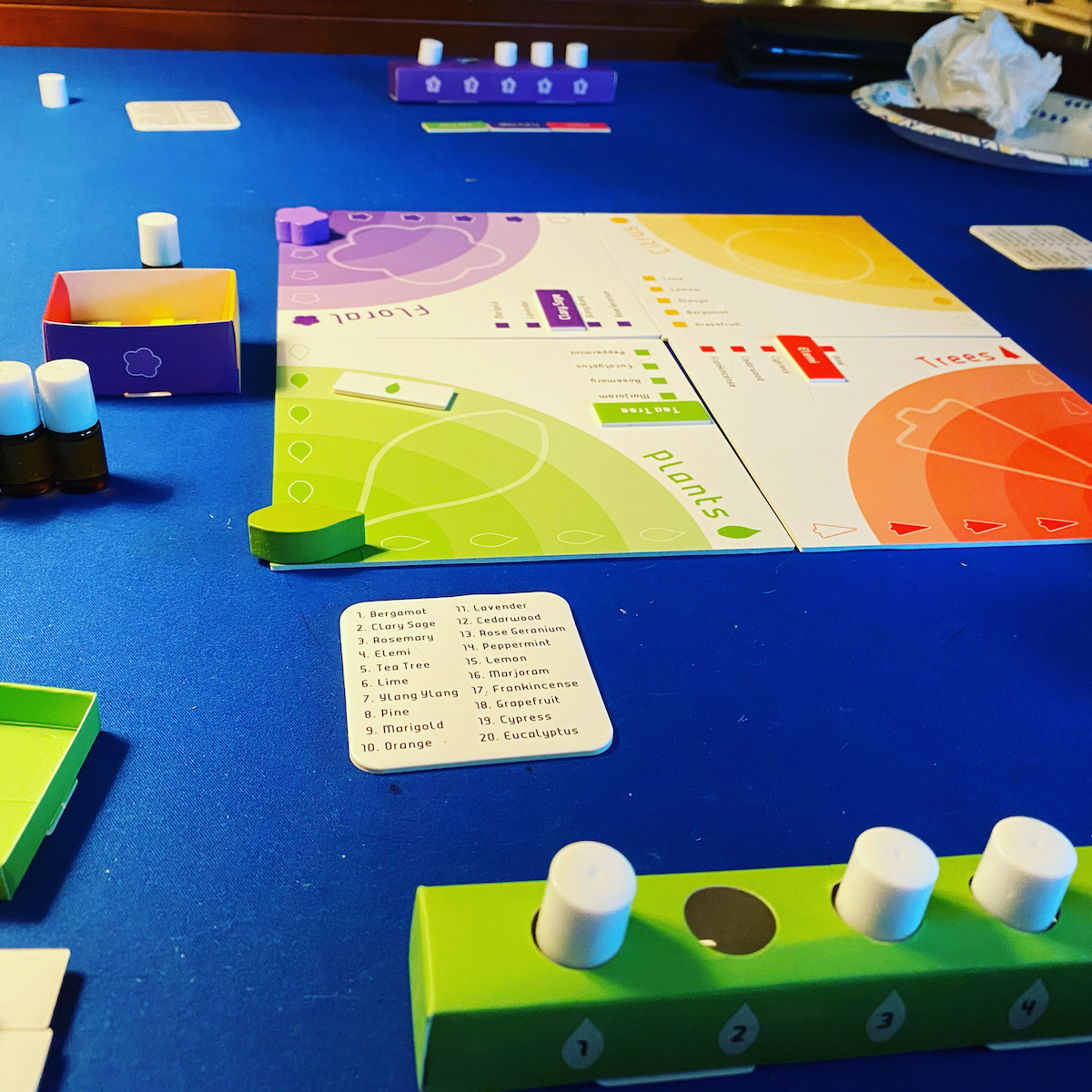 Session Review: Aroma: A Game of Essence by Organic Aromas

Disclosure: The makers of Aroma: A Game of Essence provided a review copy of the game for an independent written review.

Unique mechanisms in board games are harder to come by these days. So many games feel like Frankenstein’s Monster versions of other good games, which sometimes works. The folks who made Aroma: A Game of Essence may be drawing on some traditional game elements in their four-in-one game box, but the central mechanism is indeed unique: Aroma is all about smelling stuff.

Does that sound crass? It’s not – this isn’t a Cards Against Humanity game with disgusting scratch-and-sniff cards (ugh, I just gave someone ideas). Aroma is actually a quite lovely opportunity to smell essential oils and try to guess them in the play of a game. Within this pleasant and compact box, you’ll find twenty essential oils in four categories (Citrus, Trees, Floral, Plants) that play a central role in each of the four games you can play with Aroma.

A Whiff of Familiar Mechanisms

Yes, Aroma comes with a series of essential oils but also sturdy player boards, cubes, sets of identifying chits for each scent, and other components that are well-designed to fit into a small box while supporting four methods of play, all of which play under an hour to allow it to be pretty approachable for casual players. Each game involves sniffing the essential oils without looking at the identifying stickers on the bottom of the bottles, with players scoring points based on the specific game’s rules.

Much like the enormously popular board game Wingspan, where players can learn a lot of ornithology from playing, you can learn a lot about essential oils here, especially with the cards they provide that include scent descriptions. These can actually help during game play.

For this review, we played all four games and my perception is that most people will find perhaps two of the games to be the preferred way to play. That still provides reasonable replay value, so if you enjoy the act of trying to identify these scents, you will have a good reason to keep bringing Aroma to the table.

The Scent of Fun

I’ll be honest; my son and I both sat down to Aroma skeptical that we’d enjoy this game very much. My wife and daughter were all in, being big fans of essential oils. Yet, as we played, the speed of the games and the success my son experienced won him over quickly. He proved to be far better at identifying the tree scents (probably from his experience as an Eagle Scout) than my wife or daughter, which gave him a fighting chance in the games even though they dominated in identifying the Florals and Plants. My son ended up winning Discover and Revolve handily. My wife and daughter split the other two games, winning Collect and Survive, respectively. My daughter’s killer aggressive instincts helped during Survive, which she called the best of the games. My son found all the games solid, as did my wife. There was general agreement that any would be fine to play again amongst the three of them.

Personally, I found Collect and Survive to be the best experiences. Collect is fun and easy to explain – it’s probably the way to introduce the game as a whole. Survive’s confrontational gameplay proved fun because the interaction was strong and it gave us a chance to talk tough at one another. The bluffing in Discovery was probably the least interesting as the stakes don’t feel high enough to make it meaningful. Revolve might just not appeal to everyone with a speed-round, which turns off some people (my wife barely tried – not her bottle of essence, shall we say).

In the end, we all had a good time getting some right, some wrong and some OMG dead wrong. Ultimately, there was enjoyable trash-talking about whose nose knows best, which was a great time. I think we all improved our skills of olfactory identification during the course of these games. My daughter said, “Next time, I’m practicing ahead of time.” I guess we will get all four of us together for a next time, which isn’t always easy to do. I’m thrilled my wife and daughter want to give it another go.

What About Snooty Gamer Opinions?

Listen, it’s a game that involved sniffing essential oils. Why would you think they’d hire Martin Wallace or maybe Vital Lacerda to design it? The actual game mechanisms are basic and unlikely to intrigue the serious gamers. Yet, that’s a big advantage for a casual game like this one. Anyone can easily play as each set of rules is brief and highly approachable. Even though I basically identified like three scents properly (Orange, Eucalyptus, and Marigold, if you must know) across four games, I enjoyed the experience because everyone else thought working out a chemical sense was a good time indeed.

I do love the way they use the fine quality components to build various board setups for each game. The utility of the design is admirable and I can appreciate the efforts there. The iconography is simple and the imagery is subtle in a way that is both attractive and useful.

One knock here is the overly-cute effort to add ‘mini-games’ to the beginning of each game to determine a start player. These little activities are mostly dexterity-based and they don’t add much to the experience. A bit too much of a good thing, having all this diversity of play styles. We probably wouldn’t do most of them again in the future.

Aroma: A Game of Essence is a good board game for your friend who loves essential oils. The game is also attractive as a light party game. I believe it could play well with families or even drinking buddies who want to take a shot for each failed sniff test. The approachable rules and easy play makes it one of those games where people want to give it another go right afterward, and the modular game invites that big time. Just don’t go into the game thinking you will be figuring out a deep strategy puzzle and you should come out smelling like roses.

Aroma is available now on Amazon.com or you can check out the website from the company, Organic Aromas, who made the game, which includes many other products involving essential oils.