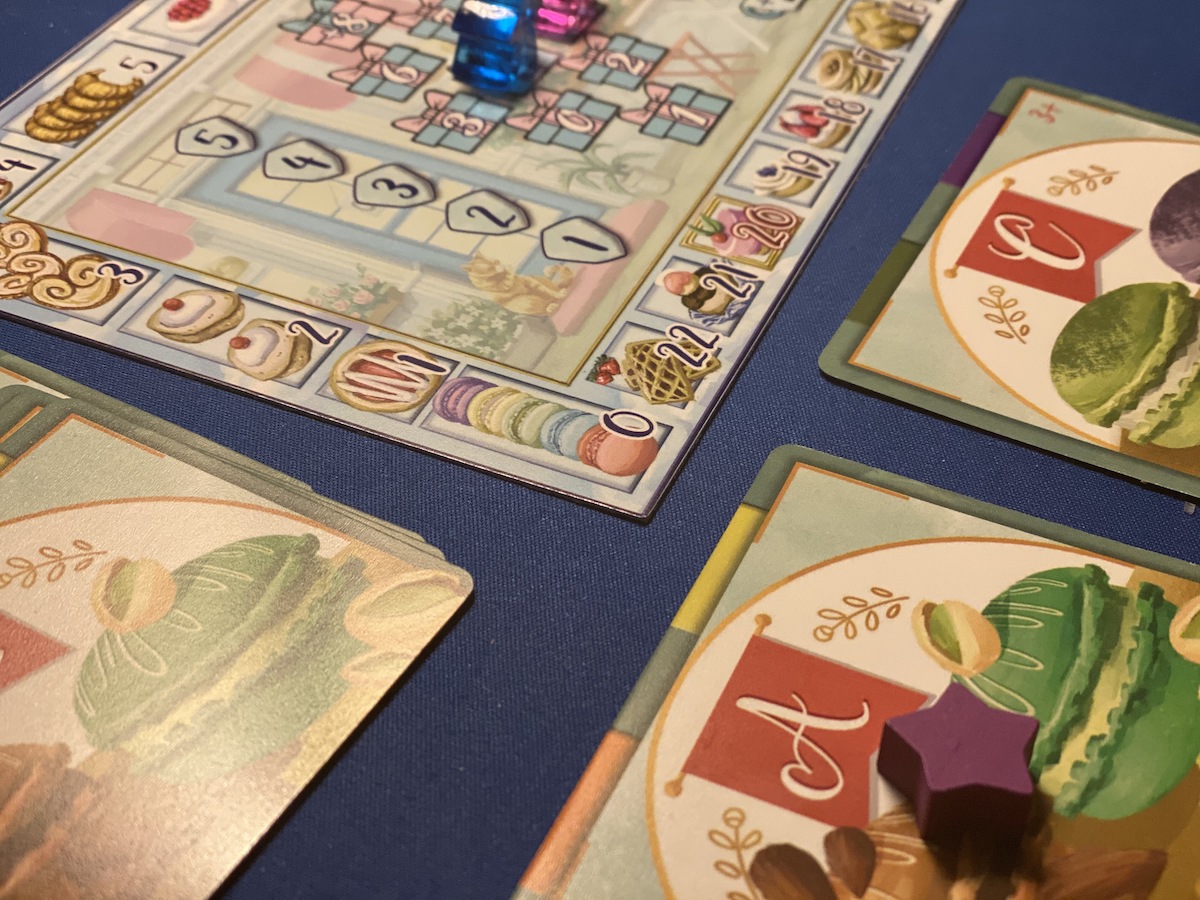 What can I say about Macaron, a delicious new trick-taking game designed by my friend and sometime collaborator Ta-Te Wu, that hasn’t already been said?

I’m not really sure. The game has received really good press so far. My positive review is just adding to a chorus of approval that has been bestowed upon this welcome new addition to the genre.

If you know trick-taking games, you are halfway to knowing Macaron. Like most in the genre, someone leads a card and you need to follow by playing a card of the same suit if you can. If you don’t have one of those cards, you can decide to get rid of a card from another suit or play a “Royal” card – hurray for a new euphemism for what we used to call these dominant card suits that win the trick over the suit that’s led. Yeah, I’m not saying the old word…

Macaron has the same number of cards as a standard deck but they are unevenly split into seven suits. Six have cards numbered one to seven and the chocolate suit has cards one to ten. Macaron has a start player token, a Royal marker and an Allergen token. Players also get tokens for the various tracks.

What’s different about Macaron includes the use of multiple Royal suits for macaron types, which are tracked on special boards and a main board that has a score track, one for bidding and a means of tracking the bonus gift boxes completed by players each round.

What is Served Up Each Turn?

The deck is shuffled and all cards are dealt to the players. Based on player number, some of this varies but check that out when you play. Players then pass two card to one of their opponents.

Bidding: Then, players bet on how many tricks they will take (shown as cookie boxes) this round. Successful bets will award points for success, losses for failure and it’s all optional.

As before, it’s trick-taking – so lead and follow. Royal cards can win a trick with the highest Royal card. But we have an opposite – the Allergens makes a trick worthless. Those cookies are the worst!

1s and 2s – These cards are special. 1s make a trick worth three tricks instead of one trick, while 2s will cancel Allergens to restore the value of a trick. It’s a nice way to make those low cards worth a little something more.

Once all the cards for the round are played, you check trick totals against bids and award points. Points vary based on the basic versus the advanced game. When someone hits ten points, the player with the highest total wins.

What Do I Think?

I like the game but that’s not a big surprise because I love trick-taking games. I like the Allergens concept, the special cards and the matched-set Royal suits, all of which makes this one a winner for me. Plus, I like games with bidding because you can do well even if the cards aren’t in your favor. This gives trick-taking games more nuance, allowing you to exploit the overconfidence of the player with a stacked hand, or just be super-scrappy and make points with low-trick bids. The control is welcome and, dare I say, delicious…

Macaron also has you covered with a solo mode, which can help in this crazy time of COVID. Add all that to the beautiful artwork on the cookie cards and I think this pleasant, light experience will make it to your table regularly. It has done so with ours.

Importantly, Macaron is approachable and new players can do well in their first game. Some trick-takers and ladder-climbing games can intimidate new players, often more so from their mannered style of play (Hello, Tichu) than from overly complex rules. Not Macaron – this will work with casual gamers and kids. I don’t have children in my house like that to play with anymore (all adults now) but I suspect that even younger children in the middle-school range will be happy to play Macaron.

Macaron is live on Kickstarter right now and it runs through 11/30 . I recommend you go all Cookie Monster and pick it up.