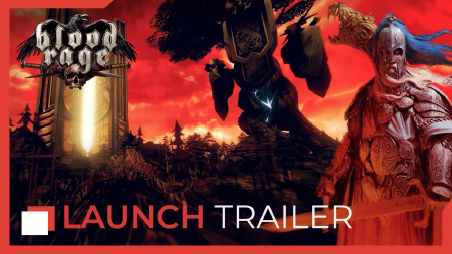 Launch Trailer: Conquer Midgard and seek victory through battle
to earn your place in Valhalla!

The faithful digital adaptation of the legendary Viking board game designed by Eric Lang, with art by Adrian Smith, is developed by Exozet. The hit board game, originally released by CMON, is the 31st all-time title according to BoardGameGeek, with an 8/10 rating. The core gameplay is focused on combat and terrain control. In Blood Rage, your goal is to achieve the greatest amount of glory before the end of the third and final age – and the arrival of Ragnarök.

In Blood Rage: Digital Edition, each player controls one of the seven ancient Viking clans: the Wolf, Bear, Serpent, Raven, Ram, Wild Boar, and Stag clan. Each one comes with its unique warriors, leader, and ship. Draft the best cards and use them to get the advantage in battle. Raid lands, fulfill quests, and upgrade your units to lead your clan to victory! The original miniatures from the board game have been digitized into 3D-animated units using high-res photogrammetry, leveraging more than 100 pictures for each of them.

You must choose your drafted cards carefully at the beginning of each Age. Prepare your winning strategy for the game but make sure to adapt as your opponents take actions or claim allegiance to specific gods. Each god is generous with unique features: Frigga provides resources and support, Tyr strengthens your clan in battle while Loki rewards losing battles or punishes the opposing winner. Deduce their plan and play tactically to counter them. Winning battles is not the only way to victory, as you sometimes gain more victory points by sacrificing your troops!

For your clan, there are many paths to Glory:

● Invade the mythical land of Midgard and its nine provinces, pillaging their villages and the province of Yggdrasil.
● Crush other clans in ferocious battles and encounter legendary creatures from Norse mythology.
● Fulfill quests in honor of the mighty gods.
● Die gloriously in battle or from Ragnarök as any Viking was born to do.

If you want to win in Blood Rage: Digital Edition, you should not shy away from a fight and a glorious death on the battlefield! The game is based around War and Glory: your goal is to achieve the greatest amount of glory before the end of the third and final age — and the arrival of Ragnarök.

● Fight to gain entry to Valhalla: Pillage, fight, sacrifice… Experience a new type of strategy game where victory can only be achieved by commanding your warriors in the field of battle in the face of final doom.
● Welcome to Midgard: Dozens of 3d scanned miniatures and a dynamic board faithful to the original board game.
● Multi-layered strategy game: Blood Rage mixes draft, hidden cards, resource management and its sheer load of trickery. Plan your strategy but be ready to adapt to your opponents’ choices: winning battles is not always the best course of action.
● Up to five Players: Introducing the ‘5th player expansion’ allowing up to five players to play together. All the miniatures from the Ram, Wild Boar and Stag clans as well as the God Gifts cards from the ‘5th Player Expansion’ of the board game are available in this digital edition for free.
● Become the greatest Viking Leader: Play solo against AI, local multiplayer via hotseat or online multiplayer with ELO ranking and leaderboards.

About Asmodee Digital
Asmodee Digital, a fully owned subsidiary of the Asmodee Group, is an international publisher and distributor of video games with operations located in Europe, North America, and China. Asmodee Digital manages the creation, design, development, publishing, and marketing of video games for Asmodee Group and third-party creators on PC (Steam), consoles (Nintendo Switch, PS4, Xbox One) on mobile (App Store, Google Play, Amazon) and VR (Oculus, PS VR…). Asmodee Digital aims at bringing the best of video gaming with a board game DNA to life with best-selling products such as Gloomhaven, CATAN, Carcassonne, Ticket to Ride, The Lord of the Rings: Adventure Card Game, Pandemic, Splendor and much more. To learn more, please visit www.asmodee-digital.com.

About Exozet
Exozet, a wholly-owned subsidiary of Endava Inc., is one of Germany’s leading agencies for digital transformation. With lots of passion and innovative spirit, the Berlin-based company creates digital solutions for and with its clients. Exozet develops digital board games, for example for the award-winning Settlers of Catan and Carcassonne franchises. Its expertise is diverse and includes development for PC (Steam, WebGL), consoles (Nintendo Switch, PS4, Xbox One) and mobile devices (Apple, Android, Amazon) as well as AR and VR applications (Oculus, HTC Vive, Microsoft Mixed Media). Furthermore, Exozet realizes user-centric products like websites, platforms and video solutions. Learn more at www.exozet.com.

About CMON
CMON Limited is an international publisher and designer of board games, tabletop games and card games. Beginning from small hobbyist roots, CMON Limited has grown into a multinational group that publishes multiple award-winning games, including Zombicide™, Death May Die™, Arcadia Quest™, Rising Sun™, Blood Rage™, The World of Smog™, Marvel United™ and many more. Known in the hobby industry for working with the top game designers, artists, and sculptors in the world, CMON Limited has built an impressive portfolio of both original, best-selling IPs, as well as licensed material. In addition to having worldwide retail distribution, CMON is also the #1 fundraising company of any type on Kickstarter, having raised over $62 million on the platform since the debut of Zombicide in 2012. Learn more at https://www.cmon.com/.