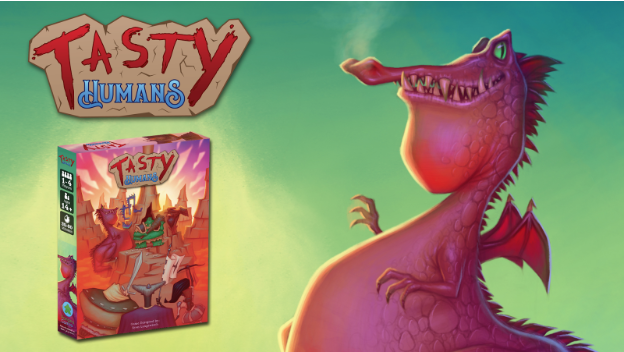 Tasty Humans is the latest board game from Pangea Games. In this puzzle-solving tile placement game for 1-4 players, insatiable monsters fill their bellies with unsuspecting villagers. Gameplay will feel familiar to fans of Azul and Sagrada.

Tasty Humans is coming to Kickstarter soon to secure funding for printing. It is a joint project from Brandon Rollins, Tyson Mertlich, and designer Ryan Langewisch.

The game began life as the winner of the 2018 Pangea Games “Panjam”, a 48-hour board game design contest. Players take on the role of fantasy monsters competing to satisfy their hunger by feasting on the local citizenry. Food comes in the form of tiles labeled peasant, archer, wizard and so on, each with unique effects. When eaten, these tiles form unique shapes of body parts which drop to the bottom of the player board stomachs in Tetris-like fashion. At game end, whoever has satisfied their beast best takes the win.

As Tasty Humans players seek to maximize monster satisfaction and score, players face a compelling puzzle with difficult choices. Designer Ryan Langewisch explains, “Each bite leads to difficult decisions with tradeoffs that impact the whole game. These choices also vary game by game as each monster has unique goals and unique leader tiles change up scoring.”

Tasty Humans is launching on Kickstarter on Tuesday, June 25 with copies of the game available for a $25 pledge plus shipping. With crowdfunding veterans behind the project, Tasty Humans debuts following rigorous playtesting and careful development. In addition to art and other assets being established before crowdfunding, the game has been available for months as a print-and-play game and is available on Tabletop Simulator.

Living by their tagline “big worlds in small boxes,” Pangea Games aims to bring compelling experiences to the tabletop. With previous crowdfunding experience, including War Co.: Expandable Card Game, Pangea’s team is familiar with the unique challenges of crowdfunding and bringing games to market.