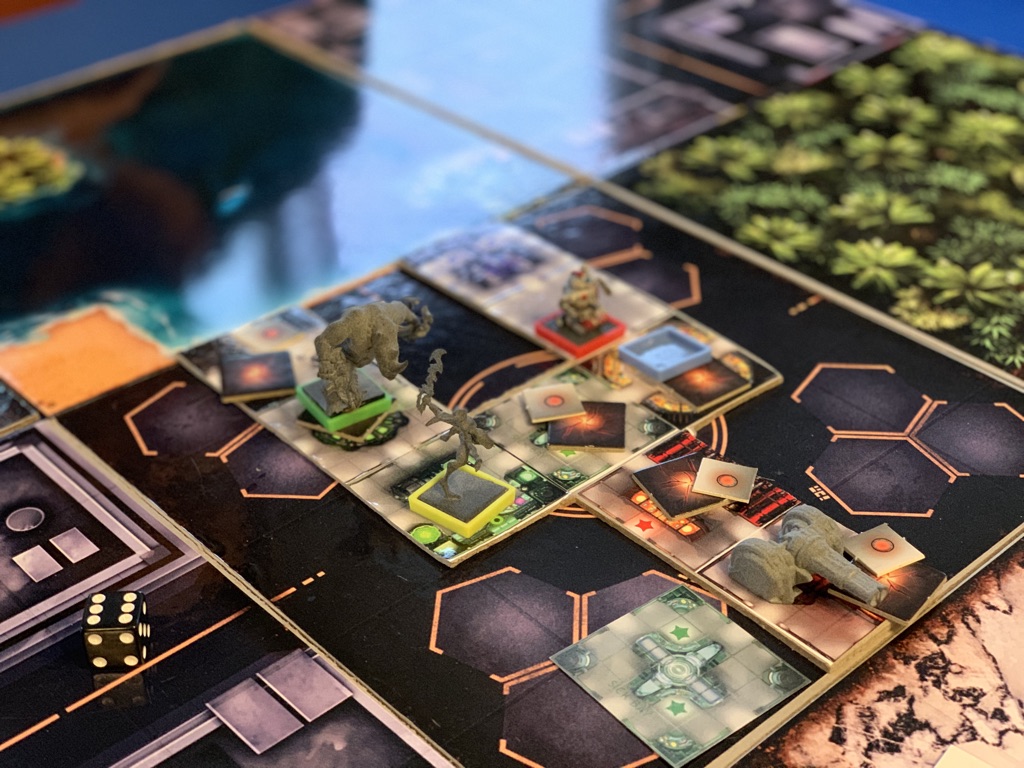 A couple of years ago, I had the pleasure of getting a visit from legendary SoCal game designer Jeff Siadek and his producing partner Joey Vigour over to my place to try out the second edition of Battlestations!, Jeff’s magnum opus. The original was a huge success, with a massive community of gamers adding to the lore of the versatile sci-fi adventure game. The new edition updated the art, mechanisms and more to bring the game to modern audiences. The Kickstarter was a rousing success so it’s not surprising that I got an email from these two gents last month suggesting it was time for the sequel.

So, after a little planning, I got a similar visit to see their next big game in the series—Battlestations: Dirtside. While the original Battlestations was focused on capturing the feel of ship-to-ship combat with a full crew adventuring into space, Dirtside brings the modularity of the system down to the planet level. Away missions were available in the original game but the scale wasn’t ideal for exploring a whole planet. Dirtside solves that problem, and adds many more adventures and scenarios to the ever-expanding game worlds Siadek and his community of fans have imagined.

What’s it all about?

Battlestations: Dirtside is a science fiction adventure game that accommodates 1-9 players, with most missions lasting one to two hours. The game can be played cooperatively or solo, or even in “scrimmage” play that moves even quicker.

The joy of Battlestations: Dirtside is the sandbox system, achieving a happy medium between an RPG, a board game and a minis game. The rules provide enough detail to get the character and adventure of your dreams while still moving along at action movie speed. Watch Jeff tell you all about it:

In the massive container, you get some exceptional minis representing a variety of intriguing space races, plenty of scenario boards, and a ruleset that will address all of your questions. Like GURPS and even the modern D&D edition, a lot of elements are reduced to standard die rolls so you can play quickly, but you can also delve deeply into the game to design and equip your character with the skills and items of your choice. You can also level them up and use them on future missions, letting that light RPG feel surface without putting a major burden on any of the players.

How does it play?

Dirtside comes with tons of scenarios that all require a bit of setup to configure the board for the game world you’re exploring, but then gameplay is pretty fast. Once you have a character, you can bring them on future missions so you can see your character progress and more quickly dive into future games since you already have one to use. Player turns are easy but engaging – make a move, take a variety of action options to drive, shoot, explore and discover on the planet you’ve reached.

The Missions library is a vital part of the game and Siadek is making sure it is large. So will that aforementioned community of Battlestations fans. Many of those, by Jeff and by others, have multi-scenario story arcs—let’s just say it: Battlestations was Legacy before Legacy was cool. Dirtside is inspiring a whole new movement within this community, who will surely build missions to scale for planetary encounters of all kinds.

“We knew that planetary experiences were constrained by the scale of the ships being used and rules specific to them,” designer Jeff Siadek told me, “With Dirtside, we needed to change things around a little bit allow whole planet events, exploration on a larger level and to offer unique experiences you don’t see in other games that try to capture the thrill of Battlestations. Our scenarios are much larger than just these missions you see in other games.”

Developer Joey Vigour added, “We wanted replay value for the scenarios, too, so there are totally different directions a mission can go and there’s like 15 threats but so you can redo the same missions again with different threads. We wanted quality stories, not just a board where you run around and shoot things.” Of course, shooting things and running around can be fun, and this is totally available in the game, too.

Battlestations: Dirtside is fun and now available to pre-order on Kickstarter

We had a lot of fun with Battlestations: Dirtside and I expect it to do well on Kickstarter. In one scenario, we dropped onto the planet trying to find the cure for an epidemic happening on another world. We managed to claim it but almost landed our ship right on top of our away team (the drift rules are clever).

A second mission had us fighting off denizens of another planet with a timeclock ready to blow up the world. We had to keep using our Luck chits to avoid the blow up and managed to escape just in time. And, yes, there was running around and shooting of bad guys—but all within the storylines.

I had a raucous good time with Jeff and Joey, who are always wonderful to see, and I enjoyed playing the unique alien races from in the game on detailed planets included in the scenario book. If you want an adventure game with old-school rolls to resolve combat and tight enough mechanisms to make the game move along well, Battlestations: Dirtside should be looked up on Kickstarter ASAP. There’s a whole lot of game time in this big box of space adventure fun.

For more information on Battlestations: Dirtside, please check out the Kickstarter page today. The original Battlestations! Second Edition is available now on Amazon.

Disclosure: Boardgame Babylon accepts no payment for reviews, previews, comments, whatever, but accepts review copies occasionally. It’s kind of obvious, but the designers came to my house and taught me the game. Yes, I’d call them both friends but I’d also call a lot of people in board games my friends and that doesn’t affect my reviews.