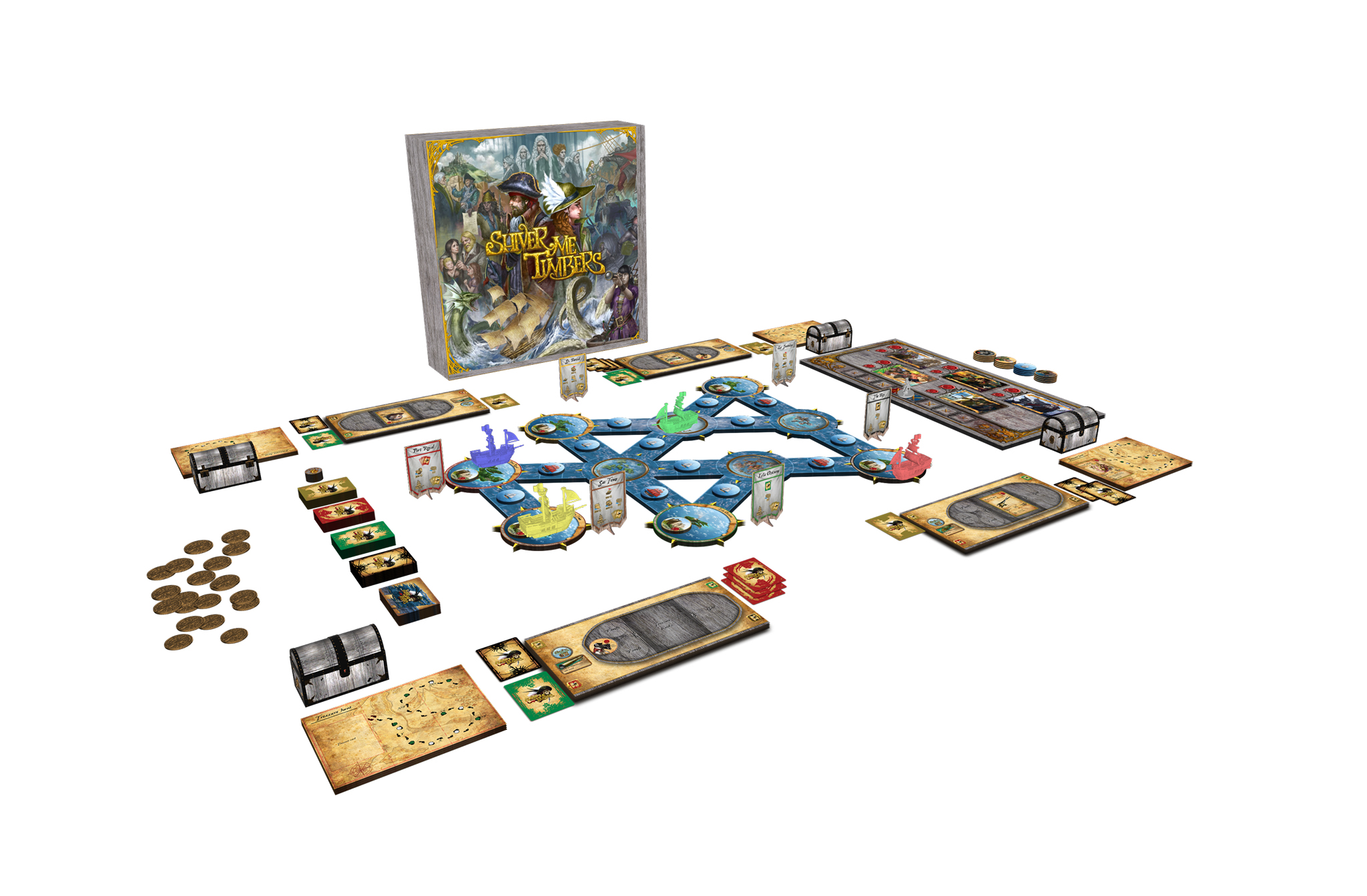 Erlangen, Germany. On May 28th, German publisher Weltflucht Verlag launched the Kickstarter campaign for his strategic, open world pirate game “Shiver Me Timbers.” The campaign with a funding goal of 38 thousand Euro will be running for 30 days.

Shiver Me Timbers is the first project by game designer and publisher Michal Vitkovsky. The game is designed for 2 to 4 players ages 14+. Depending on player count and play variant, the game takes between 90 and 180 minutes to play. During the campaign, two pledge levels will be available: the standard pledge contains a copy of the game and any unlocked stretch goals. The deluxe pledge also contains 75 metal coins and four large chests in which players can hide their treasures and their gold.

The biggest eye catcher of the game are the large modular miniatures: Players start out with a small model which they can upgrade with additional canons, sails or cargo units to increase its strength, its speed or its hull. The game board is fully modular, too. It is set-up strategically by the players after they have chosen their secret victory conditions. Combat against other players and Non Player Characters is decided by fast, tactical card-based duels, granting lots of interaction and minimizing the luck factor of the game.

In 2018, Shiver Me Timbers was successfully introduced on the Berlin Brettspiel Con and the SPIEL in Essen. Independent reviews in German and English are available via the BGG page and on the Facebook page . In addition, Jonathan Cox from JonGetsGames has provided a detailed three person play through which is available on Youtube.

Prior to the launch of the campaign, Weltflucht Verlag is raffling away a free deluxe pledge once per month. To join the raffle, gamers have simply to enter their name on the notification list available at www.weltflucht-verlag.de/shivermetimbers.

On May 28th, the German publisher Weltflucht Verlag will be launching the Kickstarter campaign for the strategic, open world pirate game “Shiver Me Timbers“. The artwork and the graphic design of the game was provided by Indonesian artist Unique Litani Soparie.

The modular game board is is set-up by the players after they have chosen their secret victory conditions. This allows for interactive and strategic decisions right from the start.

The major eye catcher of the game are the large modular miniatures: Players start out with a small model which they can upgrade with additional canons, sails or cargo units to increase its strength, its speed or its hull.

The deluxe pledge will also contain 75 large metal coins, designed as a homage to the “Pieces of Eight” popular among pirates.