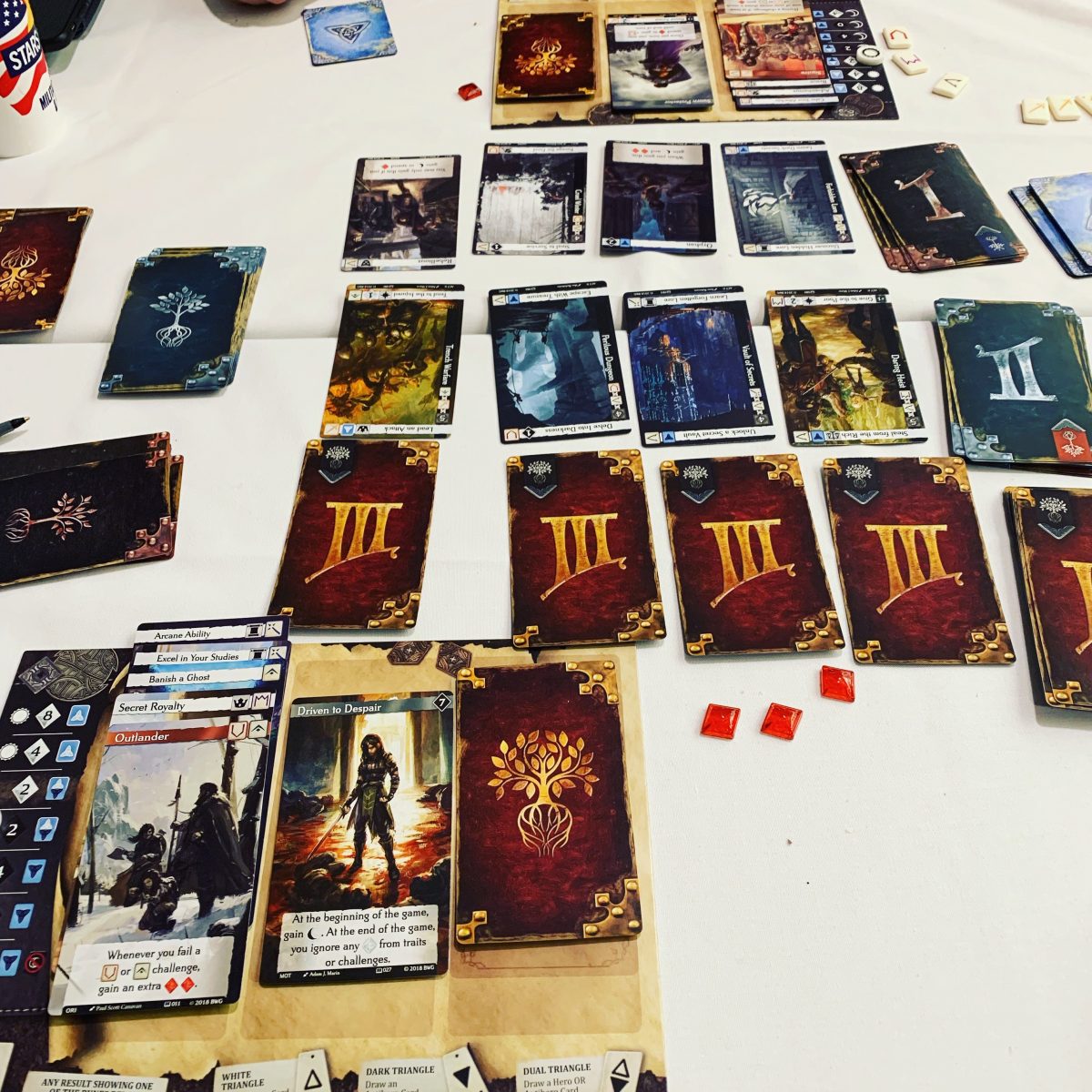 Call to Adventure is kind of a revelation. I have been increasingly interested in games that effectively tell a story while also having a tight set of mechanisms that make for a clean game. Brotherwise Games, previously best-known for the video game nostalgia-fest Boss Monster, have delivered on this combo in spades. While their Kickstarter was a hit, the game is now widely available. I believe it deserves your attention.

Let’s be clear: I love eurogames. I’m a proud eurosnoot—that term is hilarious and I embrace it (mostly because I think our hobby sometimes takes itself too seriously). But I admit that the appeal of story-driven games is compelling, especially as a storyteller myself. I have also been intrigued by games that encourage low-effort creativity and we’re seeing more of them these days. That’s not necessarily a bad term—we are in an era when people enjoy building on existing stories. Call to Adventure (CTA) engages this notion well, giving players a chance to add a bit of themselves into the game. While you the game plays effectively with smart mechanisms, (and it just sails), you also build a story that you can tell at the end of the game.

CTA starts with some cards dealt and selections made to seed the basics of your character. That’s an Origin, Motivation and a Destiny. You get two of each and get to pick one for each stage of your character’s life. Right from the beginning, this gives you a strong sense of how your character will develop over time. This can help drive the choices you make about increasing your experience and skills. Each turn, you select one of four or five face up cards for the stage you are on, with an option to discard one by spending Experience tokens.

Some cards just add characteristics and you can just claim them. Others represent challenges you need to achieve and give you two options, a top or bottom choice. Usually, the bottom one represents something harder, but the reward will be greater, too. Depending on which path you take, you’ll place an acquired card showing the top or bottom of the card to show off your reward, usually the ability to do more or a story element that can rack up points when you gain multiples of them. How do you take on those challenges and add to your skills? Well, you ‘throw the bones.’ Well, runes – that is.

The game comes with runes that are kind of like a coin toss but they are so much nicer than that. First of all, there’s a standard set you always roll, which might also give you a Hero or Antihero card (more on that later). Then, there are different runes to line up with six attributes: Strength, Intelligence, Wisdom, Dexterity…you know the rest. You earn the right to throw more as you gain experience, using the appropriate ones depending on whether its a challenge for your military prowess, knowledge, or perhaps your guile. This simple system has just the right amount of sophistication to make it not merely a coin-toss-fest, but still quick enough to keep the game moving and under an hour from beginning to finish.

When you fail at a Challenge, it is discarded but you get an Experience token to help you in the future. So, you did learn a little something.

Hero and Antihero cards can be acquired and played during the game, from both runes and cards you collect. However, your tendency to goodness and not-so-goodness are tracked with a sun/moon token (shown above left). When you’re in the middle, you can play both. However, when you go to the extremes, it can help you gain points (or lose some heroic points). This adds pleasant nuance to your character story. This is a smart design.

Each of the Attribute and Challenge cards (that you achieve) are added to your character board in one of the three slots. The next section opens when you have three from the current level. They each give you some advantage or special ability, helping you along your journey. You can double-back for a lower-level cards if you want, but this could keep you from staying on pace with your competitors, as the game will end when one player gets three Level 3 cards on their board. After a final turn, players count up their points to see who won, with totals including cards you won, played Hero/Antihero cards, Experience tokens (that are often used in the game), and any bonuses from your Destiny card.

An Individual Call to Adventure

Enjoyably, the designers built a good solo mode right into the game’s basic mechanisms. Adversaries are special challenges that lack two options but can become an integral part of your character’s story. In solo mode, one of these is pulled out and setup as a final battle for the character – giving you something to built toward for that ultimate showdown. This feature works with the cooperative variant as well.

There’s more to it, including some Ally cards that add interest to the game. But mostly, the rules take a backseat to the clever story-construction the game engenders. While you don’t have to do it, at the end of the game, you are encouraged to tell the story of your character to the table. This inspired idea helps elevate the game a bit more. Engaging the creativity of players is one of the most appealing new features of modern games that I’ve started to notice in recent days.

I’ve sung the praises of Four Against Darkness for similar reasons. While that game is fun for its mechanisms, the true joy is in writing out your dungeon with your own decorations and artwork. The upcoming Cartographers from Thunderworks Games also inspires players to not just roll and write, but roll and create their maps. More designers are coming up with intriguing ways to include some creative energy into the genre and I love it.

Call to Adventure is utterly gorgeous, too. If the appropriately 8-bitty artwork from Boss Monster made you think they were going to go on the cheap for this one, put it out of your mind. Quite the reverse, the artwork in CTA is fantastic and evocative. I expect to play a lot more Call to Adventure and look forward to their future expansions, which include one based on Patrick Rothfuss’ Kingkiller series (although maybe they should hold it hostage until he finishes the third book…).

Call to Adventure is a unique gaming experience that I really enjoyed and I think you will, too. It’s family-friendly and absolutely worth your gaming dollars. Get it on Amazon or at your FLGS, and answer the call!