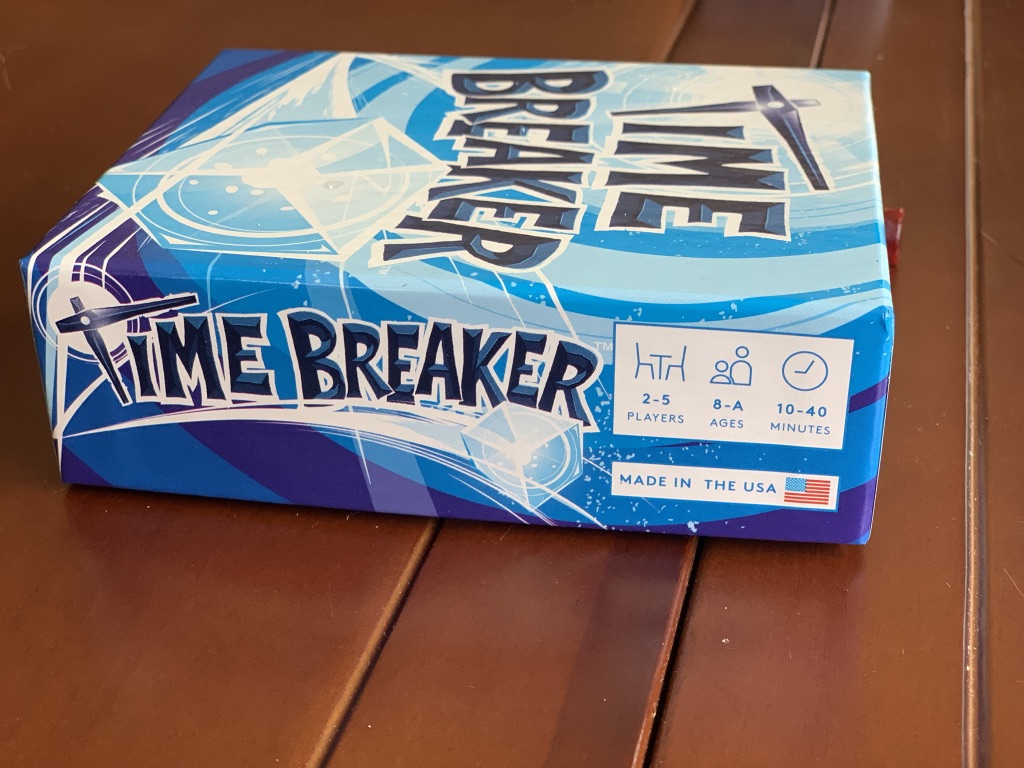 Time Breaker is another wacky game from the mind of the great Andy Looney. In the game, which is perhaps a spiritual sequel to Andy’s earlier Chrononauts, players are part of the Time Repair Agency chasing a Time Breaker through time to bring him to justice. But this is not a cooperative game; players want to be the officer to bring the Breaker in, meaning that you may actually try to stop some of the other players in their pursuit.

What’s a Time Breaker, you may ask (especially with the way Avengers: Endgame recently threw out much of what sci-fi geeks ‘know’ about time travel)? The game defines it as a criminal that is attempting to cause issues in a timeline rift. Thus, the players need to chase this temporal hooligan through a game board made up of a 25-tile grid, each representing a specific spot in history. The tiles each show a previous place in history from which you can come into the space and a secondary time you can jump to from there (denoted by red and green arrows, respectively).

Players start at the center of the grid, in the Time Repair Agency spot and they are each dealt a hand of three cards. Each turn, the active player draws a card and then does one of three things: Plays a card to move their agent or the Time Breaker, uses the green arrow to jump to the next time spot, or they do a Hail Mary option of drawing the top card and doing whatever it suggests. That last option is called a Wormhole and you get what you get.

Most of the cards that allow movement do one of two things: Either let your agent move one space vertically or horizontally, or jump to a specific time tile. The Wormhole is really only for those moments when you have no other useful option.

Some cards allow players to move the Time Breaker himself. This is helpful if one of your opponents moves onto the space with the Time Breaker to arrest him. They simply need to verbalize that they are arresting him (creativity welcome) and then the Breaker will go with them when next they move. Now, if you get to the space where your opponent has actually apprehended the Breaker, you have the option of also placing them under arrest and the first player to move away from that space will take the Breaker with them. But it’s much easier to simply move the Breaker with a card.

Breaker cards are easy to spot since they are black, and most let you move the Breaker token. Some Breaker cards actually close a time gate instead. This removes the tile from the 5 x 5 grid and flips it over. Now, if you jump to that space either from a card or tile path, you are sent to the center of the board instead. This is a welcome mechanism as it pleasantly speeds up the game as you go since getting the Breaker back to the center space is the winning condition.

These closures create gaps in the board which are traversed as if they were just not there, allowing you to move directly to the adjacent space and with the added fact that the game allows for wraparound movement from one side to the other. This movement flexibility is welcome and it grows as the game board gets smaller. Players are able to immediately walk between spaces based on using the green arrow cards and move cards. This eases up one of the game’s challenges: Movement cards directly to you want to go to scarce and the real challenge of the game is figuring out clever ways to navigate to the Breaker and bring them to justice.

Forward to the Past

Time Breaker was popular with the players at our game table. They enjoyed the fast play and movement around the board and the opportunity to foil each other’s plans just as they were about to make their way back to the Time Repair Agency with the nasty Breaker in, presumably, temporal cuffs. The efficiency of play is a factor, with serious gamers perhaps ending the game much quicker. As a result, Time Breaker has a wide timeline for play, noted on the box as 10 to 40 minutes. This is a similar time commitment to the other Looney Labs games which have can wild swings of luck on the basis of card play and options that you don’t have a great deal of control over. That isn’t a slight on the game, in my opinion, because that speed works well for casual players looking for a Fluxxy experience..

If we had any concern with the game, it’s the graphic design, which crams a great deal of information onto every single one of the game tiles. In an effort to allow people to use either visual or numeric cues, the individual tiles, which aren’t so large, feature both the image associated with a certain time tile and the actual date. This makes for a kind of messy tile that can be difficult for people discern. I would hope that if Looney Labs does a second edition of the game, they might simplify the tiles. Rather than helping, the visual searches slow the game a bit.

Time Breaker is for 2 to 4 players, ages 8 and up. For its portability and ease of play, I do recommend the game, especially for Looney Labs fans. More serious gamers may find Time Breaker enjoyable as a quick filler and to enjoy the artwork, which is charming.

In my view, Time Breaker is an excellent encapsulation of the Looney Labs brand, and fits well into their ludography. I enjoyed the game and expect to play it again as it becomes available in the Strategicon Library at Gamex 2019. The game is available now at your Friendly Local or Online Game Store and on Amazon.com.

Disclosure: The publisher provided a copy of this game for independent review, which is now being donated to the Strategicon Game Library.