Review: This Game Goes to Eleven by Gamewright 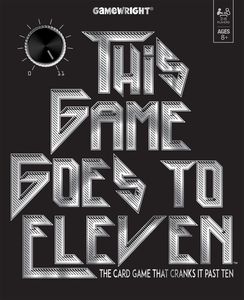 Review: This Game Goes to Eleven by Gamewright

With a name like This Game Goes to Eleven, this title from Gamewright is trading on the association with the classic cult film This Is Spinal Tap. For the uninitiated, the reference is to an immortal scene in the film where fictional metalhead rocker Nigel Tufnel explains how his amps are just better because of their dials tracking to 11 instead of just 10. Trust me, it hilarious and this game’s title will inspire a smile for anyone who has seen the film.

This casual-weight game comes with 72 amp-backed cards and a guitar pick (or “plectrum,” as the delightfully erudite Mr. Mike Siggins noted on my Instagram recently) does evokes this wacky scene with some artwork as well. Playing with 2-6 players of ages 8 and up, it’s quick one, running just about 15-20 minutes. As a filler to begin or end a game night, Eleven, can succeed in filling in the game between longer games, or to appeal the very casual player.

This is a straightforward game of playing cards to get to a certain point in value in the discard pile. Players are dealt three cards of varying values from zero to 11 (no 10 because how sad would that be?). The zero and 11 cards are something special, but most of the cards simply have a number and a hue that corresponds across the same rank. On your turn, you play one from your hard to the discard pile and draw back up three afterward.

The Power of Eleven

When the values of the cards in the discard pile hit 11 or more, the entire stack is given to a player to add to their points pile in front of them. In this way, the game plays like a variety of other cards card games including Reiner Knizia’s Escalation and Poison (now ‘Friday the 13th‘ from iELLO).

If the active player exceeds 11 in the discard stack by their play, they are forced to take those cards. That’s the basic game. Once the cards have been passed to the appropriate player, play continues with the next player. However, there are a few additional rules that had some interest to the game.

First off, there are those zero and 11 cards. The 11 card, which features artwork of what looks like a Motley Crue reject, directly sets the current stack at 11, giving the active player the opportunity to be able to handover the cards to whomever it is they want. Rock on, indeed.

The zero card has a picture of a Librarian and she will shush the value of the current stack down to a zero. She also has the power of being able to be played out of turn to cancel an 11 rocker card. What the designers were thinking when they figured that a librarian can shush a loud hair metal rocker, I don’t know. But that doesn’t give the Librarian a great deal of power in the game. The Librarian can also make for prodigiously large stacks of cards which ended up getting handed over to a player in a single go.

This option is probably the most interesting part of the game since you can use it to avoid exceeding 11 on your turn. Instead, you start a new second discard pile that is also being played to 11 or more. I am fond of this rule since it reminds me of the under-appreciated Adlungspiele game Lowendynastie, which allows you to create a secondary trick with a split matched ‘marriage’ card. Eleven isn’t as intriguing as that game, but this little flash of an intriguing rule is welcome.

As you may have surmised at this point the game is going to end when you get through the stack of cards and the player with the fewest cards is going to win. Thus, it helps to simply avoid cards there’s no real difference there and it makes for a simple goal that all players can understand. The value of the cards themselves or any of the special cards like a librarian and the guitarist don’t have any special significance, at the end again it’s just about how many cards you have. While it lacks the ladder-climbing feel of Escalation, the intrigue of the three stacks and shoot-the-moon scoring options of Poison, This Game Games to Eleven fits the bill nicely of a six player game you can play with just about anyone.

Plectrum Variant: A must for us

One more note: the plectrum included with the game isn’t just for amusement, it provides a variant that I like. The plectrum is giving to the starting player and, when someone hits exactly eleven on the discard stack, the one with the plectrum gets the pile of cards. Some will say this make for less strategic options, it does dial down (pun intended) the ‘take-that’ feel of the game. This variant doesn’t change anything about the active player getting the cards if they exceed that number and I think it makes for some interesting choices when you need to minimize card intake while possessing the plectrum. For our group, this option is a lot more appealing as we are not terribly aggressive players and liked the idea that the game was instead more evenly distributing the cards and allowing us to make the difference in the skill of play.

If you are a local, this copy of the game will be showing up in the Strategicon Game Library in time for the Gamex 2019 convention in May. Play it there to get your rock and roll on.

This Game Goes to Eleven was liked by our casual gamers and if that’s your audience, this is a winner. Serious games can enjoy it as a lighter version of fare they normally play and it’s a charming filler that can round out theme nights, too.