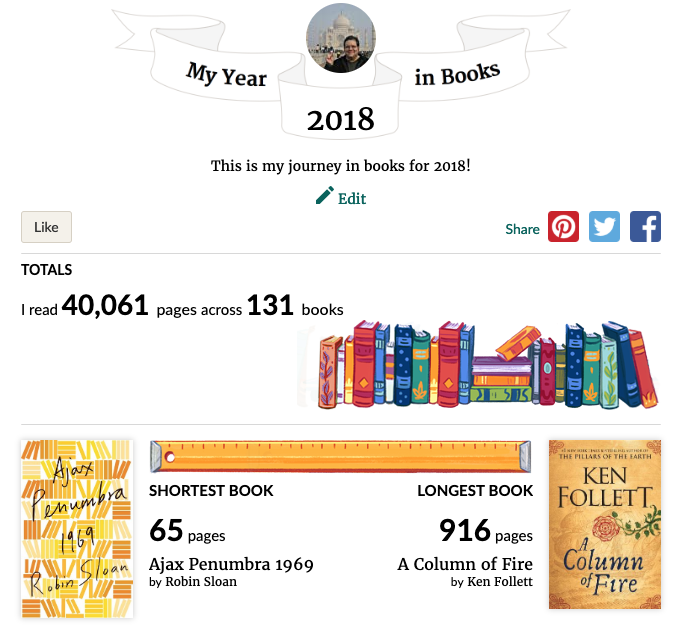 2018 was the hardest year of my life. Work became more challenging, I lost my father early in the year and my mother had an increasingly difficult time with her cognitive abilities. There was more loss, including ongoing grief from losing an aunt and uncle with whom I was quite close the previous year. Add to that the fact that my sister, who is a source of a lot of support and joy in my life, was living in England for the year again and this was just a really tough year on top of all the usual stresses of having a wife and kids to support. My son left home for college, my daughter made another school adjustment for her final year in high school and both proved to be daunting for our family.

So my solace from reading was needed more than ever. Despite these issues keeping me so busy, it was clear that I sought peace in fiction and learning from the increased number of books I read throughout 2018. I enjoy summarizing my reading year because those intimate moments with the stories and just knowledge that I gain from my consumption of prose are deeply meaningful. Sure, a lot of the content is for work, or lighter fare to amuse me. Who cares? I don’t think what one chooses to read should be put under real scrutiny, but if I read something I can recommend and help someone else find a book that helps them or just delights them, more’s the better.

In 2016, I grouped the books as I saw fit, with no rhyme or reason. In 2017, I wrote about my books with some sense of chronology and that was too tedious – I don’t think I even finished. Now, I think I’ll summarize instead to group the books together.

During 2018, I was dragged back to role-playing games after nearly 30 years. In a separate post, I’ve written about this journey back to RPGs but suffice it to say that it led me back to reading more fantasy fiction in 2018 than I had in ages. The other key factor was the publication of a new book in the Black Company series after about two decades. While the story published (which I wrote a small bit about) took place between the first and second books, I opted to do the whole series to see if I liked the later books more now that I’m (much) older. That led to re-reading other books as well, and this will flow into 2019 because I’m still running that D&D game for my son, wife and oldest friends

The Black Company Series – This series inspired me to run my own D&D campaigns back in the early 80’s. I had played but this is the series that made me want to chuck the modules out and create my own world. The Black Company is gritty, feels real and I know that George R.R. Martin says it was heavily influential on him when writing Game of Thrones. I can definitely see how he took a lot of elements of the book as inspiration: particularly, the focus on telling the stories of the bad guys.

I re-read the 10 original books in the series in 2018, from the first trilogy, which dazzled me as a young person and still held up pretty well now, through to the Books of the South, which got worse as they went, and the four-book cycle of Glittering Stone, which I found less and less appealing until the final book. The last portion, as Cook switched up narrators, felt like he was losing his way. Long sequences of boring going’s-on, and super-lazy cliched language that takes you WAY out of the narrative with its anachronistic feel (an occasional problem in earlier books) just took hold. The new one brings back his principal narrator, Croaker, also the best character in the series. While I gave it some praise in an earlier post, it was still not among his best. I’d recommend the first three to anyone, but you may lose interest after the fifth or sixth books.

Books of the South: Shadow Games, Dreams of Steel, The Silver Spike (this is an odd book that kind of happens out of sequence)

Robert Silverberg is an author that I discovered because of Harlan Ellison writing about him. They were friends and, if you believe the Ellison anecdotes, they were pretty rough with one another – in a cool way. Silverberg’s fiction is absolutely glorious, but I’d stuck with the science fiction up to this point. Tower of Glass, Thorns, and The World Inside were among some of my favorite sci-fi books that I read in college/high school. This year, I thought I’d check out his Majipoor series, including Lord Valentine’s Castle – a book I had acquired years ago, but never gotten around to reading. What a mistake! Like Silverberg’s other works, the Majipoor series are both modern in feel and classic in nature. Silverberg isn’t a ‘hard sci-fi’ writer at all. He was a talented composer of prose who knew how to pack an emotional punch in his work. I loved the first and third books in the trilogy, while the second, an episodic side-story, was good but just not as compelling. Majipoor is a rich world with interesting politics and creatures, but it’s not like your normal fantasy world with elves and the like. Silverberg crafts something uniquely his own. I highly recommend Silverberg, an author whose entire collected works are either on my read or to-read list.

Some years ago, I bought the Dark Elf trilogy for my niece, who was fascinated with them at the time. While most of the time, branded content can be pretty bad, the reviews on this series from R.A. Salvatore were solid. My wife had taken to playing a Drow Elf character (although she knew nothing more about them than what she learned viewing the enjoyable (if depressing) documentary The Dungeon Masters. So, I thought I’d read this series and get some background I could share with her.

Like so many other readers, I really enjoyed the main character, Drizzt, a noble person in a world that wanted him to be evil. Maybe it’s because in our modern day, we seem to over-love the antihero, the rogue, the broken character that I kind of found this throwback good guy (who was raised to be a bad guy) so appealing. I followed him through the first three books, enjoying his story and the exploration of the Drow elf culture. Salvatore is an author to whom I am returning in 2019, particularly to see where else Drizzt goes.

Most of my consumption of fantasy novels happened in middle and high school. There were times when I tried series that just didn’t work out for me and so I thought I’d give some of those another go. The ones that didn’t work out:

On the other hand, revisiting some other older works were a joy:

That’s enough for now. Next up, biographies and history in 2018.