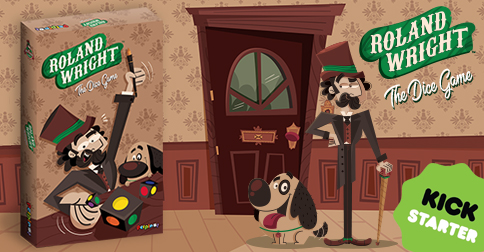 Editor’s Note: As an avowed content geek, I try new formats. People seem to love our interviewette for tabletop designers that is a quick read. We promise no TL;DR. Let’s see how Chris Handy, inventive designer of many games like Cinque Terre, Longshot and the gum-pack sized Pack O Games series, plus the Kickstarted and perhaps slightly meta game Roland Wright, does, shall we?

BGB: Attention is money, my friend. What is the elevator pitch for Roland Wright: The Dice Game?

Chris Handy: Color for one thing. I really enjoy working with lots of colors in a game (Cinque Terre, Long Shot, HUE, RUM. BOX…) But also, I wanted to create a line of games within a theme of an “old time” game designer, while really pushing the boundaries for what’s possible in a Roll & Write format game.

Chris Handy: We’re offering a creative gaming experience within 20 minutes in the R&W format. We’ve worked to make it a very tight competitive experience, while keeping it at a shorter length. Roland Wright is a game about game design integration, making mistakes, editing… and cramming as much into the box, while knowing what to exclude. This is the core aspect of the game.

Chris Handy: I’m not sure there’s anything that I don’t want to tell you, but there’s an interesting fact about the early stages of this brand. I had a few games developed for a line of Roll & Writes, and I happen to see a tweet from Daniel Solis (Graphic designer and game designer). He posted a picture of a box top of a Roll & Write game, with a faux brand called “Roland Wright”. I approached him about buying the brand concept, and within a few weeks, we made a deal. This really helped shape this game, and the games that will come next in the line…and I’m thankful for Daniel’s brilliant idea.

BGB: Thanks for telling us a bit about Roland Wright: The Dice Game. Let’s wrap up with the key specifics (play time, number of players, and the link to the game) and also, since I think you can tell a lot about a person by understanding their sense of humor, what’s a good joke to close this interviewette?

Chris Handy: Roland Wright is for 2-5 players, ages 13 and up. The game plays in 20-30 minutes. Go to www.RolandWright.com for more details.

Ed. Note: The editor has played an early-release copy of Roland Wright and enjoyed it a lot. Expect a preview review next week or so.