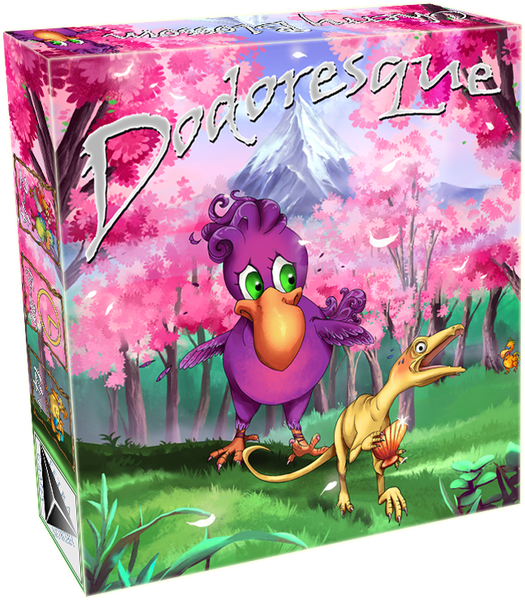 Within the Kickstarter campaign of Dodoresque: Jungle Fever in June 2018, the question came up if there was a way to play the game with more than just 4 players. The way to go was to simply combine two copies of the game.

Having mixed feelings about this, the designers/publishers came up with a second version of the game, playing pretty much exactly like the first version, but including all new artworks, characters, landscapes and new special actions – and to allow for up to 8 players on the table, when both versions of the game are combined.

Dodoresque is a funny, easy to learn and quick to play card game for 2-4 players. Each player takes the role of a Dodo, who tries to build the prettiest nest of all in order to find a mate.

To get the material cards for that nest, the Dodos have to go on adventures in card decks of 3 different difficulties. In order to get the materials, and not get eaten up by the dangers in the jungle, the Dodo players need the right action cards on their hands to counter certain effects. The game consists of 3 different actions: Adventure, Exchange and Building. On each turn only two of those actions can be played (also never the same action twice). With that the game is a constant circle of trying to get the right action cards in order to go on adventures to get better materials.

The game ends when one of the card decks is used up or one of the Dodo players has lost too many hit points to continue building a nest. To score points each material card has an individual value, it is also necessary to collect 3 different types of material and if possible, even of the same theme to score extra points.

Dodoresque: Cherry Blossom is now live on Kickstarter for just 7 days. Price starts at €15 for the game in the Early Bird Edition within the first 48 hours of the campaign.

For more Infos about the Game, check out https://boardgamegeek.com/boardgame/270229/dodoresque-cherry-blossom

or go right to the Kickstarter campaign page: https://www.kickstarter.com/projects/964263266/dodoresque-cherry-blossom-a-funny-and-fast-card-ga?ref=6f2svf