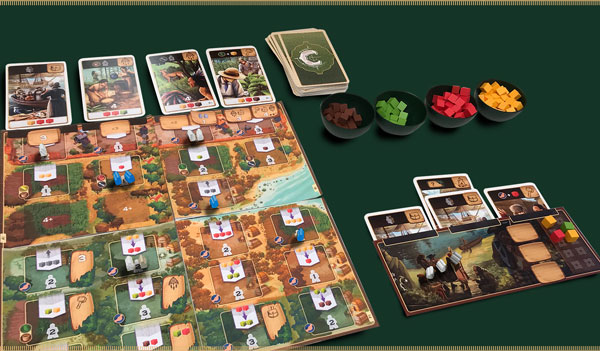 Plan B Games invites players to the conclusion of the Century series in Century: A New World! Created by acclaimed designer, Emerson Matsuuchi and illustrated by Chris Quilliams and Atha Kanaani, Century: A New World propels players to the North American continent during the 16th century.  Players serve as merchants seeking fortune in the bountiful American continent. Only the most shrewd merchants will strike out to explore the foreign land, trade with local inhabitants, journal their findings, and hunt and gather to survive.

Existing Century fans will be happy to discover Century: A New World is fully mixable with Spice Road or Eastern Wonders or both! This will provide the biggest Century fans even more ways to immerse themselves in the breathtaking Century universe!

Ed. Note: I’m quite fond of the Century series and look forward to the completion of the trilogy. While I think the experience of the combined game might be slightly less appealing than the full game, the designer has done a wonderful job streamlining the games to work together. I’m excited to see the final combo.