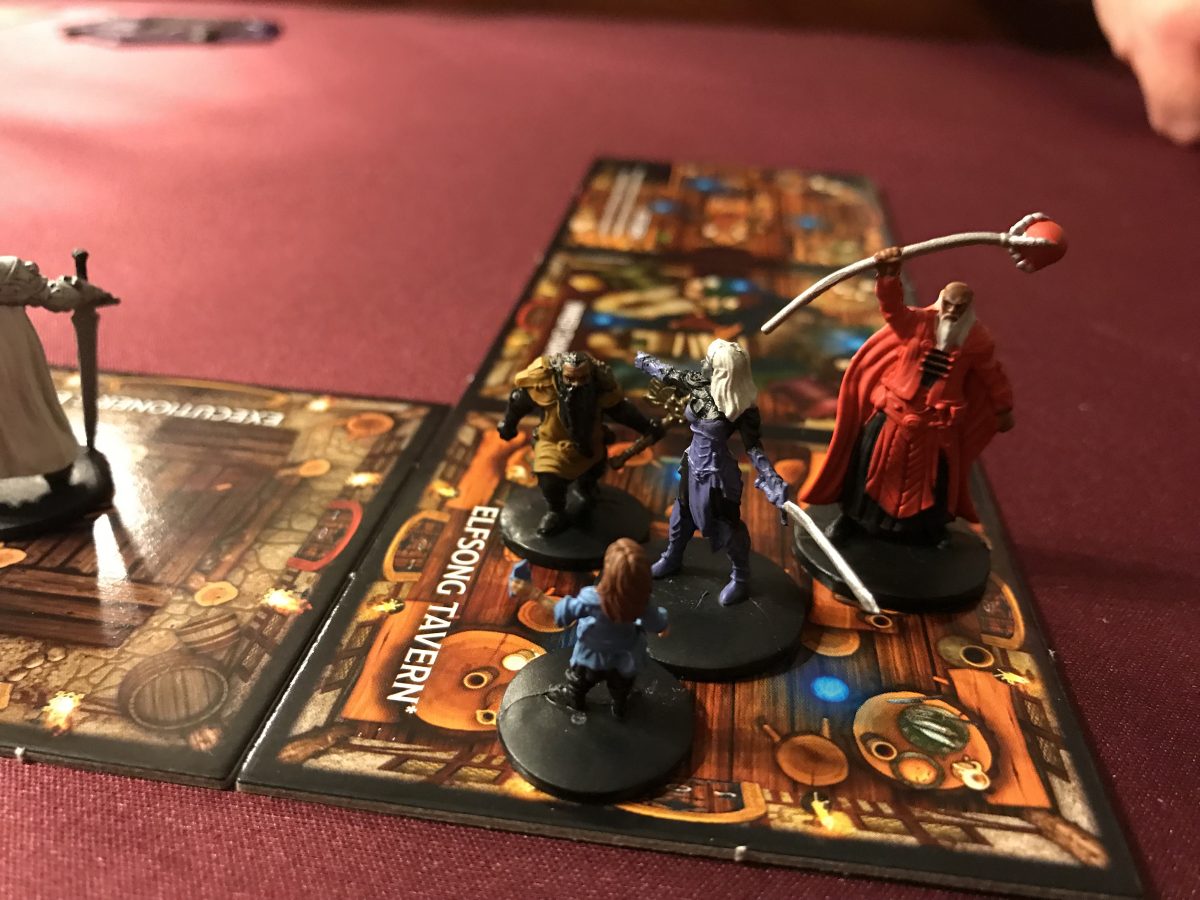 Boardgaming has been in my blood forever and I’ve been in the hobby seriously since the early 80’s, but grew up on card games with the family even as a toddler. This deep into the hobby, exploring it further is part and parcel with staying engaged. All this time in, I’ve lost none of my love for the hobby but 2018 brought about some great things and lousy things, too.

In looking back, I usually like to review my resolutions and plays. I usually set two to three per year but take it easy. They are to direct things, not to be painfully rigid.

1) Play 100 New Games – I’ve done this for more than 10 years and it’s always fun. In the last two years, I’ve hit the number early on (game conventions help) and cruised well above the value while focusing on my other resolution. This will take place again in 2019.

2) Play 300 Different Games – Well, I failed at this one. I will end up topping out at around 240. But I will try again next year because I love a variety of games to play. With my 100 new ones, that means I can go 200 deep into owned games as well. This helps with managing the collection because some of those games get a final tryout and then off to the flea market or trade pile. So, I will attempt this again in 2019.

3) NEW RESOLUTION: Play all 100 of my top games. Late in December, someone started this funny thing of ‘If I could only keep 7 games.’ I don’t know what kind of crazy world that is, but I don’t want any part of it! Someone online asked me how many could I limit myself to…and I said 100. So, I tweeted out my 100 game list. I will play all of them this year to make sure they deserve their spot on the list.

Full disclosure: I record electronic plays, regardless of whether my opponents are carbon or silicon based. This is because the experience of the play still exists in my mind so trying to invalidate those plays like they don’t exist is not useful to me. If you told someone you’d never played Race for the Galaxy because you had never played it FTF, but you’d played Keldon’s brilliant app 1,000 times, that’s not an accurate depiction of your experience at all.

Ganz Schon Clever – 32 plays (most iOS) – I hit the 300 mark on this meaty roll-and-write, then stopped playing. GSC has an addictive quality and I’ll admit many plays were after I said, “Oh, just one more play.” I narrowly missed acquiring the game over the holiday in a gift exchange so I’m not sure it will ever make the jump off iOS onto my shelf. What a year Wolfgang Warsch had with this game, The Mind, Illusions and The Quacks of Quedlinburg. Glad someone liked 2018!

300! Finally did it on Thursday night. Okay, I can now take a break from Ganz Schon Clever and play something else for a while…#boardgames pic.twitter.com/Kd3pXU4DCs

Spite & Malice – 32 plays (all iOS) – A go-to train game while I am listening to books on tape. I can play this simple game with minimal attention and I haven’t truly tired of it yet. Spite is a perfect two-screen companion, I say.

Cribbage – 27 plays (most iOS) – Cribbage was the game I most played with my Dad and this year, I played it with my son (first time) and on iOS a lot because I lost my Dad in late January. I am writing up a separate note about Cribbage, my dad and me to come out in January.

Glass Road – 22 plays (most iOS) – I love this Uwe Rosenberg game. In a fast-playing game that lasts 35-45 with experienced players, there is a lot of game. I have the out-of-production app on my old iPad but no longer on my phone so I expect my Glass Road plays will drop. I guess I will drop this number in 2019. That just means it will need to hit the table more often (it’s on my Top 100 Games List).

After four plays, a respectable score on Glass Road. I like the ios game but this makes me want to play the real thing. #boardgames https://t.co/OiyadJdDH8 pic.twitter.com/wS4YmCZH68

The Game – 21 plays (all iOS) – Another mindless game that I play on the train with an audiobook. That makes a 25 minute train ride feel like 5 minutes. Probably fewer plays in 2019 because Spite & Malice and Love Letter are more popular with me now.

Unpublished Prototype – 21 plays recorded (probably a lot more) – This tapered off in the latter half of the year due to sheer busy times. I expect it to pop back up in the New Year with some help from my buddy Ta-Te Wu.

Ascension – 18 plays – Another book companion that I can play on the train. The UGLY new update probably killed this one for me, which I’d say was an addiction before. While I deeply dislike what they did to the game’s UI, I’m kind of grateful so I could open up and play more different games.

Dungeons and Dragons – 17 plays – The headline for my 2018 gaming is my return to RPGs after nearly 30 years (last played seriously in 1989). This infringed on the board games a bit, but it made my son and friends very happy – and, thus, me. More on this in a separate post. Now is a great time to get back in, by the way, as Amazon has the $50 main books on sale for $20. It’s like the 80’s again!

The characters from Stuffed Fables from @PlaidHatGames were used as Killer Toys in my #Christmas #dnd5e game, ThebWoodland Carol of Krampus.https://t.co/EcYr4wGduA… pic.twitter.com/KPyB0k03qV

The Mind – 15 plays – All in person and probably would have been higher if we’d not misplaced my copy. Will be high in 2019 as well. This game intrigues all of the people to whom I introduce it and I feel like it’ll get more attention in the future. I still agree that Azul deserved that SDJ win, but The Mind is a keeper.

Codenames – 14 plays – This might be higher because I tend to record for a session, but Codenames remains a wonderful pre-gateway party games. And with my homebrew holiday editions hitting (and one especially for my company), we’ll always play some number of Codenames games. My wife also got Codenames Harry Potter for Christmas and that will surely come out soon.

One Deck Dungeon – 14 plays (all iOS) – This is an attractive iOS game, much more enjoyable than playing the game in person, which I found fiddly. But I expect to buy the DLC for this one in 2019 and keep playing it as a pleasant second-screener. This is definitely the case (also with Friday, another high-play game for me) where I think the app experience beats the physical game hands-down – if purely on administration.

Azul – 9 plays – I’m surprised this isn’t higher. Azul is a wonderful old-school euro with gorgeous pieces that I’d always enjoy playing. No surprise it came from a master like Michael Kiesling, who also had one amazing year with the glorious Heaven and Ale. We also have the new version, Azul: Stained Glass of Sintra, which is a pleasant variant but won’t replace the original.

Four Against Darkness – 7 plays – Another sign of the return to playing more RPG-style games. I was intrigued by this solo-style game that you play and also draw out as a kind of art project.

Terraforming Mars – 7 plays – Well, it’s just a great game. Yes, the graphics are wonky. Yes, it’s swingy on luck and the variants are too numerous. But is there any more compelling theme? Not for this lover of science fiction and space travel. I even read Red Mars, the book that inspired the game, this year, with plans to hit the other two in the series in 2019 (it’s really hard-SF for those who might consider it).

Simon’s Cat – 7 plays – This simple game caught my attention after buying it on clearance. I didn’t know the charming cat-based web series, but it had a cat and it was cheap. As a pleasant, light trick-taking game, Simon’s Cat is a winner. It helps that Liam, one of the charming sons of my good friend, took a liking to it and he’s made sure Simon’s Cat is on the list for each game day. That’s always a welcome request.

I’ll be honest – I wish I’d played more heavy games this year. I wish I’d played more games head-to-head with my son, who is now away at college during the week. I wish I’d had more time to spend on game design. But 2018 was the hardest year of my life, in terms of loss, profession, and immediate family needs. I’ve forgiven myself for those things I didn’t get done this year and achieving board game goals is the easiest of the lot. As I used to say on the podcast, it’s only a game. That’s one thing I really love about this part of my life.

Yes, board gamers compete and play hard. But considered how much of the rest of my life has stakes that are ridiculously high, this hobby (and my reading) is the place where I can just have fun and spend time with people I like. It’s the way I refuel for the hard stuff. It’s the best method of relaxation and while some might feel the stress of gameplay, this is all good stress for me. Thank goodness for boardgames, I say – and for a New Year in which to work, love, achieve and – definitely – play.