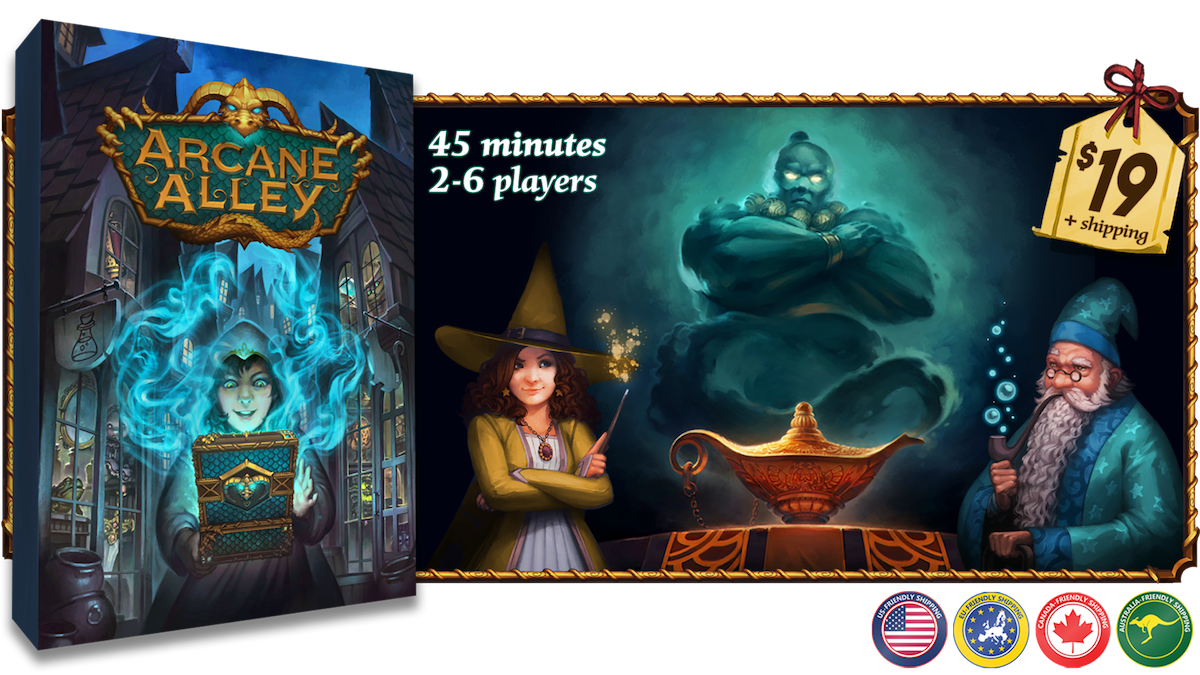 Arcane Alley is a new game from Strange Space Games, now on Kickstarter until November 29th.

Editor’s Note: As a kind of content geek, I try new formats. People seem to love our interviewette for tabletop designers that is a quick read. We promise no TL;DR. Let’s see how Corwin Riddle, designer of the new game Arcane Alley does, shall we?

BGB: Attention is money, my friend! What is the elevator pitch for Arcane Alley?

Corwin: Oh boy, this combines my two biggest fears—heights and answering under pressure. I assume it’s too late to hit the STOP button?

Arcane Alley is a light tableau and collection card game for aspiring wizard merchants trying make a fortune on the black magic market. Sell sets of infamous enchanted items for gold while keeping an eye on the competition and getting rid of any evidence before the alley is inspected.

Corwin: For the mechanics, my friends and I were playing a lot of 9-card Golf and just wished it were more complicated, while still keeping some of the set collection and the idea of not wanting your cards, which is pretty unique in tableau games.

At first, I tried really hard not to make a new game! I was adding mechanics to the existing game, and then more, and finally I threw my hands up in frustration, cursed the heavens, and shouted: “Fine! I’ll become a game designer!” I didn’t witness it personally but I can assume there was almost immediately a thunderous bolt of lightning somewhere, in the distance.

As for the theme, once I knew these things (cards) would be unwanted and removed during the game, it made sense to have them be some kind of illegal goods. I went through a few different “normal” black market ideas, and one day my friends and I were just joking about it being wizards—these powerful, enigmatic, educated masters—selling their enchanted collections for gold in a back alley, and that was that.

I called it “Wizard Wares” at first, going so far as to have a logo for it, but there are too many things with the word “wizard” in it on the internet, so here we are in Arcane Alley.

Corwin: This fills the hole of having a great game for groups with varying levels of gaming experience.

It works for any group, but if you have a few casual gamers and a few heavy gamers all together, and you don’t want to play Catan or a party game, then we’ve got your fix. Plus, it plays up to 6 players (up to 8, if we hit some stretch goals) and scales really well, so you can bust it out in larger groups if you’re tired of social deduction games and want a strategy game that doesn’t take forever.

It’s light and easy enough for casual players to learn without feeling overwhelmed, while being deep and interesting enough to keep serious gamers engaged. You can go for sets and not worry about maximizing every part of your storehouse, or you can plan turns ahead and set up combos to make the absolute most of every play.

And the art is beautiful! Think of how gorgeous it would look, sitting on your shelf. Until the inspectors arrive and confiscate it, of course. But until that moment—what a beauty!

Corwin: I spent easily half the time designing it working on the flavor text and visual jokes on the cards. The game is good, I promise, but now you know where my real priorities are.

BGB: Thanks for telling us a bit about Arcane Alley! Let’s wrap up with the key specifics (play time, number of players, and the link to the game) and also, since I think you can tell a lot about a person by understanding their sense of humor, what’s a good joke to close this interviewette?

And I don’t know about good, but this seems fitting:

Q: What kind of tests do wizards take in school?

…that joke is banned in the alley and rightfully so. (Editor’s Note: Agreed.)

Want to read more of these 5 Quick Questions articles? Sure you do.