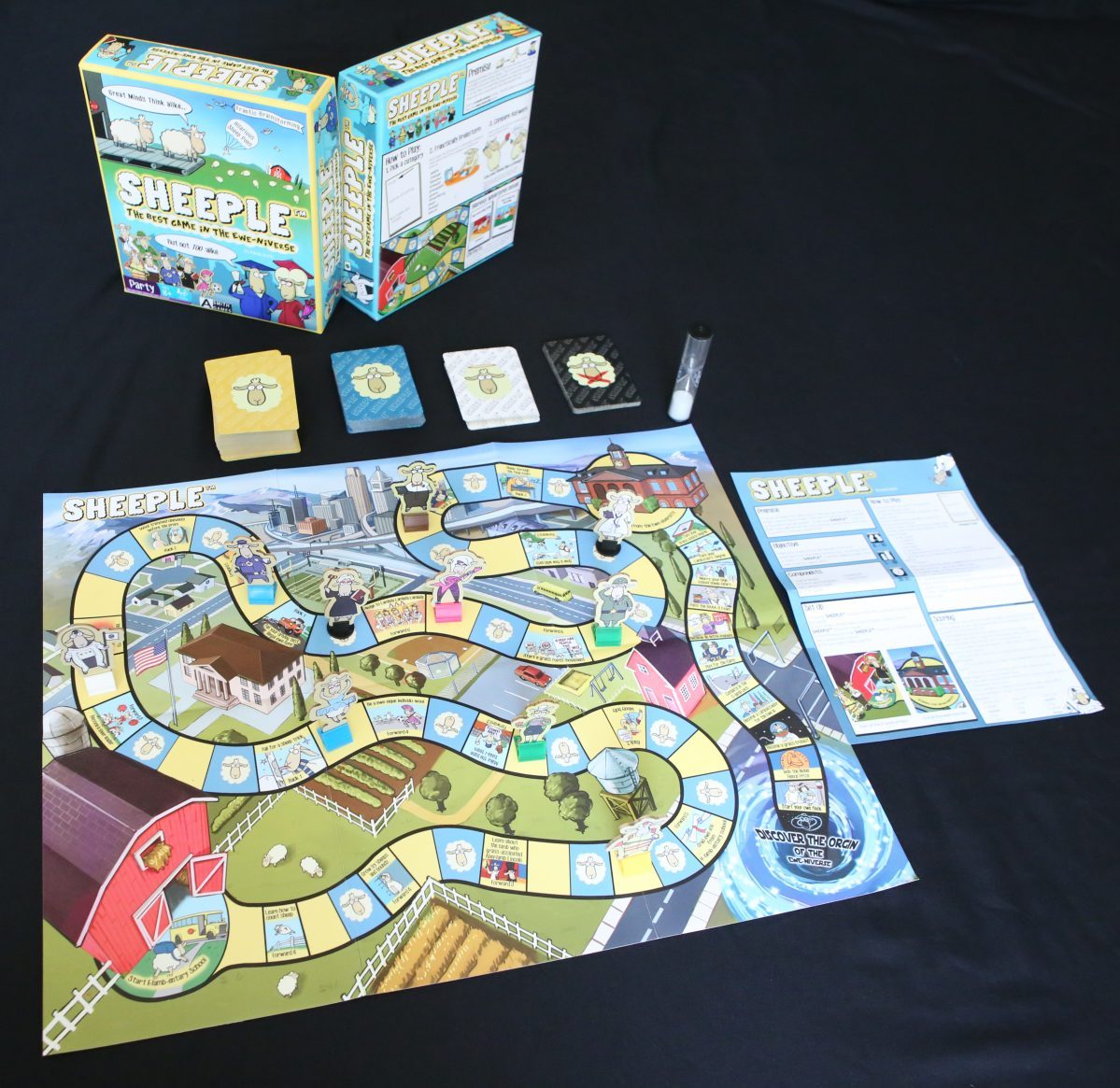 A Smith Games (designer of Old World New World) is launching our first Kickstarter campaign, for SHEEPLE: The Best Game in the Ewe-niverse on October 23rd.

Over the last eight years, I’ve had the game played hundreds of times with different groups of people of various ages, with different types of tastes in games.  Children fall in love with the game, and it’s a blast to play with adults as well.

The game is art and design complete.  The campaign will ask for $25 a copy, with free shipping to the US, international-friendly shipping, and bulk discounts.  The campaign will last 24 days, starting October 23rd, and ending November 16th.  All backers can expect to receive their games by May 2019.

In the game, you’re a sheep who’s trying to become a sheep-person.  You start at the E-lamb-entary School, and the first player to graduate from the Ewe-niversity wins!
Each turn, a player picks a category, and each player has a minute to write down as many items as they can think of.  They, they compare answers.  You only score points if other players also put them down.  So to win, you must Think like a Sheep!
However, if answers are a little unique (only two players match), they score double points, so SHEEPLE encourages both inside-the-box and outside-the-box thinking.  As a natural creative, I wanted game this to stimulate the creative side of the brain.  It turns out that rapid brainstorming for a full minute is a little difficult – most people go brain dead after thirty seconds.

However, SHEEPLE pros are able to continuously generating new ideas, while keeping in mind answers that their friends are likely to put down.
Sheep puns are very key to the SHEEPLE world.  The game contains around 80 sheepish puns, with a special game mode available where players score extra points for incorporating sheep puns into their answers.
I’ve had a lot of fun marketing this.  Here’s a SHEEPLE Rap Video I made, as well as a Star Wars Parody at the San Diego Comicon.  Running around dressed like a sheep at Gen Con was a hoot as well.  I even ran a Matrix-themed giveaway with secret sheep-themed messages.
Stretch goals will include new characters and cards, and Spot UV for the box, with Kickstarter backers being able to vote on the stretch goal they would like to see next.

Expansions: I really want to include all types of players.  There’s an NSFW expansion for people who enjoy Cards Against Humanity, and a Christian expansion available for people who want something to play with their youth group.