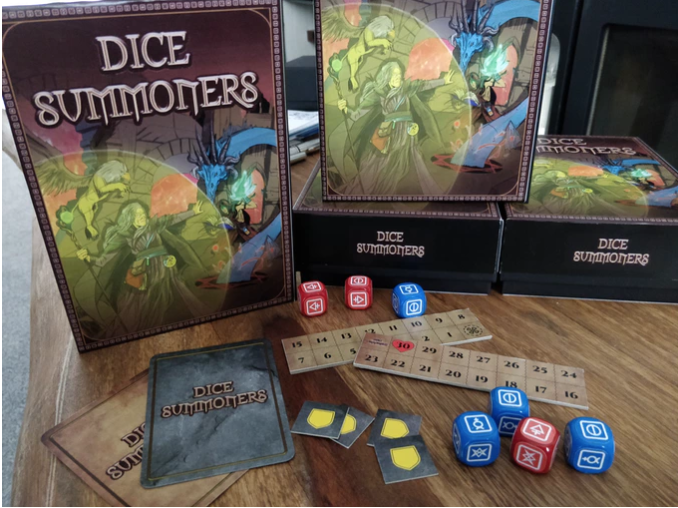 Editor’s Note: Continuing in our popular interviewette series for tabletop designers, we travel via blog post to Dublin to hear about Dice Summoners from the designer Eoin Costelloe. The game is now live on Kickstarter and nearly funded. But I promised no TL;DR so let’s get to it. We can get all we need to help you feel good about supporting Dice Summoners on Kickstarter with these 5 Quick Questions.

Attention is money, my friend. What is the elevator pitch for Dice Summoners?

Ever wondered what it would be like to pit a Triceratops against an angel warrior, or to fire a magic arrow at a charging zombie? Dice Summoners is a two player game that allows you to do just that. Roll dice, match them with cards, build your army and attack your opponent. It is a game that is quick to set up and quick to play, with high replayability and a mythological theme.

Making games is hard work, so you best have a great reason for making this thing. What inspired this game?

I’ve loved trading card games like Yu-Gi-Oh since I was kid. So when we thought of an idea to curb the randomness of a deck and replace it with dice, we couldn’t resist. We’ve played a lot of heavy strategy and heavy luck based games that we loved. We wanted to create a game that was a nice balance of both with some cool modern mechanics like a common pool of cards.

There are too many games out there. What hole in my game collection does this fill?

This game is fast and quick to play. We think there aren’t enough good two player games out there. This game is great for two people waiting for that friend who is always late for a game night. It has 44 interchangeable decks that make for hundreds of different versions you can play. It’s a painstakingly balanced game, meaning there are many different strategies that players can win with.

This is Boardgame Babylon, so out with your dirty secrets. What DON’T you want to tell me about this game?

We nearly killed each other trying to make a 4 player version of this game because we just couldn’t get the balance right. We aren’t ruling out a 4 player down the line because we have some good ideas for it but we have some couples counseling to get through before we can start working on that version again.

Thanks for telling us a bit about Dice Summoners. Let’s wrap up with the key specifics (play time, number of players, and the link to the game) and also, since I think you can tell a lot about a person by understanding their sense of humor, what’s a good joke to close this interviewette?

Dice Summoners is a two player duel using cards and dice that plays in about 30 minutes for ages 14 and above. It’s aimed at players who want a light competitive card game with high replayability. The game has an engaging strategy using dice based action selection and an extensive variety of cards. Immerse yourself in it’s mythological theme as players deplete their enemy’s health to win the battle.

Our Kickstarter is now live so check us out and consider backing us.https://www.kickstarter.com/projects/870869293/dice-summoners
And if board game development doesn’t work out, I think I’ll become an optician. People will say it’s a bad idea but they’ll see. They’ll all see.

Just love these 5 Quick Questions things? There are more here.