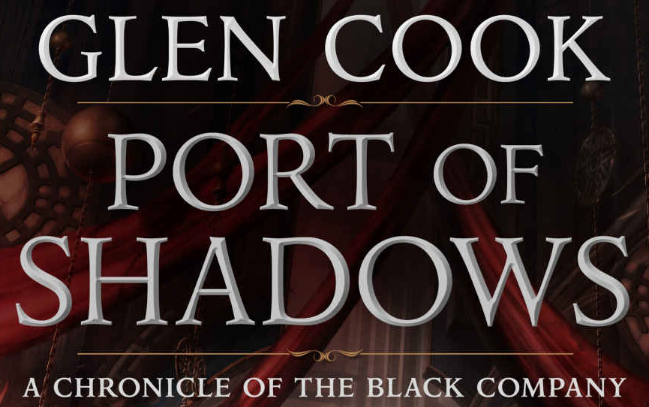 Port of Shadows by Glen Cook

(mostly spoiler-free)
Port of Shadows is the newest in the Black Company series, my favorite fantasy series when I was a young lad. As much as I respected and enjoyed Tolkien, revered Eddings, was dazzled by Zelazny, was charmed by the Dragonlance books, and enthused about Moorcock, Cook was the guy who wrote the book that inspired my own creation of a D&D world. Looking at Orphel, the fantasy world I created for RPGs back in high school, is heavily influenced by the gritty Black Company novels. While none of them live up the original book, many in the series get close and Cook’s characters are real people like you see in Game of Thrones, not perfect fantasy-book archetypes. I found this far more interesting than regular ‘quest-fantasy’.

I excitedly read through Port of Shadows new Black Company book since it’s the first one in ages. Cook is the same guy he was before, lots of excellent plotting (if they are sometimes more complex than they need to be), names that are sometimes awesome and sometimes ludicrous (and he goes full Russian Novel here with people going by three names), and the often lazy writing (the anachronistic phrases members of the Black Company slide into and the tendency to leave all the voices sounding the same. This was always a bit of a problem but it’s maybe worse here than ever before. A good editor could make Cook’s books all the more wonderful but he’s never found his own Maxwell Perkins.

I’d also caution readers who are sensitive about his treatment of women (others have commented on it and his racially-insensitive language in the past), but he’s fully writing about a society with a different attitude that is in line with historical views. My 2018 sensibility made me cringe at times, but I cringed at A Column of Fire earlier this year, too, which is a historical novel. I don’t think Follett or Cook advocate these views, they just write about them. Anyway, a word to the concerned.

While it’s nice to have series star narrator Croaker back after Murgen’s fussiness (who narrated a bunch of Black Company books more recently), the narrative takes some odd turns and there is more focus on an intriguing history than there needs to be (it’s good, but less of it would have been better). There’s also a truly bizarre epilogue that kind of gives Cook the option to kind of dismiss things he brought up that sounded kind of problematic for the lore. Insurance for inconsistencies that hardcore fans might find? Perhaps so.

All in all, a fun read and I hope the next book is also earlier in the timeline like this one. The grittiness of the series (which I re-read this year in anticipation of Port of Shadows) reminds me of the strong influence he was on GRRM’s Game of Thrones. Even a lot of his language goes directly into phrases used in GOT, although Martin does a finer job of turning that language into a real vernacular where Cook just spits out tough-guy talk. This is also one of the longer Black Company books and I’m inclined to think that Cook is best when he is briefer.

If you love the Black Company (as I do, warts-and-all), you will enjoy Port of Shadows for sure – which is why this decidedly three-star review has a fourth one up there. Pure nostalgia, folks – uncut and effective.

Buy it here! Amazon has a great price for it.

View all my Goodread reviews and become my reading friend