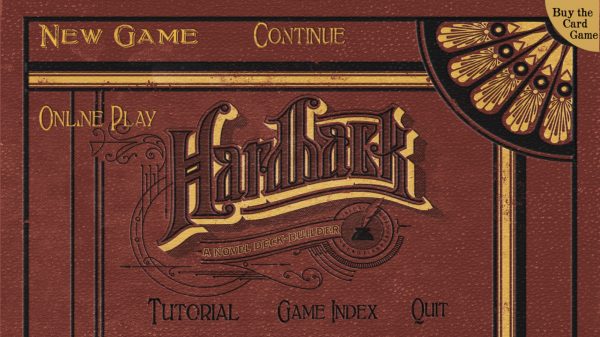 Hardback is the delightful sequel to Paperback, the deckbuilding word game from always-interesting designer Tim Fowers. This is a sequel worth having

As a second-generation bibliophile, I do love games with a book theme. I had the pleasure of playtesting Tim Fowers’ delightful Paperback (which originally had a longer title that might have gotten him in trouble with The Beatles’ record company) so I knew this excellent twist on the deckbuilder genre was going to be a hit.

While I like the physical game, in iOS form, Paperback is one of my most-played games. The game captures the wonderful feel of Scrabble with the clever mechanisms of deckbuilding optimization. This is a tight design that delights this wordsmith. I really enjoy coming up with the best word for the letters I’m dealt.

With that in mind, I was delighted to hear that Tim decided to return to the concepts of Paperback with a sequel. The game takes the deckbuilder concept and refines it to give the game a different, more open feel.

Hardback plays like Paperback on a basic level. You are building words with the cards you draw in deckbuilder-style (if you’re reading this blog, I’m going say, you get it.) Points are scored by playing letter formed into words that give you enough money to buy additional letters that may have special powers. While the letters are in rows (Ascension-style), you can also buy victory point cards that act as wild cards and big words get you a bonus card once in a while. Also appealing: your change can be used to ‘Buy Ink.’ This lets you flip cards without losing their benefit. No more leftover change with no value, which was a gripe with Paperback.

The difference is that Hardback lets you turn every card into a wild card if you would like to do so. This gives you a lot more opportunity to come up with the words you really want to create. But it’s not a free-for-all or something. Turning the individual cards into wilds actually sacrifices the benefits of the card, which may be gaining cash to buy more cards or it might be awarding victory points. 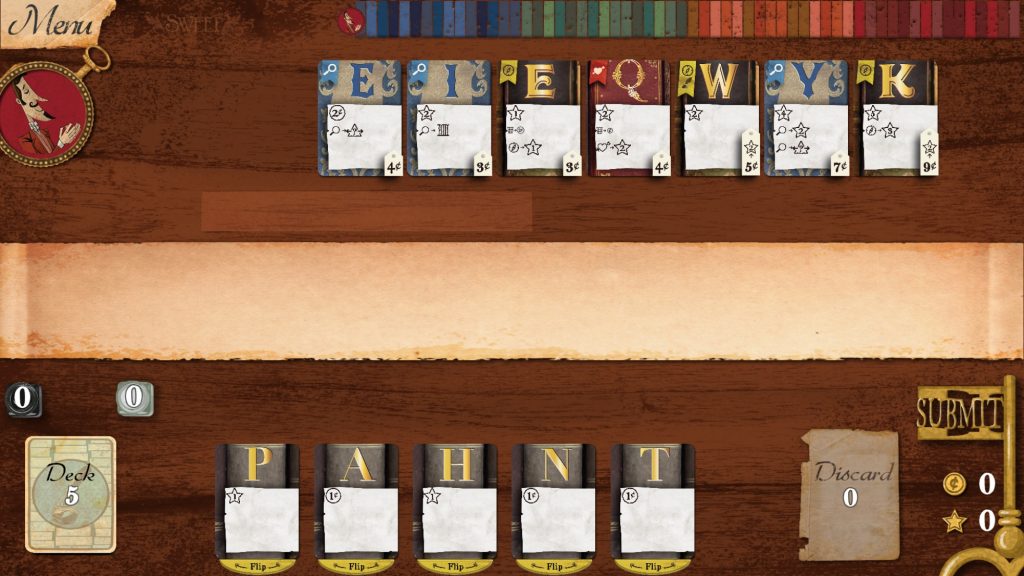 Hardback also includes Genre cards, much like the faction cards in Clank!, are cards that interact with each other when you have more of them. Thus, having more Horror or Mystery cards in your word will get you some bonuses, as stated on the cards. So, instead of a restriction based on only the letters you have, your choices are about what you sacrifice to get the right combination of letters and benefits. As much as I love Paperback, this is a really interesting implementation of the original concept.

Hardback played solo has the same addictive quality of Paperback. As much as I can enjoy the game in person with other players, like Dominion, it’s really competitive solitaire. Thus, they both work better (for me) as solitaire experiences. The gameplay is compelling and it’s one of those peanut games (i.e., you can’t play just once).

If I have a complaint about Hardback, it’s that the digital version is rough on the eyes. While I admire the excellent artwork of Ryan Goldsberry, whose delightful visions have appeared in all of Tim Fowers’ games, Hardback feels like a slight misfire from the logo page onward. While his development of the snappy style of Paperback takes the feel backward in time, it has also gained an ornate look that makes it hard to read.

Capturing the mood of the different book genres with different fonts is a good idea. Yet, in practice, it makes the game look less appealing. Some of the genre fonts (the Romance font is probably the worst) are hard enough to see on my iPhone 7 Plus that I’ve bought a different letter just to avoid it. The flashy letters are even less appealing when contrasted with the tiny size of the iconography (including the Flip spot).

The cards aren’t the only problem. The game has so many fonts elsewhere that are hard on the eyes as well, including the Submit button that is on a kind of flag or something and the various stylized but oddly large card names elsewhere. Worse, the score marker is so subtle that I didn’t notice it at all my first game. When you do notice it, it’s hard to tell numbers – you can just basically say you are winning or losing. That’s fine for me, but players with a more pointed need for precise will suffer at the colorful and perhaps overly-stylized score tracker.

Hardback is a delightful offshoot of the original Paperback that absolutely deserves a spot on your shelf. As a solo game players on you mobile device, it’s a winning title that well suits my ask that games be playable in a 5-8 minute timeframe. This is about as long as I want to really hold the device while playing. Longer games are fun but I need to use the iPad for them.

Lovely but squinty art aside, Hardback is a winner. The game is definitely worth the money to add this compelling little word game to your digital collection. Here’s hoping that Softcover, eBook, or perhaps Limited Edition is the name of the inevitable third game in Fowers’ trilogy.

Hardback is available now for download to your iOS device.

Disclosure: A complimentary copy of the app was provided by the publisher for independent review.