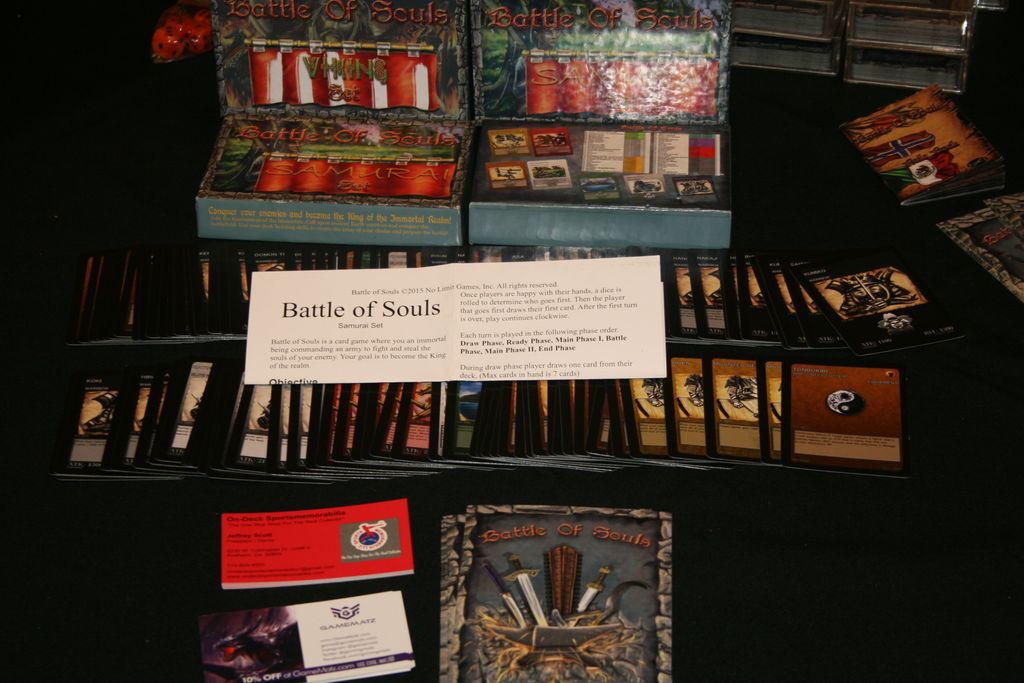 May 29th, Los Angeles, CA – Battle of Souls is an action-packed card battle game that combines what is great about the deck-building genre without being locked into starter decks or randomized booster packs. Why should collectors that can afford better cards dominate games? Battle of Souls equalizes the playing field and injects the purity of deck building strategy back into the game. Choose from a multitude of legendary historical warriors and pit them against one another in a battle of souls!

No Limit Games came up with the vision for Battle of Souls card game in 2015. The premise was to create the same feeling you gained from a standard “trading card game” but without the “pay to win” mechanism. Much like the game Othello, we wanted a play style that was challenging, easy to learn, has great replayability, and was fun without having to hunt down rare cards.

While we understand and appreciate that aspect of the trading card game market, we also felt there was an alternative approach that was lacking. Battle of Souls’ major selling point is that there are no starter decks, pre-constructed decks, or randomized booster packs. In some games, players that cannot afford to buy the expensive rare cards have a hard time playing against players with decks worth several hundred dollars. Battle of Souls’ concept is to remove the need to purchase overpriced single cards and hundreds of randomized booster packs with
hopes of getting the rare items they need in order to compete. Instead, with Battle of Souls, each set box that a player gets will contain all of the cards for that specific warrior group. Our game will be focused on the players’ deck building skills instead of how much money they put into the deck.

Playing the game is simple. Build your 40-60 card deck using no more then 4 copies of any single card and no more then 3 legendary warriors. Shuffle and start playing. In the game you have 7 types of cards: “Fighters” – Warrior, Elite Warrior, Warlord, & Legendary Warrior. “Support” – Tactics, Equipment, Battlefield.

From our initial idea to the game we have today has been a process of refining through playtesting and feedback at numerous in-stores and conventions. Our goal was to have the game be focused on the player’s deckbuilding skills as opposed to how much money they have to build the perfect deck. We think we have met that goal.

This game was also shown on the Boardgame Babylon YouTube Channel: