BGB at Gathering of Friends 2018 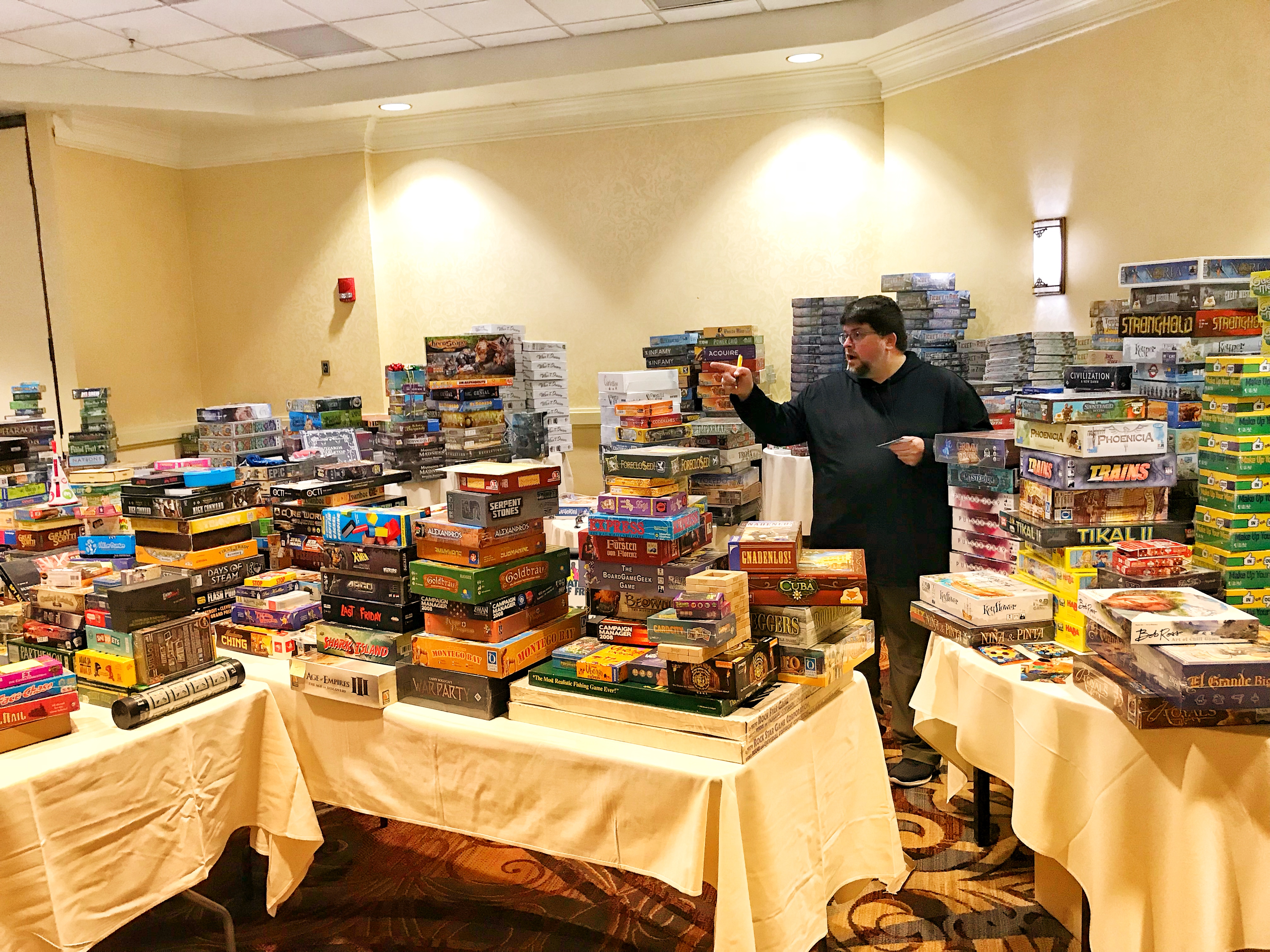 BGB at Gathering of Friends 2018

The Gathering of Friends remains a highlight of my gaming year. The trip to Niagara Falls (the US side) is worth it in order to get an early look at many games that the world will see later in the year at Spiel. As it happens, many games I really wanted to see last year were off the radar due to my intense last six months of life and work getting in the way of games. What can you do?

GOF for me this year was affected by a commitment to playtest a Legacy game that meant I would be playing a long series of the same game. I cannot comment on the game but I will say that it was certainly excellent and one people will be thrilled to see when it finally sees the light of day. I also happily had a chance to playtest both of my front-burner games: Theme Park and Cosplay Showdown (recently renamed).

What follows is a brief list of played games that I had a chance to try out (part 1):

Richard Breese’s excellent card game version of his hit game, Keyflower, is a prototype I sought out after recommendations from many other people at the Gathering. The various mechanisms that made Keyflower so popular are there, including the ability to use a building built by others, different worker types, and the farmland expansion theme. Many elements of the original are simply boiled down into cards instead of a map, Breese has made a lighter take on the game’s place-and-upgrade concept. While the theme doesn’t engage me particularly, I like the mechanisms and look forward to playing it more when it arrives later in the year. Richard said it is scheduled for a Spiel 2018 release. As you can see below, I was not alone in my appreciate for his latest game.

Keyflow is a new game by Richard Breese that combines elements of 7 Wonders with elements of Keyflower. This card drafting-tableau building game is fast paced and easy to teach, but provides much challenge. If you’re a fan of the Key series, DO NOT MISS THIS! #BOARDGAMES pic.twitter.com/4PvX6Y0JJQ

If there was a game of the convention, it was The Mind. This ridiculously 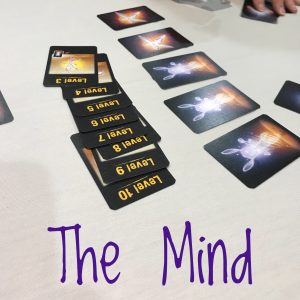 simple concept takes The Game and amps up the experience by providing players with a more open play style. You need to ‘read the mind’ of the other players to play your cards that go from 1-100 in ascending order during the game. Beginning with one card and scaling up from there depending on the number of players, you need to simply drop the cards in the right order into the pile in the middle of the table. There are no turns; you just decide if you’re the one with the next highest card to play.

The only thing is: Your only clues to determine whether you should play are the non-verbal cues of your fellow players. No words or real signs are to be passed, but you find ways. While I played the game with many people, I seemed to do best with Richard Breese and Rik Van Horn, although we lost on Level 6. Playing with my buddy Jeff was pretty solid as well, but you never know whose brainwaves might work best.

If you get into a bind, there are shuriken stars that can be used to force everyone to discard their lowest card. To ‘throw one,’ all players must raise their hands in unison, agreeing that they do not have confidence in their next play. This both gets you out of the bind and gives you a sense of the lay of the land with the remaining player hands.

If you fail to collectively play the cards in consecutive order, you lose a glowing ghost bunny card – which is somehow ‘a life.’ Yes, some of those sentences had odd moments, didn’t they? The theme of The Mind appears to involve incorporeal rabbit ninjas. I don’t understand it either but the game is a winner and it was in constant play at the Gathering. It’s due out from Pandasaurus Games soon and it will be a hot item. Pre-order now!

A new-to-me game that I wanted to play since this came out at Spiel in 2017, I 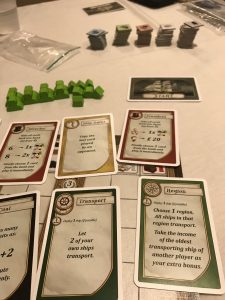 expected to like it because Concordia from designer Mac Gerdts is one of my favorite recent games. This one takes much of the feel of his previous game and changes the theme to be ships in the transition from the age of sail to the age of steam. There’s still this vaguely deck-building thing going on, but it’s suppressed even further by less frequent opportunities to add to your options. Instead, you buy ships based on their age, speed, cargo capacity, and tonnage.

These elements help you place the ships into service on certain ocean boards, which can only contain three ships at a time. When ships sail (some of the deck cards lets you do this), you get cash. When they are inevitably pushed out of the sea by newer, better ships, you score the ships based on your investment in that type of ship, with bonuses based on previously retired ships in that category. The various cards give you powers to optimize, break and manipulate rules as you acquire ships, sometimes providing a little money to opponents when you call for all ships in an ocean to sale, and plan for their eventual trip to the scrap heap after a few coal-driven voyages.

This may seem like a lot but it is maybe even lighter than Concordia in some ways. The concepts of the Prefect, Diplomat and the like are present in this buy, ship and invest game but I enjoyed how Gerdts reimplemented many of them into similar ideas to keep the feel of Concordia without just duplicating it. I liked Transatlantic quite a bit and expect to acquire it in the days ahead. 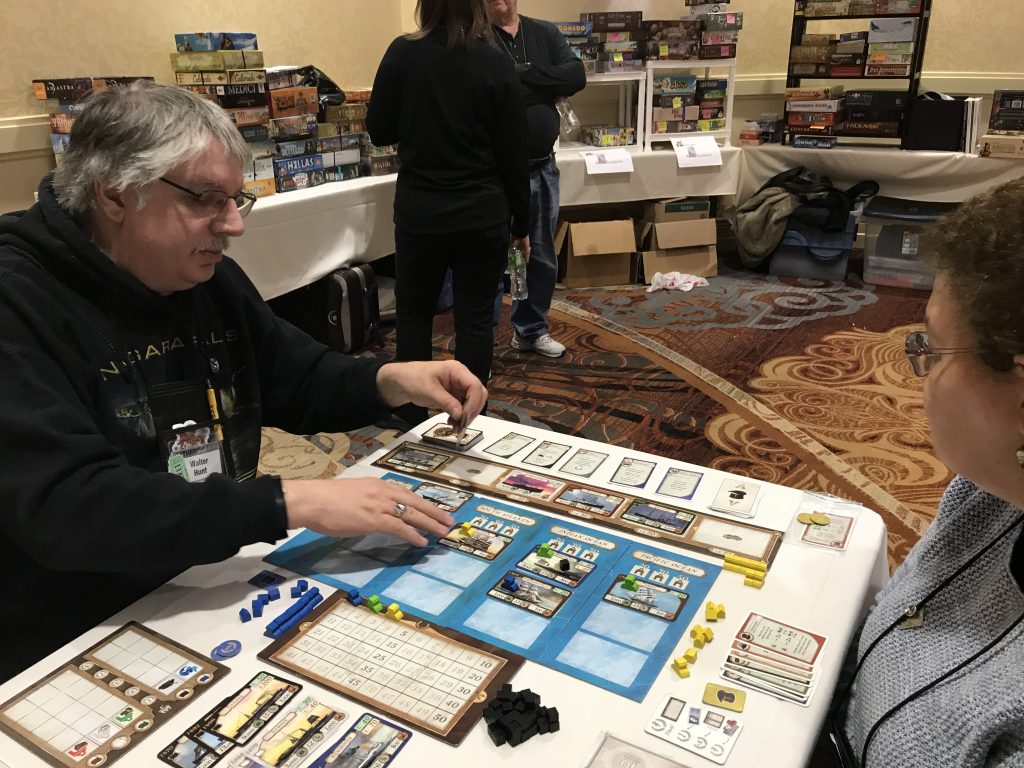 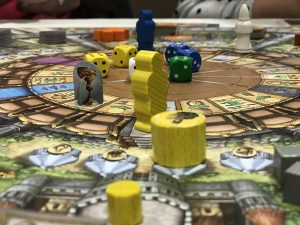 that shines in the components and some mechanisms. Players use a kind of rondel to acquire items and enact actions, using dice that command how far you can move. In addition to your ‘knight’ dice that only let your pawn move clockwise around the Round Table Rondel (which kind of reminds me of Burgen Land), you also get a Merlin die each turn that lets you move clockwise or counter so. But he’s a neutral pawn so timing your move is an issue if others are out to take their turn first. This works well and you play it over the course of six rounds, with attacks from brigands and such happening every other turn (like so many Feld ‘punishment’ mechanisms). Publisher Queen’s production quality helps, too, with flag, staff and shield tokens looking good. While there are many things going, this is Feld in approachable mode like Notre Dame. While not everyone likes Stefan Feld’s ‘point salads’ (as we call now derisively reference what we used to lovingly call ‘multiple paths to victory’), the ones that successfully blend the flavors win me over big time (Castles of Burgundy does, Luna does not). I’d called Merlin a solid entry into his ludography. I don’t need to buy it right away but I’d probably trade to get it and explore the system more. 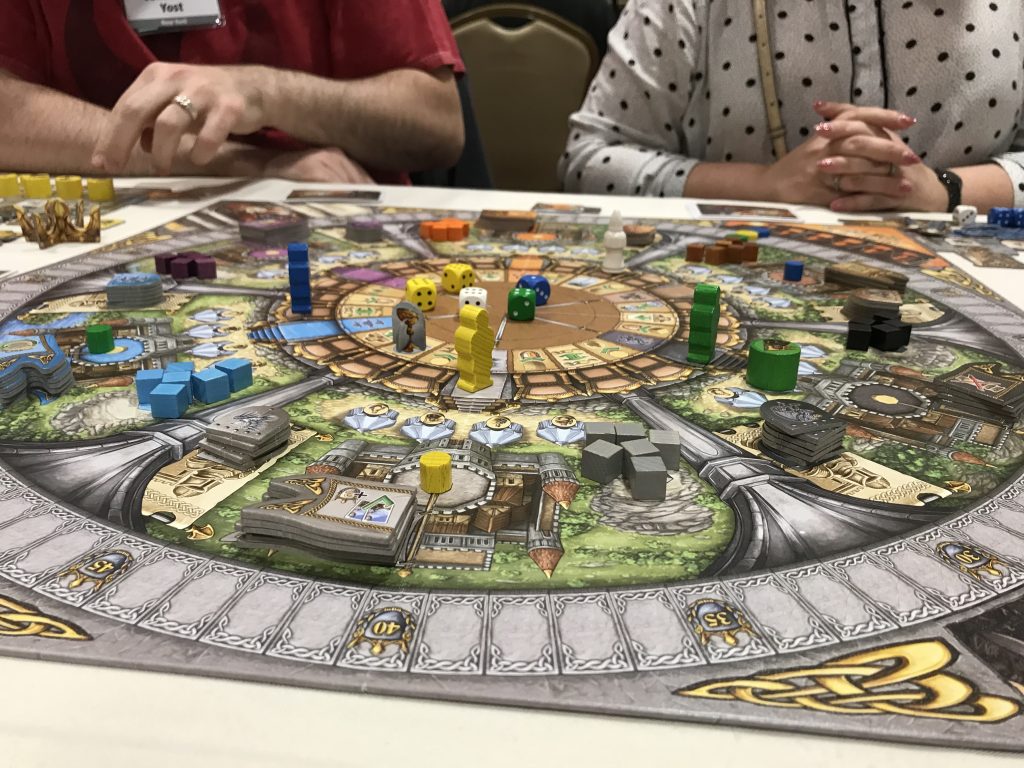 The SDJ nominee has staying power for our group and 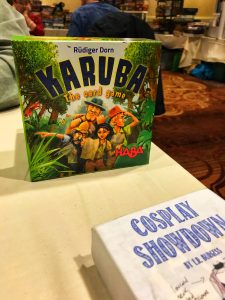 the clever, quick card game version may join it on my shelves if I can find it for a decent price. While Karuba plays in 30 minutes and feels like a real game, the card game can be knocked out in 15 minutes and it STILL feels pretty solid. You’re still trying to get your adventurers to their color-coded treasures with tiles that include paths through the jungle. Players ‘bid’ two tiles a turn, with the lowest total losing a tile each round. Then, you play the tiles to connect the explorers with their color-coded temple without running over each other but hopefully both using good paths that will help you pass gold and crystals along the way. It’s fast and will appeal to casual gamers just as the original did.

More to come later in the week…