PREVIEW: Edge of Darkness from John D. Clair and Alderac 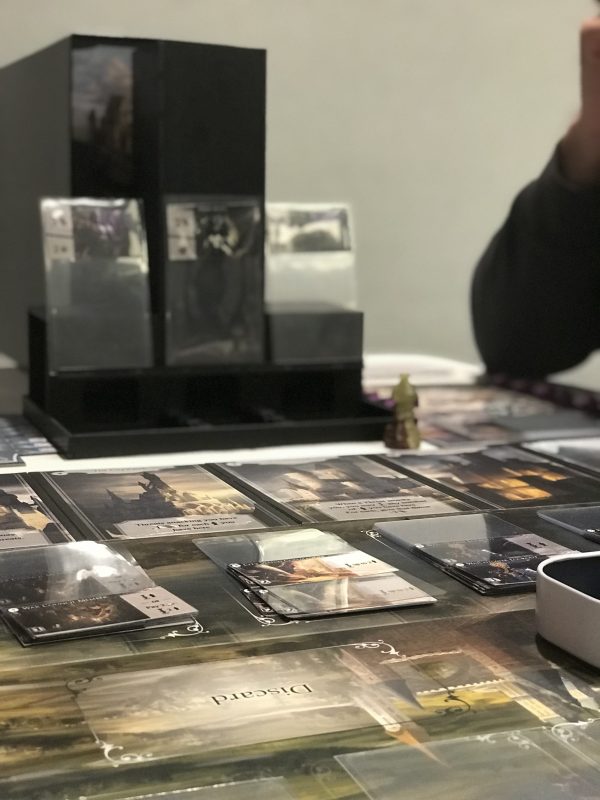 PREVIEW: Edge of Darkness from John D. Clair and Alderac

When playing Edge of Darkness, I immediately thought about the fact that I don’t play Dominion anymore. 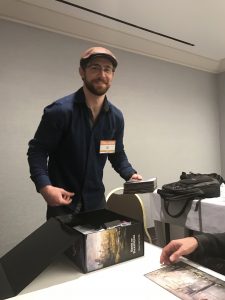 While the brilliance of the deck-building concept was thrilling when it came out, many of the games that followed it improved upon the original Donald X. Vaccarino design. The most compelling, in my view, are those that use it as a mechanism within a more significant game like Reiner Knizia’s Quest for El Dorado or, more magnificently, Concordia.

Edge of Darkness has done that for Card Crafting, the clever mechanism introduced by designer John D. Clair and Alderac Entertainment Group. Thankfully, it didn’t take a decade for them to follow the title that introduced this concept, the still-excellent Mystic Vale. But if that first game introduced us to Card Crafting in a simpler format of deck-building to VP glory, Edge of Darkness explores fascinating new applications of the mechanism in a satisfying game that has significant depths to explore.

Edge of Darkness, in fact, brings many much-loved mechanisms into its story of perhaps morally ambiguous Guild Masters seeking glory by defending their city. There’s worker placement, drafting, hand-management, semi-collaborative deck-building, and even a fricking awesome cube tower reminiscent of Wallenstein. It’s a complex and interesting game with a ton of variation, likely to provide long hours of enjoyable play. I’m excited for it to launch to Kickstarter this week after playing it at Strategicon‘s Orccon 2018 this weekend.

In Edge of Darkness, each player is a Guild Master trying to be the greatest leader in town through control of a central deck of cards, training their staff, and defending the city against incursions by evil folks. For some reason, this city was built right near a means of big baddies coming in. Did they learn nothing from Tolkien? Thriving cities in earshot of Black Towers are a bad thing. In real estate, it’s ‘location, location, location’. Yet, these folks built their city in a spot wherein some game designer could come by and tell the tale of their plight in a game called Edge of Darkness. What a bunch of chuckleheads.

But I digress. These Guild Masters want to defend the city but mostly they want to win. While there are various ways to do that, sometimes the bad guys come through, they hit everyone and sometimes they hit just one guild. So, you need to be ready.

As played, your Guild Masters draft cards from the board, upgrade one of them, and then play them out to take actions. Some of these actions require you to send an agent to the location to provide an advantage or take an action that might be immediate or setting things up for a future activity or event.

Edging Into The Game

The drafting is straightforward. Select the first card in line or play Influence markers (one of the game’s currencies) to skip it and take the next one. Interestingly, when those Influence markers are claimed by a player in the future, they aren’t just reusable. They flip over and transform into Good Will, a third currency which is really just a 1/4 victory point. I rather like this concept because it doesn’t have the utility of money normally used in this kind of mechanism, but it also isn’t entirely stripped of value. In many cases, players will skip cards that are highly desirable to their competitors so this prevents Influence from overly-sweetening the selection for the card. It’s a very nice touch. 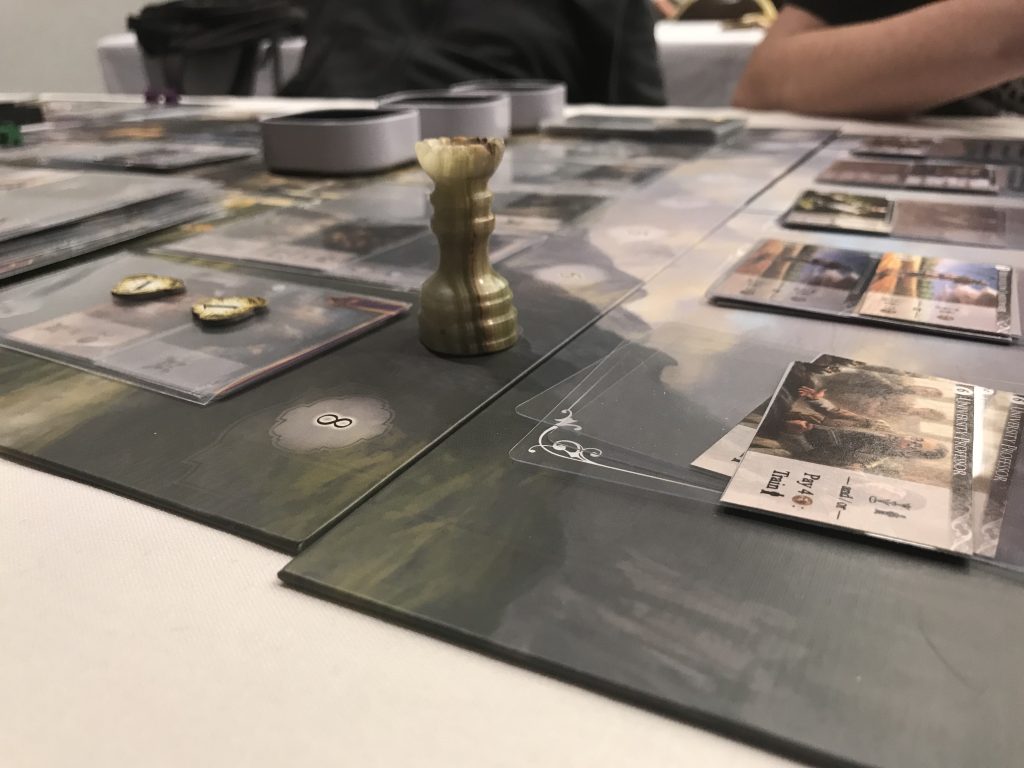 The opportunity to upgrade is another point where Edge of Darkness shines. While my one game (thus, this is a preview and not a ‘review’) was played with a standard set of ten upgrades, Clair has five times that number ready in case Edge of Darkness takes off like it should and it hits all the stretch goals. In the game, these upgrades are done without cost but only one is generally taken and it has to go on one of the cards in your hand into an open slot.

If you aren’t familiar with Card Crafting, quickly: You acquire cards that you slide into sleeves so their attributes are added to a card already in the deck. It’s a development of Keith Baker’s Gloom mechanism where transparent overlays affect cards, but it’s elegantly done with a three-slot concept Clair created. Cards begin with one or no slots open and develop over time as you upgrade them. You can also find this mechanism in the second game Card Crafting game, Custom Heroes, which is a bit like Tichu with cards you can upgrade.

Edge of Darkness amps this up further because the upgrades are double-sided. More on that later.

Drafted cards have ownership as well. While each player has a certain number they own, there are also generic cards they can acquire in the game. When playing them, your own and generic cards are free to use. If you draft another player’s card, you’ll need to pay one gold each to use the (up-to-three) actions on the cards. 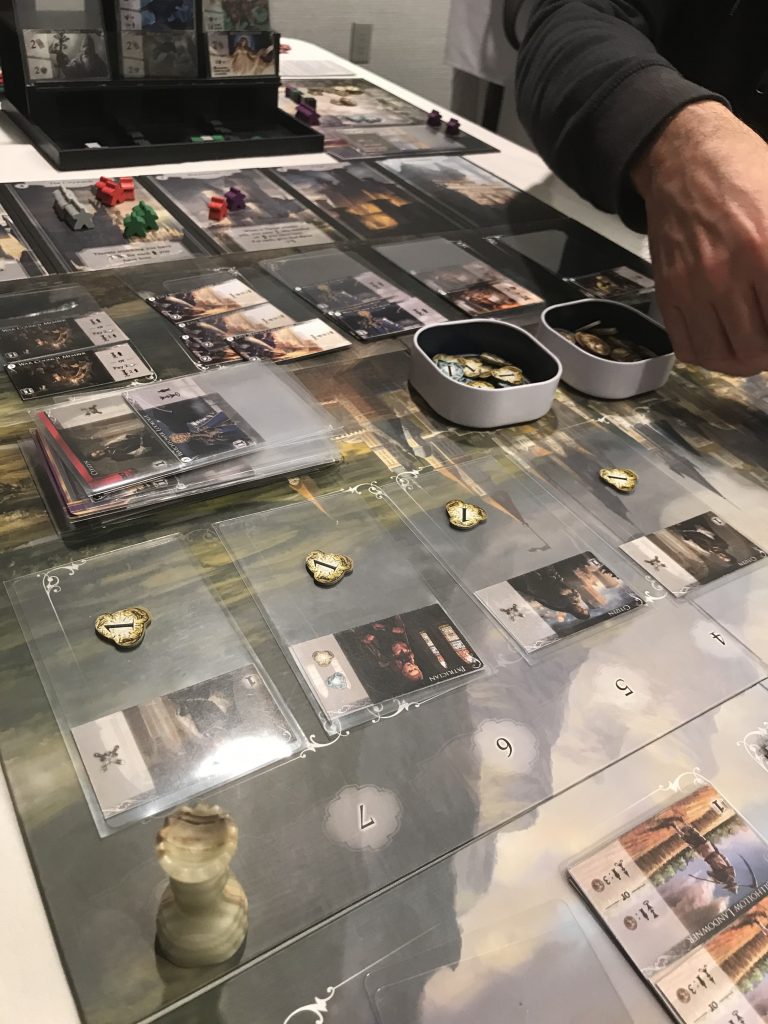 This concept makes for another intriguing part of the design. Ownership gets you more income (which normally requires actions), which offers versatility and 1/4 victory points at the end of the game if you don’t spend it all or convert them more efficiently with one of the actions.

After upgrades, you play your cards and potentially use the actions on them. These often require agents to be played to the location associated with the action type, worker-placement style. Some are simple enough to just let you take money or Influence, make your guild agents usable (some begin the game untrained), or to take arms against the bad guys. Others are more subtle, helping you acquire ownership of generic cards in the central deck or trading gold for VP, or even increasing your hand size. Managing the preparations for war isn’t all there is but it’s a key component so let’s talk about the bad people coming out of the mighty Threat Tower.

Next to your board when you play Edge of Darkness is the great Threat Tower. Evoking Tolkien’s Barad-dûr, the Dark Tower of the 80’s board game and also the Cube Tower used in Wallenstein, Amerigo, and other games, this edifice holds three bad cards at once and has an opening up top where players drop cubes of various player colors. Players acquire new cubes to drop in each round based on the cards in their three-card hand. When eight cubes drop into the area for one of the three cards, that baddie attacks the player who has the most cubes in there. Notably, there are also a fair number black cubes in the bag from which players draw them. If black has the majority (ties count), then all players are attacked.

The bad guys, interestingly, are cards from the deck. The back of the transparent upgrade and action cards are attacking hoards of evil. This clever idea helps increase difficulty as you build up powerful up the cards in the shared deck.

If you take the attack, you lose points on a personal track on your guild board. Attacks can be mitigated by some spaces where you have agents and defending successfully awards points. Some actions let you kill these guys as the cubes built up, as well. Hunting the threats can let you use the normally worthless Citizen actions (one that is common on the starting cards) to go kill a threat that might have too many of your cubes in it. Efficiently done, you can prep and hit them in the same turn but the subtleties of how this and some similar concepts work is another one of the strengths of the game’s design.

Played over eight turns, Edge of Darkness clocks in about two hours but it didn’t feel that long. While the game plays 2 to 4 players, I would expect a head-to-head game to last less time and be less compelling than playing with three or four. The components with which we played were not final except for the art. The work, done by Alayna Lemmer-Danner, is uniformly excellent and powerfully ties to the theme. 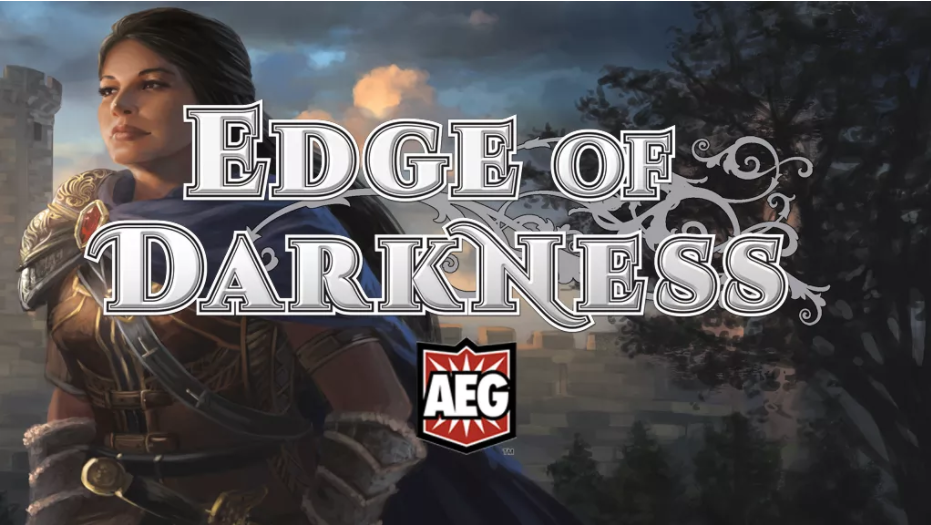 While new players might be slightly overwhelmed by the number of cards, those that are used to Dominion and other deck-builders should take easily to the various mechanisms available. In our game, the most lost player had it down by turn three and was raring to play again after we played it. I narrowly lost EoD but I know what I’d do differently next time I play and I’m looking forward to it. That is a very good sign indeed.

Official Boardgame Babylon rating pending for more plays but will likely be on the top end. Edge of Darkness launches on Kickstarter February 20th.

Disclosure: Designer John D. Clair personally taught our game and images are of a play-test copy of the game.