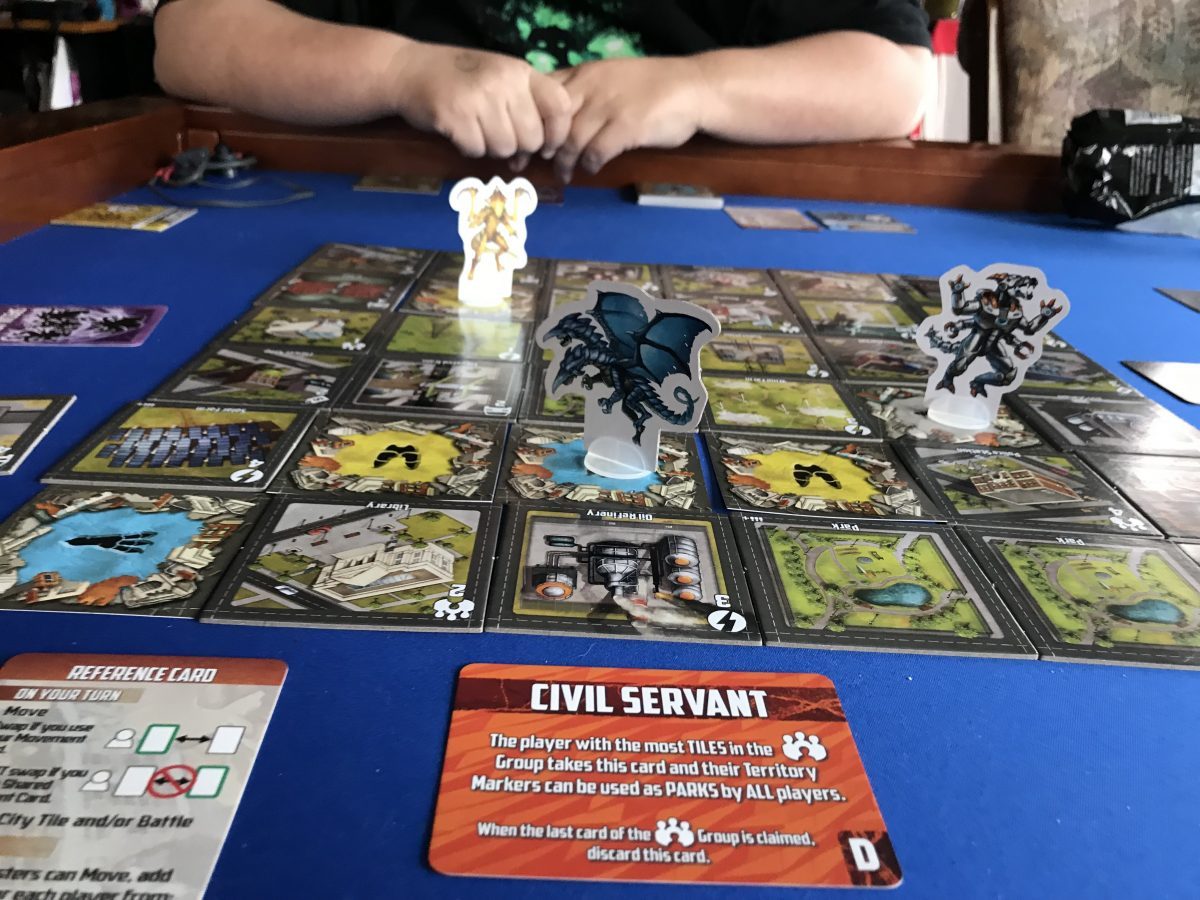 Kaiju Crush is all about monster battles in an urban area. The richness of the monster smashing cities theme is probably not in dispute. While I cannot count myself as a fan of films about the subject, I played plenty of Rampage (the video game) and see the appeal of these massive, fantastic creatures wreaking havoc on cities and the like. There is even a film coming out that looks loosely based on the video game. Certainly Pacific Rim (for all its flaws) reminded us of the appeal of giant monsters breaking up cities (if Cloverfield didn’t already do that for you).

A few years back, Rampage (later retitled “Terror in Meeple City”) from the always-interesting Antoine Bauza, would become one of the best matches of theme and mechanisms for this kind of game. A dexterity-based game that still had many euro stylings to keep it strongly constructed, Rampage is a treat. It’s just about ideal for the theme, but Kaiju Crush has helped me see another style that could work with this theme. This game comes to us from the successful husband-wife team that runs Fireside Games, makers of the hit Castle Panic series, the excellent Hotshots (which we love) and the amusing Bears!, working with designer Tim Armstrong.

Kaiju Crush tells us the story of a group of large, unruly monsters controlled by the players that decimate a city. Players are trying to cause more destruction than the others to win the honor of being the best monster (winning the game). Turns are focused on a creative action system that allows players to use one of two moves each turn, either the one they are dealt (currently hold) or a community option that sits between players. If players use their own, players switch it with the community 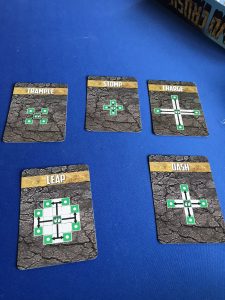 option but if they use the community choice, it stays there. I quite like the way this mechanism works and although it sounds familiar, I cannot place it. This restricts movement in an interesting way, allowing for choices between adjacent moves, leaps over a spot or two, or a Chess Knight-style move.

Beyond that, Kaiju Crush is about using those moves to claim buildings on the board, which have various values between 1 and 4, as well as a set icon that can add up to bonuses later. This move for your monster lets you take a space over (claiming the tile) and repositions you for next turn. In this way, the game has the feel of a more nuanced Hey, That’s My Fish, with players claiming buildings both for points and for how it positions them to claim additional spaces with the options available next turn. As the game progresses, fewer and fewer options are available as the map of buildings is turned to rubble and claimed spaces. This positioning is important because players still only have those two options for your monster has each turn. The end game is maximizing how you can claim as many spaces as possible before the city is decimated. Players collect points for buildings, sets claimed, and any other bonuses. The winning monster is the one with the most points, naturally.

That’s not all there is, though – the monsters get to fight if they land on the same space or an adjacent one. This kicks in the battle process, which is like a paper-rock-scissors game you play to 3 out of 5. Each player gets a handful of five cards per battle. Using the five-option system, each monster in the battle plays a card and resolves it by comparison. This is where the monsters’ special powers kick in, as each one either wins ties of some type or gets to optimize cards a bit. This match of cards is fun, with 3 of 5 being the perfect amount to give people a chance for each battle to have its own life. That doesn’t mean I wasn’t routinely killed by my wife 3 in a row because she can zone in on my brainwaves. But you’ll have a great time with it, I’m sure. Winning the battle gives you a bonus chip (worth 1-3 points) and if you’re on the same spot, the winner will take it.

The game has a couple of additional elements that add to the experience. All players get a special one-time use power. They are hit-or-miss, but can help in a key moment. Additional, there are four other ways to score points based on the spaces on the map you collect, the building types you claim, and some options that even crop up in the game. These extra concepts add replay value and some variability to the game. 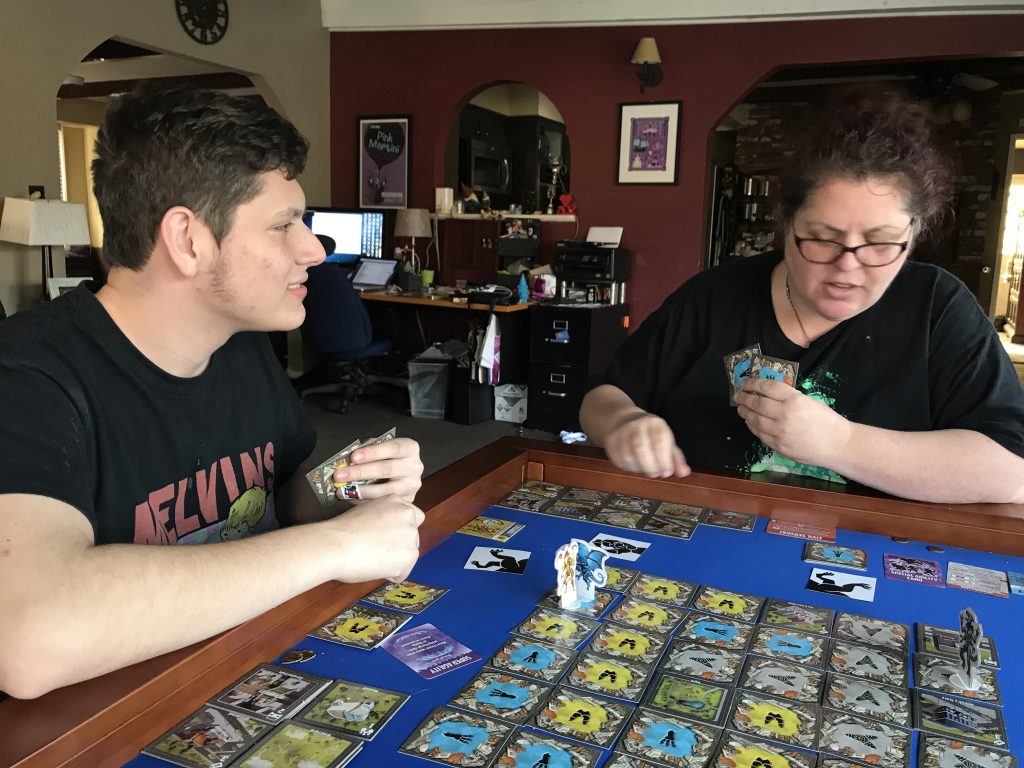 In the end, Kaiju Crush is a fun game for families, but I wouldn’t recommend playing with only two. The game is less interesting with just a head-to-head game, offering fewer options all around. I think the game shines best at four players, with a full complement of gamers. Components are solid, as is the norm with Fireside, although younger players might enjoy replacing the cardboard monsters with miniatures to up the toy factor. Gamers will admire the intriguing aspects, but might wear out the game play quickly with the options available. I still recommend giving it a play to see the interesting moving mechanism and to have a good time with the quick battles you get into with your kaiju. The game is certainly ripe for expansions featuring new monsters, moves and special powers, too.