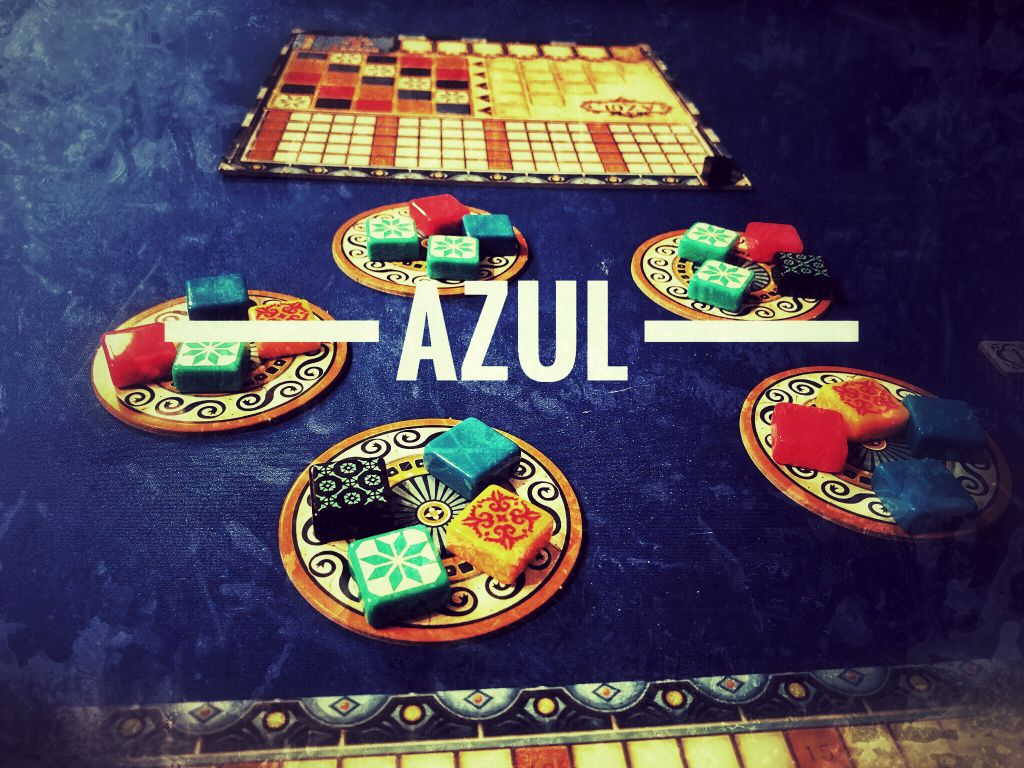 Azul, I will admit, is a game that I judged by its cover. Good thing it’s a wonderful game. The design drew me in immediately. I’ll admit to being a sucker for gorgeous package design and when the components are also premium wonders, you’re already halfway to my approval, folks. Now, I don’t mean Boris Vallejo-esque sword-wielding ladies. I mean design like what you see in Oink Games, all of which have conscious elements that add directly to the mood of the game experience. Quality work isn’t the only way this is achieved; way back in the pre-euro days, we had Cheapass Games here in the US and their powerfully simple black and white envelopes appealed to me for both keeping costs lower and letting head Cheapsser James Ernest save time in coming up with overly expensive colored boxes, he put it into the game design and those hilarious rules.

So, with that longer-than-planned caveat, let’s talk about the game. Azul is a game at once familiar and exciting in its unique feel. The game is a design by Michael Kiesling, a two-time SDJ winner and frequent collaborator with the mighty Wolfgang Kramer, but this one is all his own. Based on Azul, I definitely look forward to his next solo game design.

In Azul, players get a board on which they will place the gorgeous, chunky tiles that are a hallmark of the game’s production. They will place them according to a set of clean, elegant rules that are straight out of 90’s Schacht and Knizia. When you select tiles from the one of the selection discs, you take all of one color, pushing the remaining tiles on that disc to the center market. Once this has happened during a round, another option becomes available; now, players can also take all of one color from the center of the table. While the discs are dealt only four pieces from the (lovely) bag, once the excess tiles start piling up in the middle, players are likely to get more of them.

When you claim tiles, you need to place them on your board. This is done by selecting a row for completion, with the first row scoring with just a single tile and each row below it taking one more until you reach five at the bottom of the board. Thus, each turn, players will want a different number of tiles for each row. While the prep area of a row has a certain color tile in it, no other colors can go into that row.

This means players sometimes obtain excess tiles that need to be stored at the bottom of the board. These each inflict a penalty that rises with each additional tile. Also, the first player to fish tiles out of the center of instead of just off one of the distribution discs gets to select first in the next round, with the unhappy addition of a -1 tile that gets to drop into the first slot in the little holding pen for overflow tiles (which some gamers are apparently throwing away? It should have been a proper tile anyway). I find this mechanism quite appealing – that tradeoff of the loss of a point for the first shot and the first pick next turn. That says this game has been tuned.

Sound intriguing? Maybe not. The theme of Azul isn’t really there; it’s just a game of placing tiles into the right sequences to score points and marveling at how pretty they are. But that’s not it – this is a wonderfully elegant design that we so rarely see today. Azul goes down like 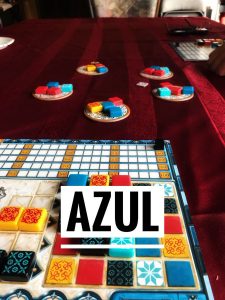 freshly-made lemonade – it feels like it’s made of the real thing and not just rehashed mechanisms from other designers’ work. Kiesling has taken a solid selection mechanism and added interesting scoring. It’s such a clean, empirical design and Plan B’s excellent production complements it beautifully.

With the advent of Kickstarter and the crazy influx of underdeveloped and messy games into the marketplace, it is kind of glorious to see a lovely design like Azul come out, especially since we see fewer titles from the twin masters of this feel: Reiner Knizia and Michael Schacht. Kiesling is no slouch here, although most of his ludography was constructed with Kramer, a bigger name. But let’s not Garfunkel him entirely – Vikings was also a winner. With Azul, Kiesling could be on track for a solo SDJ. I’d call it a contender for one of the coveted slots later this year.

Even so, with the fast-food nature of game designs these days, I think players should give it a go first. While serious eurogamers will appreciate Azul’s charms, those who are seeking a thematic experience may balk at the simple beauty and sparse rules. That’s my only caution in reducing the rating to a Play It Now. I love it, but modern gamers may need to develop a palette for it.