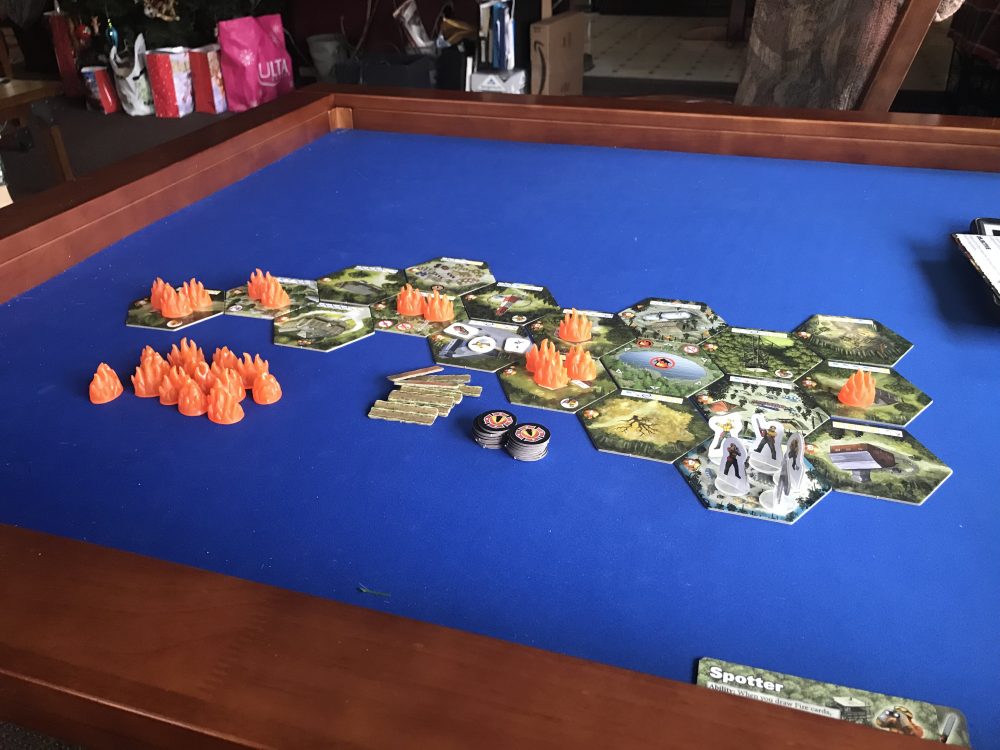 If Matt Leacock, designer of Pandemic, is the modern king of cooperative games, perhaps Justin De Witt is the Prince. Justin created the extraordinarily popular and really very fun Castle Panic.  Like Pandemic, Castle Panic has now seen a number of different forms, including Dead Panic, Star Trek Panic and, inevitably, Munchkin Panic. But he hasn’t stopped there. His new game, Hotshots, is another attempt to create an enjoyable cooperative game experience with mechanisms not normally seen in games of that type.

Hotshots, which we asked about once before, is a game about fighting fires in the forest with a press-your-luck dice rolling mechanism at its core. 2 to 4 players take on the roles of firefighters (each a special role like the Swamper or Spotter) on the front line of a blaze in a wooded area. The board is a modular set of hexes that can be set up a variety of ways. The tiles have various functions, including an association with the powers of the players or housing additional equipment the team can use to combat the fire. 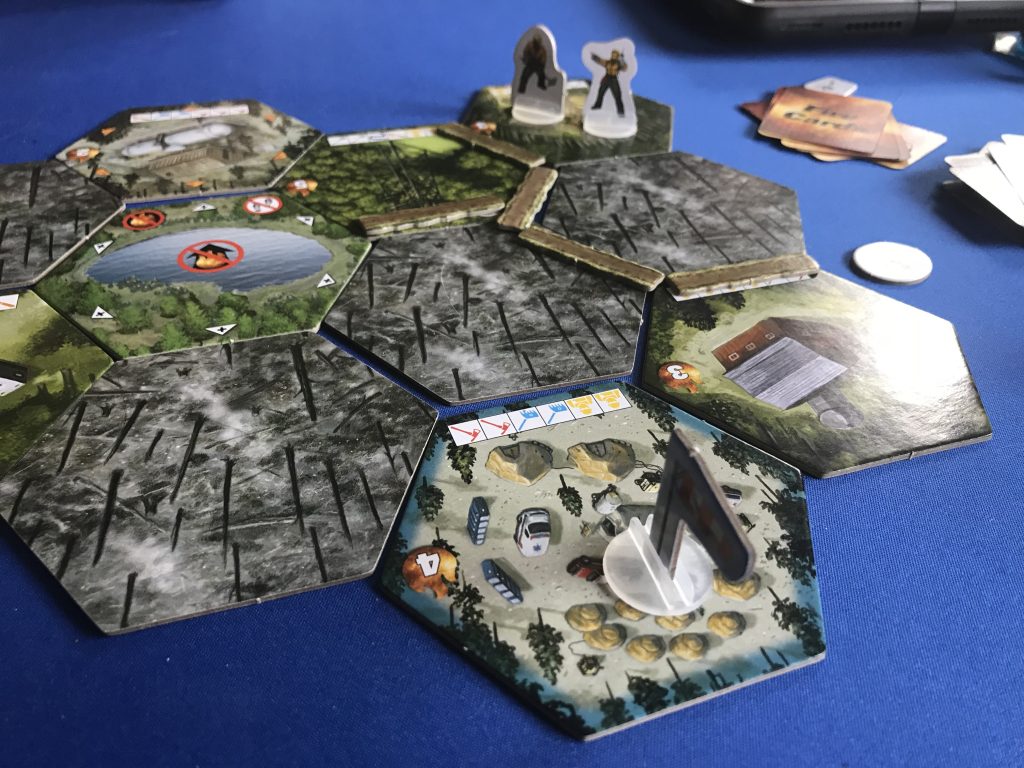 On your turn, you move your firefighter one or two spaces and attempt to put out a fire. Each of the spaces has a unique element as well as a set of six die faces that you must roll to combat the fire there. Each face of the six sided dice has a different firefighting symbol on it, from the regular fireman to a hose to a Pulaski, which is the name of that ax thing you always see firefighters carrying. No, I didn’t know it was called the Pulaski either, but I did learn that from reading the rules of Hotshots (same thing, the MacLeod). I love it when I learn something new from a game. Anyway, if you roll and get three matches, you can place a firebreak on a side of the hex, four will knock out a fire, five will knock down two and all six will put out three fires. This last accomplishment means a big bonus, including a special chit with a rule-breaking power and placing a firebreak as well.

A key element here though is to stay close to your comrades, because they will give you an extra chance in case you blow it. What does blowing it mean? This is a press-your-luck game so players need to decide after each roll if they are going to continue or stop and apply what they have rolled to the fire. Every time you roll the dice, you need to lock a die that matches one of the remaining symbols. If you roll and fail to find a match, you lose out and the fire gets stronger. If you have another firefighter with you, failing once is okay. Your partner allows you a second shot and gives you a better chance to get all six dice to match. 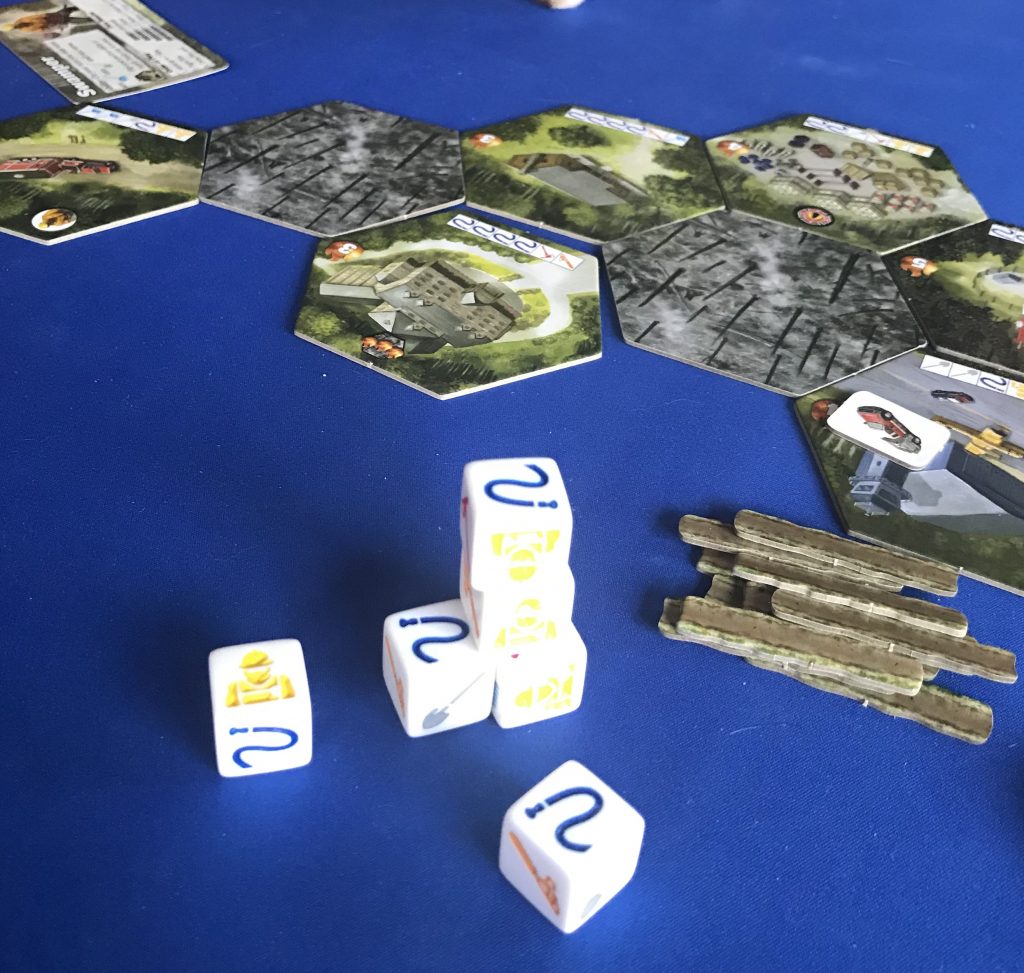 Other map elements help, like the station where a one-use helicopter can knock down a big fire and trucks and planes can help knock our blazes and create firebreaks. Others are tied to player abilities, which are lost if the space is wiped out.

The firebreaks are key because, like all cooperative games, the game gets its say. After your turn, you draw a fire card to see how the blaze spreads. In a clever mechanism, a wind sock tracks the direction of the gusts and certain cards will push the fire out into adjacent hexes based on it. Firebreaks help protect against the fire spreading by wind.

Board hexes are lost when they reach their burst number, which is the amount of fire it can contain without going up in flames. This value ranges from 2 to 5, and this plays into the Fire cards. This can be specific hexes, increases based on the current burst point of certain spaces, or simply the way the wind is blowing. The fire can rage out of control and players lose if they allow eight hexes to be burnt out. Alternatively, you win if you can knock down all the fires throughout the game board.

Let’s talk about the fire pieces. The components in Hotshots are nice but the clear highlight is the fire pieces them self. They look like little plastic flames and they’re distributed on the board early on and represent fire that is burning at the game’s beginning. They kind of outshine the cardboard standees for the firefighters (bling alert) and other pieces. Pleasantly, the box is appropriately sized for the components and easier to pack for travel.

Importantly, everyone I have played this game with has had a lot of fun. While the subject was a little grim as we watched the recent fires in Southern California, we did enjoy the act of putting out the fires together. While the beginning game has a standard setup, you can also use the guidelines in the book to simulate famous parks. This allows the terrain to abstract out things and makes for enjoyable replay value. Our second game was in the Grand Canyon and one of the largest blazes was remote and through a craggy terrain hex that made it hard to reach. That endeavor colored our whole game, which made for a different experience and a hard-fought win. Hotshots is the kind of game where you get high-fives and a story tell after a big win. That’s satisfying.

The game also includes variants to make the game somewhat easier to beat for younger players who want to win more often. I note this because the game can be hard! But it wouldn’t be much fun if there wasn’t a struggle. We’ve won most of our games with six or seven burnt hexes, and lost a couple as well. More importantly, we have wanted to play it again and again because of the quick game play and satisfying experience of Hotshots.

In our view, Fireside Games has another winner on their hands that plays well with younger players and yet it’s interesting enough for gamers to play. Hotshots is also approachable for casual gamers who need an introduction to cooperative games. While there is no useful way to keep from having someone take over the game (no secret info), it’s a fine gateway title.

In case you missed it, Justin was on BGB’s podcast in the past when he and his cool also-a-game-designer wife Anne-Marie, visited us for Strategicon.