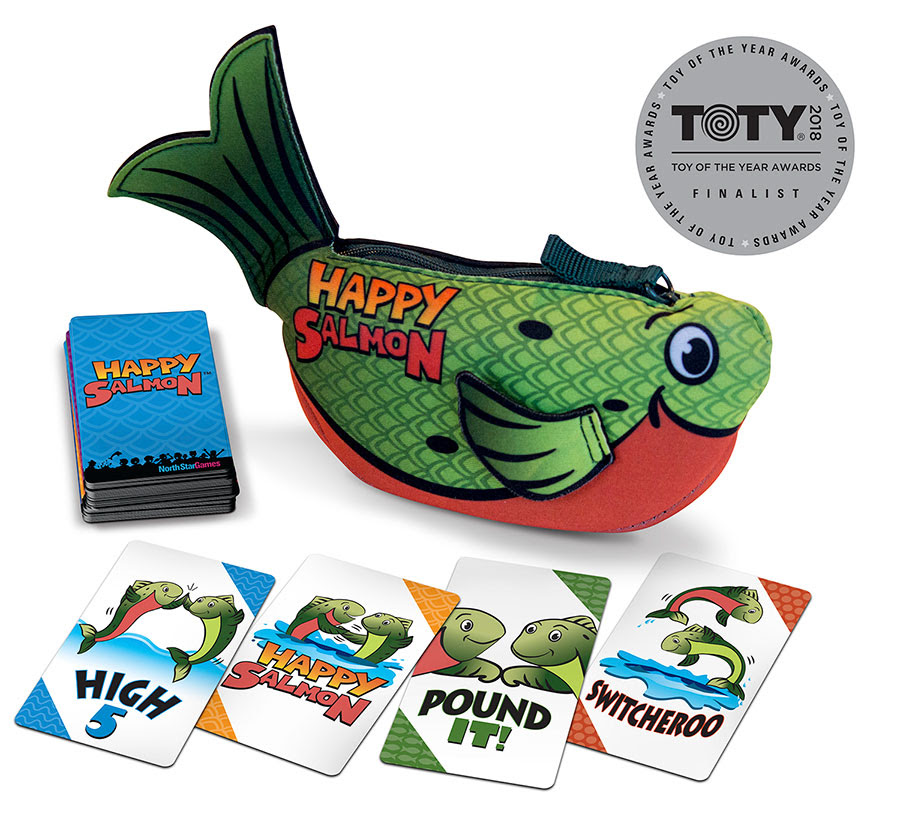 Kensington, MD (November 28, 2017) – North Star Games is thrilled to announce that its hit game, Happy Salmon®, is a finalist for “Game of the Year” for the 2018 Toy of the Year (TOTY) Awards given by The Toy Association.

Known as the “Oscars” of the toy industry, the TOTY Awards honor the “best of the best” in games and toys across 17 categories. This year’s finalists were selected from over 600 nominees by a committee of retail buyers, journalists, bloggers, academics, and inventors/designers, and are being voted on by both these industry experts and consumers.

“We are extremely excited and honored to be selected for our first ever TOTY Award,” states Dominic Crapuchettes, Founder and Co-President of North Star Games. “What makes Happy Salmon so unique is that in this age of electronic gadgetry, Happy Salmon gets the entire family off the couch and interacting with each other. With mini-celebrations built into the gameplay, you can’t help but have a good time as you run around, high-fiving, fist-bumping, and doing the hilarious Happy Salmon shake with everyone playing!”

TOTY Award voting is open until January 5, 2018. All the amazing finalists can be viewed and voted on at www.ToyAwards.org. The winners will be announced on February 16, 2018.

Happy Salmon is the simple, fast-paced card game that gets everyone moving and laughing in under two minutes. Players simultaneously call out the actions “High-5”, “Pound It”, “Switcheroo”, and “Happy Salmon”. When two players match, they celebrate by performing the action together and discarding their card. The first player to discard all of their cards wins! The Toy Insider calls Happy Salmon “one of the best games of the year, if not ever,” and it has been honored with the ASTRA Best Toys for Kids award, Parents’ Choice Fun Stuff Award, Mom’s Choice Award, The Oppenheim Toy Portfolio Gold Seal, Family Choice Award, Autism Live’s Parent’s Choice Top Toy Award for Tweens and Teens, and the 2017 Origins’ Best Family Game and Fan Favorite Awards.

North Star Games is the publisher of award-winning party, family, and strategy games. Wits & Wagers is the most award-winning party game in history, Evolution has received praise from the renowned science journal Nature, and Happy Salmon is quickly becoming a gaming phenomenon. For more information on these games and more, visit www.northstargames.com.