Editor’s Note: As a kind of content geek, I try new formats. So, here’s a new interviewette for tabletop designers. We promise no TL;DR. Let’s see how Jeff Morrow, publisher of The Battle for Greyport (a relatively new title from Slugfest Games) does, shall we?

BGB: Attention is money, my friend. What is the elevator pitch for the Battle for Greyport?

Jeff Morrow: Battle for Greyport is a cooperative deckbuilding game based on the characters and world of our popular Red Dragon Inn franchise. You and your adventuring companions are about to head to the tavern for a pint when you are rudely interrupted by monsters attacking the city! There’s no time to properly outfit the adventuring party – you need to gather an ad-hoc assortment of heroes and items as you go. Each round, everyone helps fight the current defending player’s monsters, so there’s lots of interactivity and almost no down time. The game continues until the players defeat the monsters and their boss, or until any player is defeated. 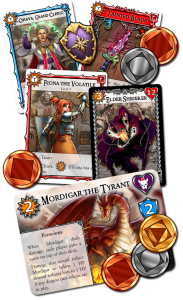 Jeff Morrow: My old friend Paul Peterson (of Smash-Up fame) told me that a friend of his, Nate Heiss, had a game that might be right up our alley. So Nate pitched us with a fantasy-themed deckbuilder called Guilds of the Realm. It had a lot of good ideas, but had generic “characters” in the form of the guilds – like the rogues’ guild, for example. So we took those characters and gave them new names – specifically, we turned them into our existing characters from The Red Dragon Inn!
BGB: There are too many games out there. What hole in my game collection does this fill?
Jeff Morrow: If you like challenging deckbuilders and coop games, then this game is for you. We agree that there are too many games out there, but interestingly, there are very few in the coop deckbuilder niche.
BGB: This is Boardgame Babylon, so out with your dirty secrets. What DON’T you want to tell me about this game?
Jeff Morrow: We’re sadistic and mean, so we would never want you to know that since we released the game we’ve updated the rules and errata-ed the introductory scenario.
BGB: Thanks for telling us a bit about The Battle for Greyport. Let’s wrap up with the key specifics (play time, number of players, and the link to the game) and also, since I think you can tell a lot about a person by understanding their sense of humor, what’s a good joke to close this interviewette?
2-5 players, takes about 20-30 minutes per player. You can find more information here.
JOKE TIME
Jeff Morrow: Two chemists walk into a bar. The first says, “I’ll have H2O.” The second says, “I’ll have H2O too.” The second one dies.

And – want to learn more? Watch: