SECTRE is a new abstract strategy game from the Freshwater Game Company, an organization with a credo to admire. Freshwater is committed to environmentally sustainable games sourced from local businesses and assembled by hand. This Minnesota company has the right idea and Boardgame Babylon certainly supports their effort to create games in this kind of format. After horror stories about mass-produced games with mildew in them, Kickstarter campaigns with copycat titles, and the environmental record of some of the companies producing gobs of plastic for our amusement, Freshwater’s mission is a worthwhile one. 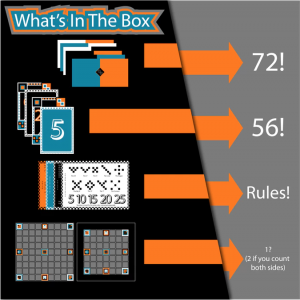 Their first game is here: SECTRE

So, great company and vision but how is SECTRE? The video on their Kickstarter page won’t tell you very much. What is clear is that it is a tile placement game with domino-like cards players use to form patterns and score points on a grid. Players are given a hand of these domino cards (in that they have two ends with different colors) and receive a solid distribution of variants from subtle markings on the cards (nice abstract art, by the way). These are the cards you get for the game; it ends when you have played them all. I can also tell you that the game plays with 2-6 players and is over in maybe 20-30 minutes, from our experience. We’ve played with 2, 4, and 5 players so far.

Each turn, players place one of their cards on the grid board, taking up two spaces and potentially claiming one of the scoring cards available to players. These score cards (which range from 5 to 15 points) are acquired by building certain patterns using the cards. While some are just about a certain number of spaces of a color being diagonally connected, others are specific patterns that players need to cleverly get on the board without the other players noticing and potentially grabbing the scoring card before them. These score cards are limited as well, so there is a bit of a race for who can score the cards first. Notably, a single play can lead to multiple cards being collected.

Of course, you can’t just place cards anywhere. They must be placed so that the color on each side of the card is not orthogonally adjacent to the same color. In this way, it helps build the patterns while also providing some restrictions to guide placement. Again, if you create a pattern that matches what is on offer, you can claim it. Also, after the first turn, a little stacking can take place. As long as you follow the other placement rules, your cards can cover other cards. Breaking a previous pattern doesn’t matter; once a card is claimed, it is owned by the player who scored it.

The game ends when all players have played their hand of cards. The player with the most points wins. 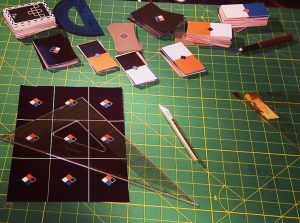 SECTRE does feel handmade, which is pleasant. The cards are cardboard and feel good in the hand, but I do wonder about durability of them after manyplays of SECTRE. I welcome the lack of plastic in the game, but it could affect the length of time enjoying the game (although we’re talking decades, not just years). While I was looking at a prototype copy, the principles of the game company suggest it will feel similar. Nice to know your fun isn’t doing terrible things to the environment.

SECTRE is lighter, but still an abstract strategy game. Casual players sometimes won’t take to this kind of game, but ours mostly did. Of course, they were challenged by this GIPF-loving gamer, who won every game. Some players were frustrated when I would claim multiple cards with a single play, so this might be house-ruled away as a handicap.

The game operates on ground that is widely covered in the abstract strategy world, with the use of domino-style pieces and a grid board. At times, I thought of patterns from Hanging Gardens, the old game M, and a few others that wanted to do something new with this combo. Serious gamers will probably prefer something like Tash-Kalar for a game of placement and patterns, or maybe Kris Burm‘s GIPF project for a little less detail than one gets with Vlaada Chvatil’s work.

Yet, SECTRE works as a very light, almost party-level game that plays closer to traditional abstract strategy games like checkers and chess than with modern gamer games. Not every casual gamer is as grumpy as the crowd I schooled. Played quickly, SECTRE is an enjoyable pastime that handles up to six people, and that might be a hole in your collection. How many times can you play Tsuro in one night?

SECTRE comes to Kickstarter on November 15 with attractive pricing, free shipping and no guilt over another game being added to your shelf (and carbon footprint). For more information ahead of the Kickstarter, check our Freshwater Game Company on Facebook.