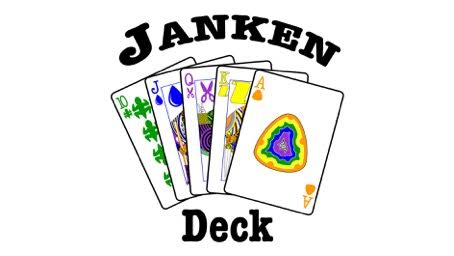 What would card games be like if the suits outranked each other like in Rock, Paper, Scissors? That was the question that led artist Jeffrey Daymont to create a new deck of playing cards, the Janken Deck. The deck uses five suits: Rock, Paper, Scissors, Water and Lizard. Each suit is “Stronger” than two other suits (Rock blunts Scissors and crushes Lizard) but is “Weaker” than the two others (Paper covers and Water erodes Rock). Every suit has the familiar ranks of Ace, King, Queen, on down to 2, plus its own Joker for more advanced games.

The games for the Janken deck range from the very simple (War) to the mind boggling (3-D Sudoku). Some games focus on the Rock, Paper, Scissors logic while some games are just more fun with five suits. The deck can be reduced to three suits for children’s games or you can combine the cards with a standard deck to play with nine suits at once. All of the official rules for the games can be found at JankenDeck.com. For players who would like to try their own hand at game theory there is a place on the website to submit your own favorite games for the deck.

“As soon as I came up with the concept for the deck I had all these game ideas. ‘How would you play solitaire with these cards? How would Hearts or Spades play differently?’ It’s so cliché to call anything a game changer, but this kinda literally changes the game!” Jeffrey Daymont, artist and creator

And where does the name “Janken” come from? In Japan, the hand game Rock, Paper, Scissors is called “Jan-Ken”. Not to mention it is a lot easier to say than “The Rock-Paper-Scissors-Water-Lizard Deck”.

California artist Jeffrey Daymont was inspired during an episode of Big Bang Theory when the character Sheldon explained the game “Rock, Paper, Scissors, Lizard, Spock”, a game that was actually invented by Sam Kass and Karen Bryla years earlier. In this five weapon game you still try to outguess your opponent, but the odds of getting a tie are smaller. “The game sounds complicated but the math and geometry behind the concept are actually pretty simple” says Jeffrey, “and some of the best games have very simple foundations.”

“As far as I could tell, no one had made a deck like this already, so if I wanted one I’d have to make it myself. And If I was going to make it myself I’d better do it right!” After getting permission from Sam Kass to expand on his original idea Jeffrey started laying groundwork for his biggest art project to date. 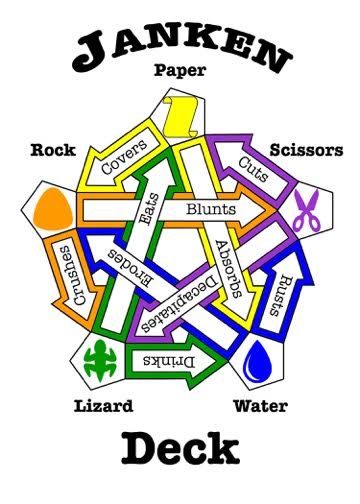 The goal was to keep a very traditional look to keep everything familiar to new players. The pips representing the suits are simple and bold, the face cards represent real kings and queens from history. “I think a main objective for classic face card designs was to make them hard to counterfeit. The patterns are pretty but that also makes it harder to cheat!”

The fifteen kings, queens, and jacks in the deck were chosen partly for their influence in history and partly for who had the best looking portraits and statues. The side arms and patterns were all chosen to reflect their respective cultures. The characters in the five jokers are all tricksters from folklore like China’s Monkey King and the Pacific North West’s Raven. Since there is no high card in the Janken Deck, all five aces get a big fancy pip too.

“You would think that coloring in a few square inches of art should be easy…  but every card needed to have a different look, a new arrangement of patterns and shapes. Every card that I finished was like solving a puzzle. Then I would start the next one, looking at the blank space and wonder ‘how am I going to make this one special too?’.”

Each deck of cards contains the whole art collection, but there will be some larger prints of the artwork available too.

Designing the artwork for the cards was just the first challenge. The second part was creating fun games and writing rules that are easy to understand. The new element introduced with the Janken Deck is the idea of “Stronger” and “Weaker” suits. For any two suits, one is stronger and one is weaker. For example, Paper is stronger than Rock, so a 2 of Paper can beat a King of Rock. In games like “King of the Hill” you play stronger cards on top of weaker ones. In “Klondike” you can play a 5 of Paper on the stronger 6 of Scissors or 6 of Water. Each deck comes with a “Rule Card” and “Diagram Card” that shows the relationships between all five suits.

For more challenging games you can play with the Jokers. When these are in play, Weak suits become Strong, and Strong suits become Weak! “What’s fun for me is that I haven’t even figured out the best strategies for these games yet. Everyone will be starting on a level playing field and discovering tactics as they go!”

Of course the real challenge in game theory is creating an experience that is not too easy but not too hard. Something in that sweet spot that is challenging and fun so it is rewarding when you win. The games and puzzles at JankenDeck.com come in a variety of levels and many have easy and hard versions, so there should be something for everyone!

About Jeffrey Daymont and the Janken Deck:

Jeffrey Daymont is a Southern California artist who has been a professional juggler for over 30 years. The Janken Deck is his first project for the gaming community and he’s excited about finding a new way to entertain people through creativity.