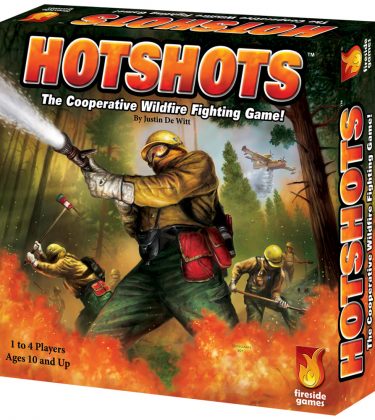 Editor’s Note: As a kind of content geek, I try new formats. So, here’s a new interviewette for tabletop designers. We promise no TL;DR.

Let’s see how Justin De Witt, designer of Hotshots (a game from Fireside Games that is AVAILABLE NOW) does, shall we?

BGB: Attention is money, my friend. What is the elevator pitch for Hotshots?

Justin De Witt: Hotshots is a press-your-luck wildfire fighting game where 1 to 4 players work together to try and put out a raging forest fire. Players move to burning tiles and roll dice trying to match the combination shown on the burning tile. The more symbols you match, the better you will do, but fail to match a symbol on a roll and the fire gets worse. You can use vehicles to help your battle, but at the end of each turn the fire spreads by drawing a Fire card. Players win if they put out all the flames and lose if 8 tiles or the Fire Camp scorches.

Justin De Witt: I wanted to make a press-your-luck game where the consequences of failure actually mattered. I experimented with a few themes, but the idea of a fire getting out of control worked SO well it quickly became the obvious choice. 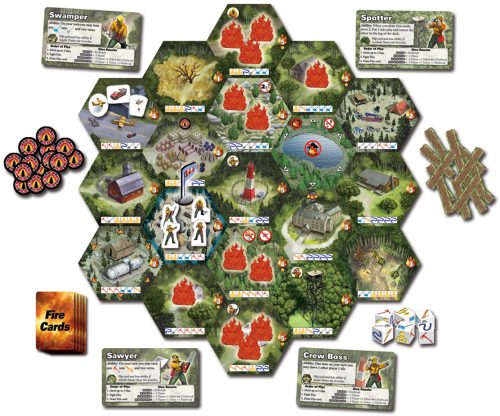 Justin De Witt: There’s nothing quite like Hotshots out there right now. This is an easy to learn co-op game that will really try hard to beat you. There is also a ton of replayability between the tile arrangements and how the Fire cards play out. If you’re looking for a game that’s going to be easy to teach, challenging to win, and tense as heck, this is your jam!

Justin De Witt: Those really cool plastic flames that are in the game were a huge challenge to get right. The first versions didn’t work and we had to delay the game because of it. There may have been tears involved…

BGB: Thanks for telling us a bit about Hotshots. Let’s wrap up with the key specifics (play time, number of players, and the link to the game) and also, since I think you can tell a lot about a person by understanding their sense of humor, what’s a good joke to close this interviewette?

Justin De Witt: Sure thing, Hotshots plays in 1 hour, for 1-4 players ages 10 and up. You can buy it NOW on our website at www.firesidegames.com/games/hotshots or Amazon at http://amzn.to/2xi0U0i.
I’ve got a joke you’ll like; What’s the worst thing about Ancient History professors? They tend to Babylon.
OOOOOH, see what I did there!?!
DISCLOSURE: Boardgame Babylon is not liable for damage to your sensibilities from the jokes these game designers submit. Justin ‘De Witt’ indeed!
More quick reads? Check out our other 5 Quick Questions posts.