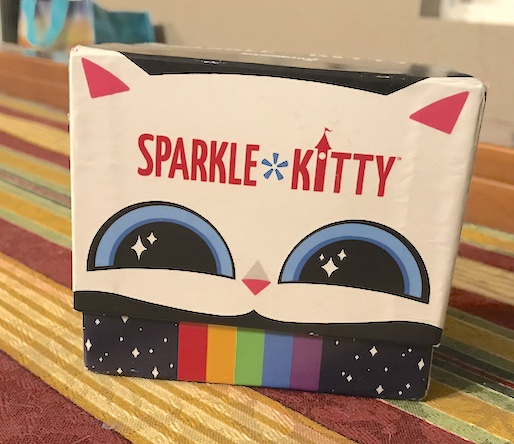 Sparkle*Kitty is a cute game I wish I’d had years ago. Simply put, I had an easier time getting my son to play board games over the years than I ever did with my daughter. Sure, when she was younger, my daughter delighted in any time with Dad. But it’s not really her fault; there are never enough games with girls in the driver’s seat (although I will soon talk about the amusing One Deck Dungeon, which pushed the other way). That’s one reason why Sparkle*Kitty is delightful. SK tells a story that makes sense for the girls, with self-rescuing princesses that are in control. More importantly, it’s a charming party game that rides the theme well for both families and kids-at-heart.

Sparkle*Kitty is designed by Manny Vega and published by Breaking Games, who have had past success with Letter Tycoon and the wildly successful Kickstarter for Rise of Tribes earlier this year. The game allows for 3 to 8 players and works fine for ages 6 and up. Generally, you can play it in 15-30 minutes (depending on the number of players) and I say the more, the better.

Players in Sparkle*Kitty get to play as one of seven cool princesses with various personalities. Each player gets a hand of nine cards that are used to build a tower with four of them, with their princess on top. The remaining cards become their starting hand and they begin play with the goal of getting rid of first their hand cards and then the tower. Generally, players will need to clear their hand card first, then they can disassemble their tower to gain freedom and win the game.

How do you get rid of the cards? That’s the amusing part. The tableau in the center has two cards from the deck with funny or quirky words that are said together on player turns – this is ‘casting a spell’. When the active player would like to play a card, they need to match the color or the icon of one of the cards, then say the words. This is funny stuff as the words tend to be quirky and cute stuff like: 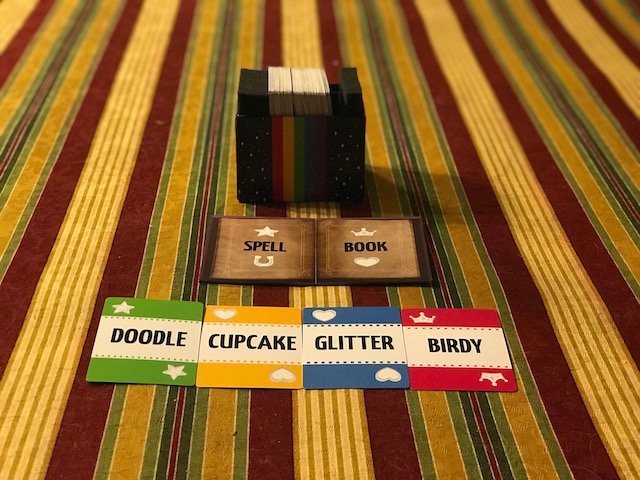 Okay, not all of them are sweet, but that’s part of the fun. Some cards will offer players an advantage (like playing as many cards as possible or forcing other players to draw), but many of them (black cards labeled “Dark Magic”) will require players to say another word whenever they cast their spell. While people don’t mess up all that much, you can decide how tough you want to be on them for partially flubbing a word here and there.

That’s part of the amusement, in my book. More special cards exist, with some rule-breaking options, some wild cards and even the super-cool Sparkle and Kitty cards that let you draw back to your hand from your Tower instead of the deck. But the real fun is everyone repeating the silly spells each turn while trying to get rid of their cards. Many tongue-twisty moments came up, especially with the Dark Magic cards in use.

Sparkle*Kitty ends when that happens and the princess who discards her last tower card wins. The game from rules to finish is less than 30 minutes with typical players. I love that designer Manny Vega built this game, which could have been done with a variety of themes, specifically with the empowered princess in mind. As I said, I wish my daughter could have played it as a younger person and seen us all need to play self-rescuing princesses with such a funny theme. Even with kids in the game, who stayed engaged in our game due to the bright colors, funny words and great artwork of powerful princesses, we played the game quickly. The under-10 year old players wanted to play again immediately and asked about how soon they can get the “Kitty Game.”

The answer is right now. Sparkle*Kitty is just bursting out now after a limited run back at Gen Con 2017. It’s now on Amazon for $20 and at your local high-quality hobby game store. If you have young kids, maybe bump up that rating by one level because you may just need the game with the rainbow-vomit kitty box.