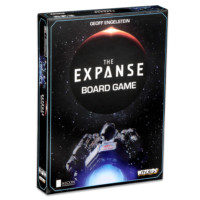 Hillside, NJ – October 4, 2017 – WizKids is pleased to announce The Expanse Board Game, designed by Geoff Englestein, and based on the acclaimed and visionary television series from Syfy and Alcon Television Group, is available today in North American game stores.

The Expanse Board Game is a game of politics, conquest, and intrigue for two to four players. Players spread their influence through the solar system onto important Bases using characters and events in the Expanse Universe.

Players represent one of four factions, and with their efficient use of actions and special abilities, decide the rule of the solar system. During the game, players are immersed into the exciting universe of The Expanse, with images and events from the hit Syfy series.
Editor’s Note: Geoff Engelstein is well-known for his many space-themed games, including Space Cadets, Space Cadets: Dice Duel, Space Cadets: Away Missions, and more – including fantasy brawl game
The Expanse Board Game is available for $49.99 at Friendly Local Game Stores and Amazon.com, the U.S. streaming home for the hit series. Pick it up today!