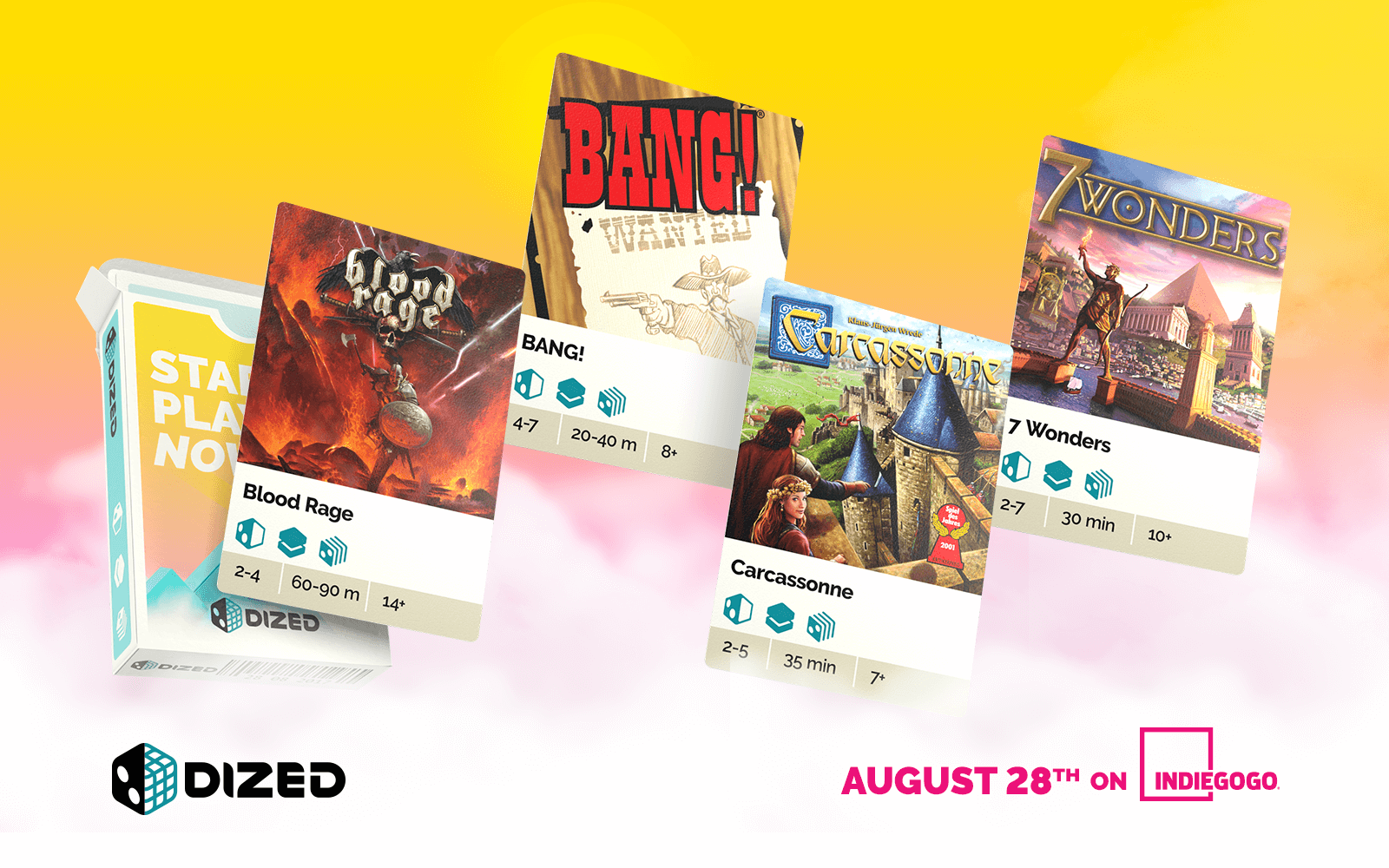 Dized announces Blood Rage, 7 Wonders, Carcassonne, and Bang! to be first games to get custom Dized tutorials. The IndieGoGo campaign for the app launches on August 28th.

[Helsinki, Finland, July 27, 2017] If you ever just wanted to pick up a brand new board game, sit down and play straight out of the box, soon you will be able to. Dized is an application that puts players in the game from the moment the box is opened with interactive tutorials. These step-by-step guides are like a friend at the table who knows the rules inside out and the best way to teach them. Most importantly, the app allows players to make their own decisions and choices and reacts accordingly.

The company announced today the initial line-up of interactive tutorials slated for the app. The first games to receive the Dized treatment are Blood Rage, 7 Wonders, Carcassonne and Bang! In the works are tutorials and other content related to these games, such as the setup and the rule lookup tools.

“We’re thrilled to be working with such esteemed titles and publishers. The diversity of this library shows that Dized works with a variety of different games, ranging from casual to core. Eventually, we want to bring these tutorials for all games out there, and that’s one of the reasons why we’re crowdfunding Dized through IndieGoGo – to be able to scale up in a way we wouldn’t otherwise be able”, states Dized CEO Jouni Jussila.

Dized has been under development since 2016. After a successful proof of concept released last year, a new version of the app is now ready to show the real potential of Dized

“We’ve discussed with players from all backgrounds and one thing is clear: there is a need for a better way to learn games. Dized has already been tested with audiences and the feedback has been spectacular, not just among players but with all branches of the industry,” Jussila continues.

Dized’s partners include some of the biggest names in board game industry, such as dV Giochi, Hans Im Glück and acclaimed designer Eric M. Lang.

“If you love playing games and don’t like reading rulebooks, there’s no reason for you not to support Dized right now. Dized is different from a regular “How To Play” video, because videos aren’t context sensitive. With Dized you can experience the game as you are learning it. You can even ask it rule- related questions,” Eric M. Lang explains.

Dized is free to download and available before the campaign starts with demo content. During the campaign, backers will be able to purchase subscriptions that give access to premium features. On top of the interactive tutorials, rule lookup, and setup tools, the team has big plans for Dized. The goal is to create the ultimate companion app, no matter if you’re looking for community features, expo tools or additional digital content.

“Our goal is to create a one-stop-shop for board games. So come August 28th when the IndieGoGo campaign launches, be sure to show up and change the world of board gaming forever. We have tons of awesome perks lined up, and big game announcements to follow”, concludes Jussila.