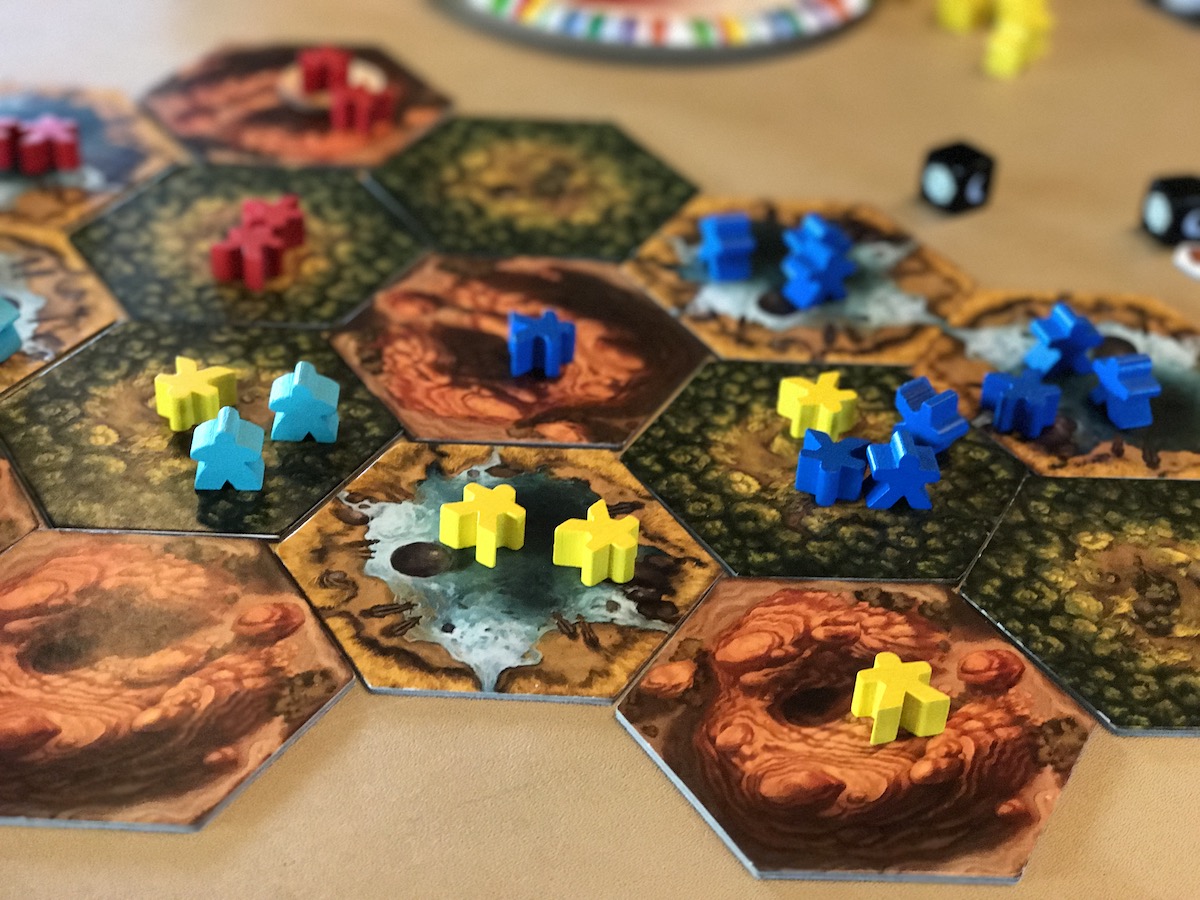 The things that make a good game is a subject I ponder a fair amount as both someone who talks a lot about games and a sometime-designer. Not a great game, mind you. I might advance the idea that what makes up a good game and what makes a great game or not just the same thing but more so. I know, it sounds odd but, dear reader, indulge me for a moment. 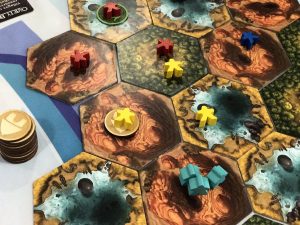 To me, a great game is some kind of lightning in a bottle. Great games may contain something that just doesn’t exist in lesser quantities in good games. The mechanisms click, possibly with the theme or the components, the creativity it inspires in players, the collaboration, the mix of strategic options or maybe the various paths to victory. Some kind of magical silver string pulls it all together to make an experience you want to enjoy over and over. The ‘one and done’ good game may not really have that mix of elements sitting there, ready to be augmented.

But maybe I’m wrong. This came up as I was doing some recent playtesting, with the highlight being Rise of Tribes from Breaking Games, pretty much the only game I played that I can talk about today.

A new game from Brad Brooks, of Letter Tycoon fame, Rise of Tribes is a quick-playing early civilization game with exploring, conflict, tech, and growing your tribe. Despite the many options in the game, it plays in under an hour, has a unique decisioning system, and I found it satisfying. The game is currently going like gangbusters on Kickstarter (over 1000% funded) but what else can I tell you about it. 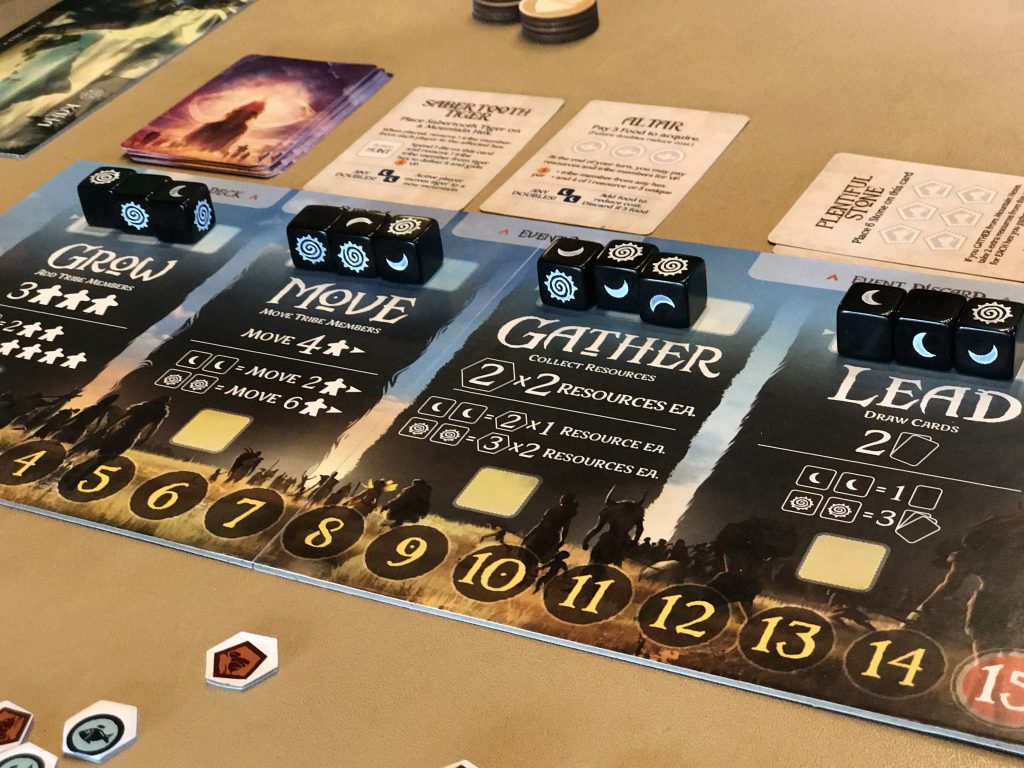 Rise of Tribes’ central mechanism is simple; roll two dice and add them to the two of four options you plan to use this turn. Those options include adding tribe members (3 of them), moving them (4 total spaces), gathering resources from hexes your tribe members occupy, or drawing two victory point/advantage cards you can buy with gathered resources.

The interesting part about this game is the dice element. The dice are six-siders with two each of blank sides, moons and suns. Cue the Credence when you see those moons because they mean bad things. At all times, three dice are at the top of each of the four options. When you add a dice to select the action, it changes the makeup. Now, the three dice only matter if there are pairs of suns or moons. If the former is true, you get a bonus to the action (usually just a higher number item). And, yes, two moons means you get less than the normal action. Kudos to Brad and Breaking Games for making this intuitive with their board design. 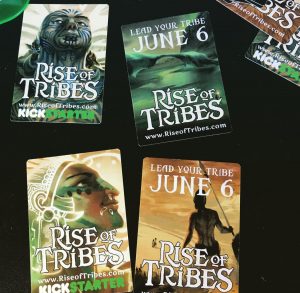 After your two actions, you can use resources to buy cards from your deck (all the same) that you previous drew. The cards are key because they not only give you points, they also mitigate some of the penalties in the game, give you raw victory points

The other thing you can build is a Village. These are exceptionally useful as they hand you a victory point for each turn you begin with them intact and each player has a different resource combo to build them. They also give you the power to effectively cycle your bonus cards. The only problem is – they kind of attract attention.

There is conflict among the Tribes, but it isn’t annoying like some games of this nature. It’s nothing personal – we’re just talking about space here. If you want to share the land with other tribes, you can. Both of you can gather there and no one gets hurt. But, if you get more than five people in one hex, you’ve got a conflict on your hands. This is resolve by removing a pair each until only one tribe color is left. This also happens if you are alone and just pile too many of your Tribeeples in one place. Space is space. If there’s a Village on the spot, you don’t get to take it over if you kill the Village owner, your tribe is just too excited and they burn it to the ground. Just like in real life. 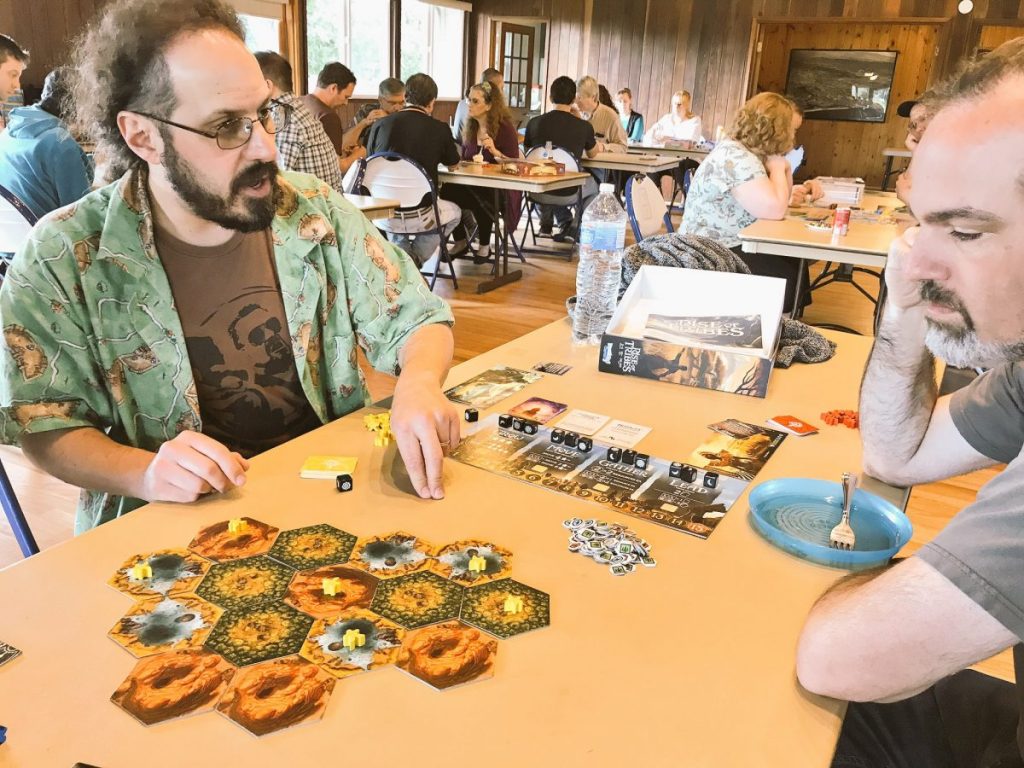 The game is played to 15 points and it ends immediately when someone hits that goal. While the Hut is a reliable source for VP, they can be destroyed by an incursion from others. Safer is to buy cards from your deck, which also often give you an advantage in the game.

So, is Rise of Tribes good or great? Well, I think it’s very good and the last stages of play testing may push it over the edge. I think that silver string is here in the unique dice mechanism and maybe the card mix in your private reserve. The fast-playing schedule also makes the game feel like “Race of the Tribes”, which is a compliment. I can see this playing in 30 minutes with the right crowd – and that’s a lot of game for 1/2 an hour.

Rise of Tribes is on Kickstarter right now, through July 6th. A nice upgraded version is also available. Breaking Games is making a name for itself with some new offerings that look interesting. Definitely keeping an eye on them.

Disclosure: Played a play test copy of Rise of Tribes, provided by Breaking Games. I personally know Brad and Peter Vaughn from Breaking Games. But, you know, I know a lot of people.

One thought on “Session Review: Rise of Tribes by Brad Brooks and Breaking Games”