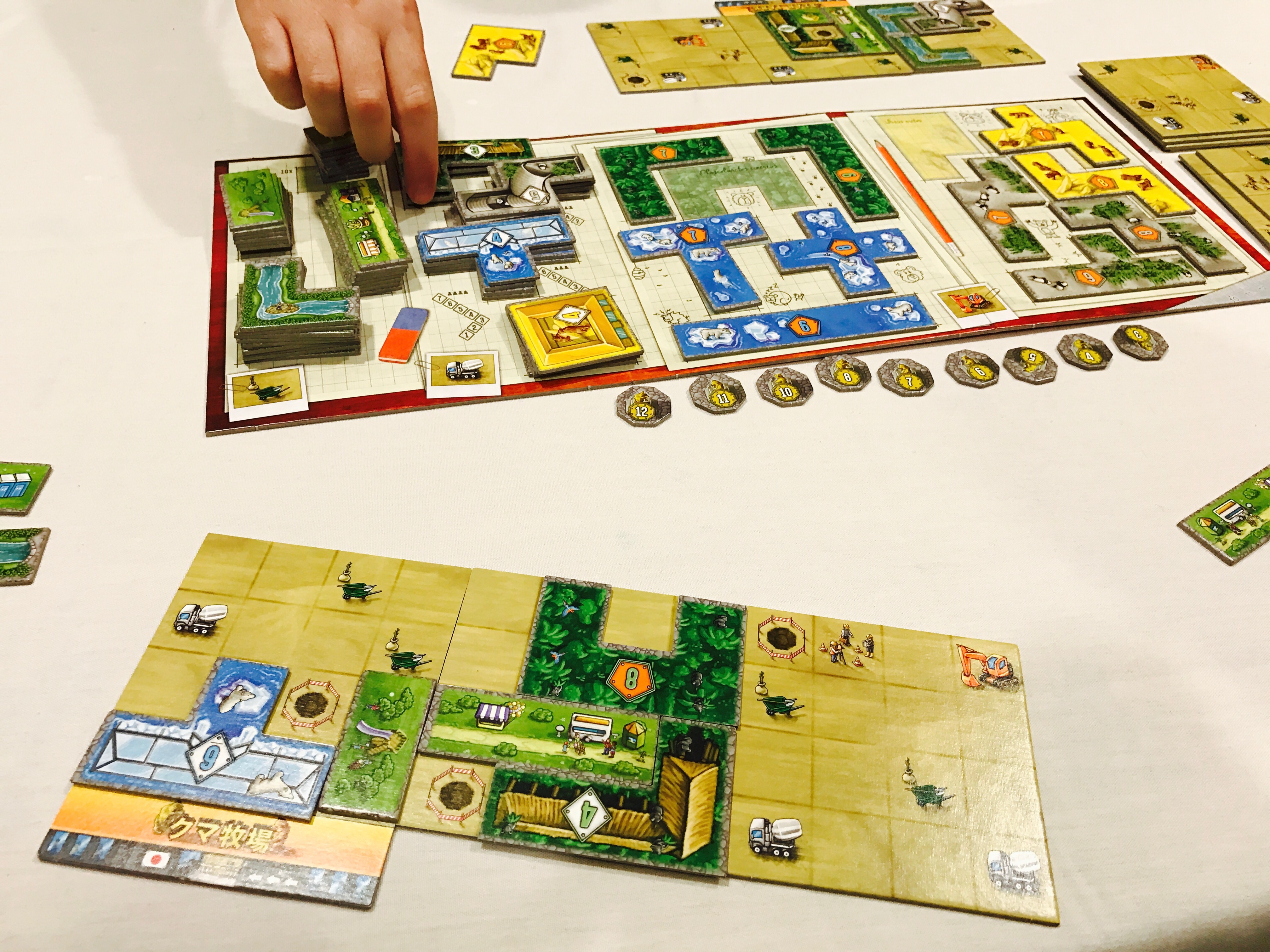 The Gathering of Friends, Alan Moon’s invitational, is always a highlight of the gaming year. One of my favorite things about the show is the opportunity to game with designers who have become friends. It is a Gathering of them, after all. Playing games with designers is a bit like going to dinner with a chef or having wine with a vintner – the perspective they provide can help deepen your appreciation of a game immensely. Some of my favorite moments from the years I’ve spent at GOF are the post-game discussions about something we have played, metering out the specific mechanisms and how they worked, recalling where we’d seen them in the past and judging their reimplementation, and talking about how the title fits into something like Bruno Faidutti’s Ideal Game Library concept – only the games you need for all moods, situations, player types and numbers. Those convos are sublime for the engaged tabletop gamer.

The other major delight is meeting designers whose work I love and this year, a key meeting was Phil Walker-Harding. I’d call myself an OF (Original Fan) of Phil’s work, way back to his first game with Z-Man,

Archaeology: The Card Game. This light but clever design found its way to me when I was running demos for Z-Man Games (Yes, I was a Z-Forcer) at Strategicon conventions. I taught it to so many people, but never lost interest. It played wonderfully with families and gamers could admire the pleasantly clean design. NOTE: The game is out of print, but an expanded title based on it called “Archaeology: The New Expedition” is available here.

Years later, I was unsurprised that modern family game winner Sushi Go was from Phil – it’s such an immediate delight and imminently playable. Gamewright was lucky to pick it up. Sushi Go Party is even better, as I’ve previously noted in this space. Everyone on my team at work owns it now because they love it so much. His SDJ-nominated Imhotep was another story. I wasn’t sure the first time out, but as I have chronicled, I found its brilliance a few plays in. It’s a standard gateway for us now. His other well-known title, Cacao, is another winner that I want to play a bit more before commenting, but it warranted an SDJ recommendation in 2015. Phil has the goods, folks.

Over the years, my enthusiasm for his titles hasn’t gone unnoticed in this era of social media. I’ve tweeted back and forth with Phil a number of times, but it was still a distinct pleasure to actually shake his hand at Gathering of Friends 2017. Having missed last year’s GOF due to a new job, this was my first chance to sample his new games prior to publication. When we met, he first brandished his just-released Bärenpark, which is now available in Europe from Lookout and will be hitting the US via Mayfair this summer. Amusingly, he brought it out to play with Matt Leacock and myself after I’d been asked what I was interested in playing. I’d expressed an interest in Cottage Garden based on my wife’s deep love of Patchwork. Phil offered up Bärenpark as being designed to scratch a similar itch.

“I designed Bärenpark after hundreds of plays of Patchwork with my wife,” Phil noted. Sounds familiar to me, and many tabletop gamers, I expect. Uwe’s delightful two-player game is firmly planted on the “Couples’ Game” list now. Cottage Garden, which I’ll talk about in my full GOF report, is the big brother of Patchwork and plays up to four. Bärenpark has the same pentominoes you find in those games but the goal here is to build out your bear (that’s what ‘baren’ means, folks) zoo park with various attractions. I wondered about the similarities to my own Theme Park game, which also uses pentominoes but they were limited to just that construction bit (see Princes of Florence for the original idea, I expect).

Phil also noted the influence of the wonderful little game Mosaix from designer (and game illustrator) Christof Tisch. That roll-and-assign winner from 2009 is due to come to my table again soon after Phil referencing it in regard to Bärenpark.

How Does Play Bärenpark?

Bärenpark turns are simple enough – just build a piece from your supply and gain new pieces based on what you play. You play the pieces to a swatches of parks (you start with one) as 4×4 grids, each with symbols that let you acquire new pieces of varying types (and values) that decrease as they are acquired (Thurn und Taxis-style). You need to then fit those pieces onto your board so there is no overlap or overhang. Since this is a euro-style game, you collect new piece(s) at the end of the turn and have time to consider how to use them while the other players take their turns. You may get more than one per turn, but you only place a single one each turn.

While the big pieces delivered by building over dump truck spots are a lot of points, they’re also unwieldy at times and you will often need to go back to the small park pieces to fill in the empty spots. There’s a reason to do so – the game clock is completion of park grids with an also-decreasing value in bonus delivered. These are manhole cover tokens that are automatically placed over the single pit on each grid after all other spaces are filled. These values start with the biggest points in the game and recognizing that helped Matt win our game (I was caught up in accelerating to the high point park pieces).

Of course, you don’t just fill one 4×4 grid. Additional boards can be had by building over worker spaces, up to maximum of four, and they’re a chance to gain more bonus points from placement plus that completion bonus. Matt astutely noticed this was a strategy for maximizing points because you didn’t just score from just your placement, but from the completion. Did I mention there’s a downside to playing games with great designers? Yeah, they win a lot.

Bärenpark has an elegance I associate with Phil’s games, yet there are things to explore and enjoy through repeat plays. Much like the subtle choices of Imhotep or the realization that Sushi Go has enough information to make choices better if you want to play it more than casually, Bärenpark will surely reveal more as the game gets more play – and it will certainly do that. I think this is an early runner for SDJ consideration and it would be a welcome addition to gamer and family collections. To that end, it plays in about 40 minutes and you can teach it in two. Watch for it.

I also played a hush-hush prototype of Phil’s that had his signature simplicity that often reminds me of Michael Schacht. From me, that a high compliment, indeed, as I believe Schacht to be one of the top 10 of all time. Again, I was unsurprised that the prototype was snapped up by a publisher promptly and was in much demand from the players, too. The title will be well-liked when it arrives on the scene and was much discussed at GOF. I missed two other protos Phil had but I look forward to their publication with interest as I heard many other positive reviews of them.

Thanks to Phil for the introduction to his games and the great convos. Bärenpark is due out from Mayfair in June 2017, just in time for the summer convention season.

Disclosure: Not sure if I need it but Phil’s a good guy with whom I’ve tweeted for years. This was our first meeting.