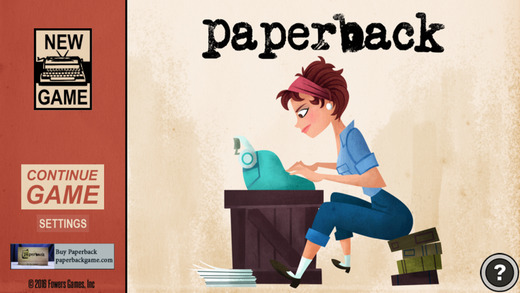 Paperback, the smash-hit game from designer Tim Fowers (of Burgle Brothers and Wok Star fame), has come to mobile devices and I couldn’t be more delighted. Thematically, Paperback has players trying to finish a pulpy paperback novel by constructing words throughout the game, which is pleasantly brought to life with the amusing artwork and quick game play.

Paperback the original board game is typically described as the baby of Scrabble and Dominion, which is apt. Players get to make words from a hand of letter cards drawn each turn in deck-builder style. Each letter has a value and whatever you construct for the turn gives you money to buy new (often better, higher value) letters, some of which have special powers. You can also buy victory point cards if you have enough money. Despite being the key to winning, they clog up your deck with wild cards that have no buying power. There are also special powers on certain letter cards that do cool things like double word scores, draw extra cards and other nice things. There’s a way to get points for longer words, too. It’s a load of fun for wordsmiths and casual players alike.

You want a detailed description of play? This guy wrote it out (although he added an ‘l’ to Tim’s surname, which I expect isn’t uncommon). You can also watch this video. You didn’t think I was going to explain it rule-by-rule did you? Come on. Where are you?

What I Love About The Paperback App

I need to disclose something. I’m a recovering iOS deckbuilding addict. I’ve played SO many games of Ascension and Dominion on my iPhone that even my careful documentation of plays ceased to have 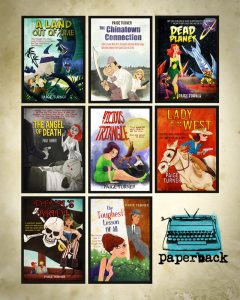 meaning. The quick play of these games against a single AI player is almost too compelling. Playing them swallowed all my little bits of time on my device and I finally had to stop so I could read books and get back to completing mini-workflows in those odd moments. But Paperback has me back off the wagon and loving it.

Normal Paperback as a board game has the same challenge that word nerds face when trying to find opponents for Scrabble. Simply put, if you have an excellent vocabulary, you just have a natural advantage. Like being tall in basketball, it isn’t everything but it sure helps.

While modern players have Qwirkle as a good alternative that levels the playing field with color/shape combos instead, those of us who just love words still yearn for the opportunity to build them from a jumble of letters. With the Paperback app, I can indulge this passion with the AI player when no one else is available. Furthermore, the game has helpful setting options to allow players to adjust the length of their games. I’ve often opined that some mobile app games are simply too long because I have other things to do (the opposite of how I feel when I’m at a table with excellent people). I welcome Paperback giving the player control over the length of their experience.

Furthermore, Paperback rides on the Loom Game Engine and it works really well. Animation and game speed are all excellent. Fowers isn’t just a brilliant board game designer – he has a background in technology so I’d expect nothing different from his apps.

A prompt update eliminated one of my pet peeves – confirmation windows – ugh! Just because that was considered good coding in CS classes, it’s a nightmare by modern UX standards…okay, rant over. However, Paperback still makes me listen to its theme music instead of letting me bring in my own playlist. As a passionate music-lover who carefully curates what goes into my ears, this is a problem. The theme music is pleasant and appropriate but it isn’t going to make me not want Hope Sandoval of Mazzy Star to serenade me while I play my word nerd games. That sultry voice just gets the little gray cells going. Full rules are now available, too – not just a video link. Some of us still read, including those who want a Paperback app! I feel sure Tim is addressing those issues in future releases.

The Final Word on Paperback for iOS

Paperback is a well-implemented version of a game that is ideally suited for the mobile device play. I love it and certainly recommend you give is a download. I’m sure it is available for Android somewhere, wherever those things happen.

GET PAPERBACK ON IOS NOW

Disclosure: An app code was provided for review by the publisher.