Charlotte, NC, October 18, 2016 – Excalibre Games, long-time publisher of high quality historical board games, is pleased to announce the launch of their first fantasy 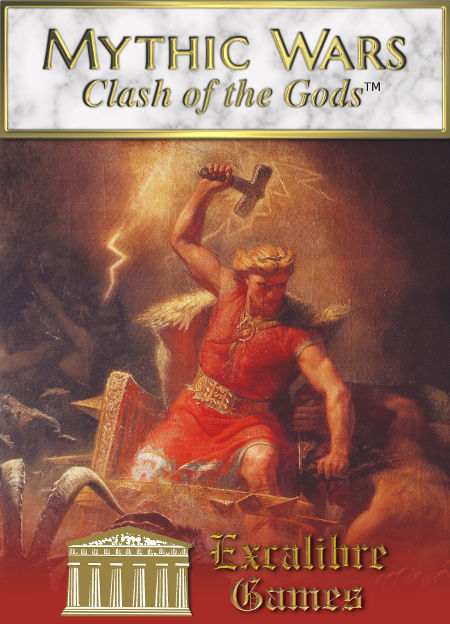 Mythic Wars is a new tabletop game series designed by Eric Woodward, where up to 8 players can join in a battle between the gods for control of the universe itself. The first title in the series, “Mythic Wars: Clash of the Gods”, features 72 gods and goddesses from among 6 different pantheons, including such legendary figures as Zeus, Osiris, Amaterasu, and Thor, and is recommended for 2-8 players, aged 14 and up.

Plus, as a special bonus during the campaign, Excalibre Games will also be offering the first expansion set in the series, “Mythic Wars: Cthulhu Rises”, which adds 16 new cards based on the writings of HP Lovecraft. When combined with the Clash of the Gods base set, the expansion allows up to 8 players to join in a co-operative battle against such classic horror icons as Azathoth, Nyarlathotep, and Cthulhu himself.

“Mythic Wars will offer players a superb, action-packed, and playable game,” said Robert Mosimann, head of Excalibre Games, “while maintaining Excalibre Games high standards of quality, depth of play, and well-researched authenticity. It’s a new and major change of direction for us which will help bring us into the 21st Century.”

“Mythic Wars: Clash of the Gods” & “Cthulhu Rises” are on Kickstarter now at: https://www.kickstarter.com/projects/603868199/mythic-wars-clash-of-the-gods-and-cthulhu-rises

Excalibre Games has been in business since 1975, and has produced a number of award wining games including 2 GAMA Best Games of the Year (Ironclads and Wings), a Games Magazine Top 100 Pick (Trax) and a Fire and Movement 5 Star Game (Kaiserschlacht). The underlying philosophy for Excalibre Games has always been to maintain authenticity in the products they produce, an athenticity that this extends to this, their first foray into fantasy card gaming.

Eric Woodward is a software and web designer who lives outside Charlotte, NC with his wife and two children. He is an avid gamer and hobby game designer, and Mythic Wars is his first published game.