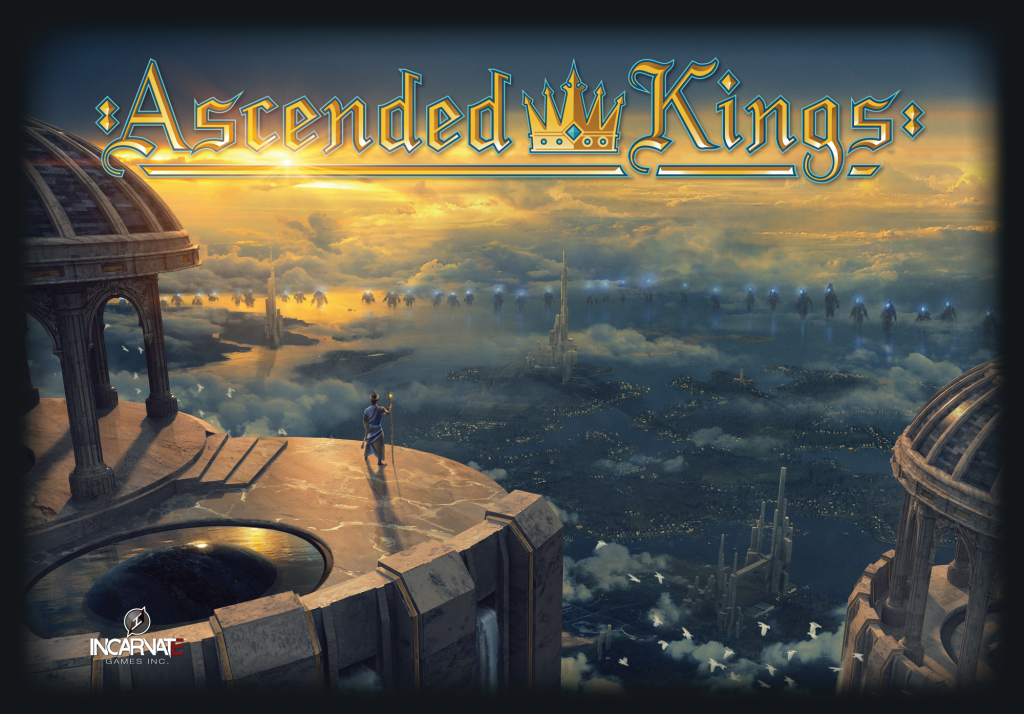 Revealed at Gen Con 2016, this debut title by Incarnate Games is launching on October 20 on Kickstarter with two amazing products!

PUEBLO WEST, CO – October 10, 2016 – Jason M. Allen of Incarnate Games, will be launching a Kickstarter to raise money to publish a Limited Collector’s Edition of Ascended Kings, and the companion graphic novel, Ascended Kings: The Fall of Empyrnea

Ascended Kings has been play tested by over forty game industry and creative professionals. Now in its finished form, the game will launch with all the final artwork and design completed. Gamers looking for a socially engaging and competitive experience will be intrigued by this unique and satisfying game.

During the production of Ascended Kings, the backstory developed to such a detailed level, we developed a 60-page companion graphic novel. The graphic novel is an action packed, gripping read, and a stunningly gorgeous book by some of the best talent in the comic industry.

The Kickstarter campaign will feature the game at $85, and the graphic novel at $25, with a bundle offer for both at $100, and various limited offers to early bird backers, including signed copies of both the game and book. Ascended Kings is in pre-production with the manufacturer, Liya International, and the game comes with a money-back guarantee to all our backers. Prolong Press is ready to print the 60-page hardcover graphic novel when the campaign is completed.

The game was designed by Jason M. Allen with graphic designs by Anthony Benedetto of Humble Beast, miniatures by Andrew Martin of Monster Caesar Studios, and concept/illustrations by Dylan Pierpont from Elder Scrolls Legends and Assassin’s Creed Rogue.

www.LastKingStanding.com redirects to the Kickstarter on October 20.

About the Story: As one of the four Ascended Kings, you sensed this day was inevitable. The High King is dead. Your own immortality dissolves before your eyes as the power of the bloodstone rings fades.

A surrounding army of stone giants march from the oceans intent on laying waste to all Empyrnea. Only one hope remains. A single chance for the four kings to restore power to the bloodstones. The ruling power of Empyrnea’s high city, the Enclave, secretly summons forth the kings. In the immolation chamber high above the city streets below, the Enclave reveals the alarming news—The power of the stones may be returned only by blood… The blood of ascended kings.

About the Game: The thirst for power is never quenched. In the game of Ascended Kings, you have been set with an ultimatum; face each King in combat to the death or let Empyrnea and all you hold dear, fall. You and up to 3 other players take to the arena… prepared to decide the fate of all, on the outcome of a single battle.

The Ascended Kings board game is a high fantasy battle royal game with no player elimination. As walls of fire close in around the combatants, the Kings engage in free for all combat to the death—their sights set on taking the bloodstones from their rival Kings. As Kings fall, players are reborn in the fight as powerful entities known as Revenants. The Omega Stone, fabled to hold ultimate power, will be revealed only to the King or Revenant able to possess all four bloodstones.

Will you face the arena with shear force? Will you negotiate with your rivals to achieve dominance? Will you survive to become the Last King Standing? Discover who among you is strong enough to claim the Omega Stone, in the battle of Ascended Kings! 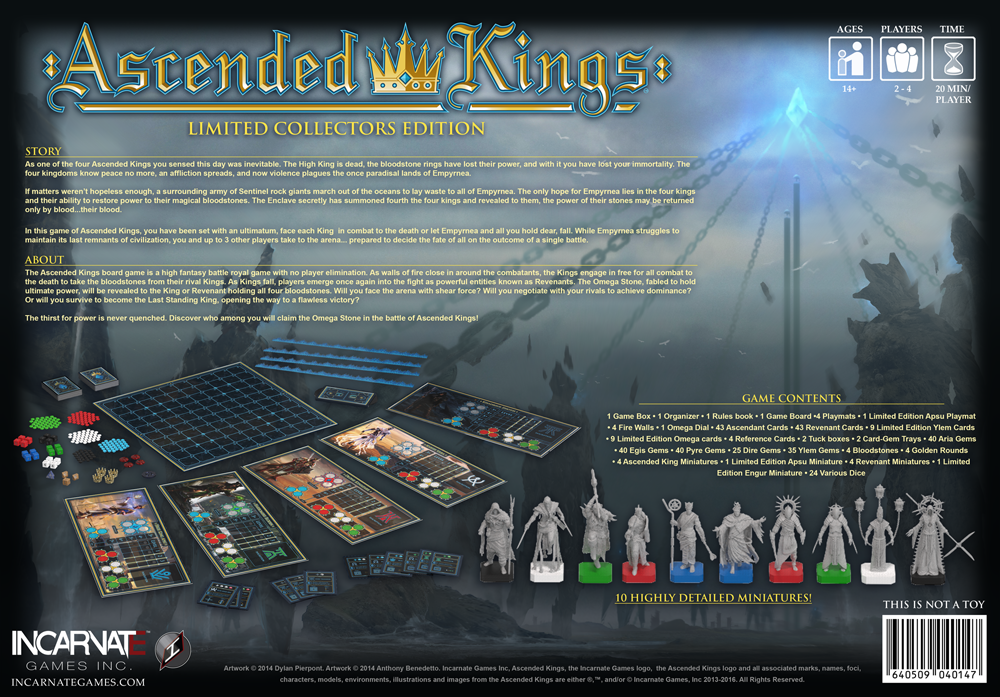 About the Graphic Novel: Ascended Kings: The Fall of Empyrnea is a 60-page, fantasy graphic novel based on the arena combat board game centered around the four kings of Empyrnea. The graphic novel follows each king separately, before weaving the four story arcs together in an unforgettable arena combat climax. Each king originates from a completely different land and culture and has dominion over a unique form of energy. Multiple layers of detail and story lore make the graphic novel an extremely rich and engaging experience.

Conceived by Jason M. Allen and Nick Macari, written by Nick Macari and illustrated by Renae De Liz & Ray Dillon (artists from A Game of Thrones and The Legend of Wonder Woman).