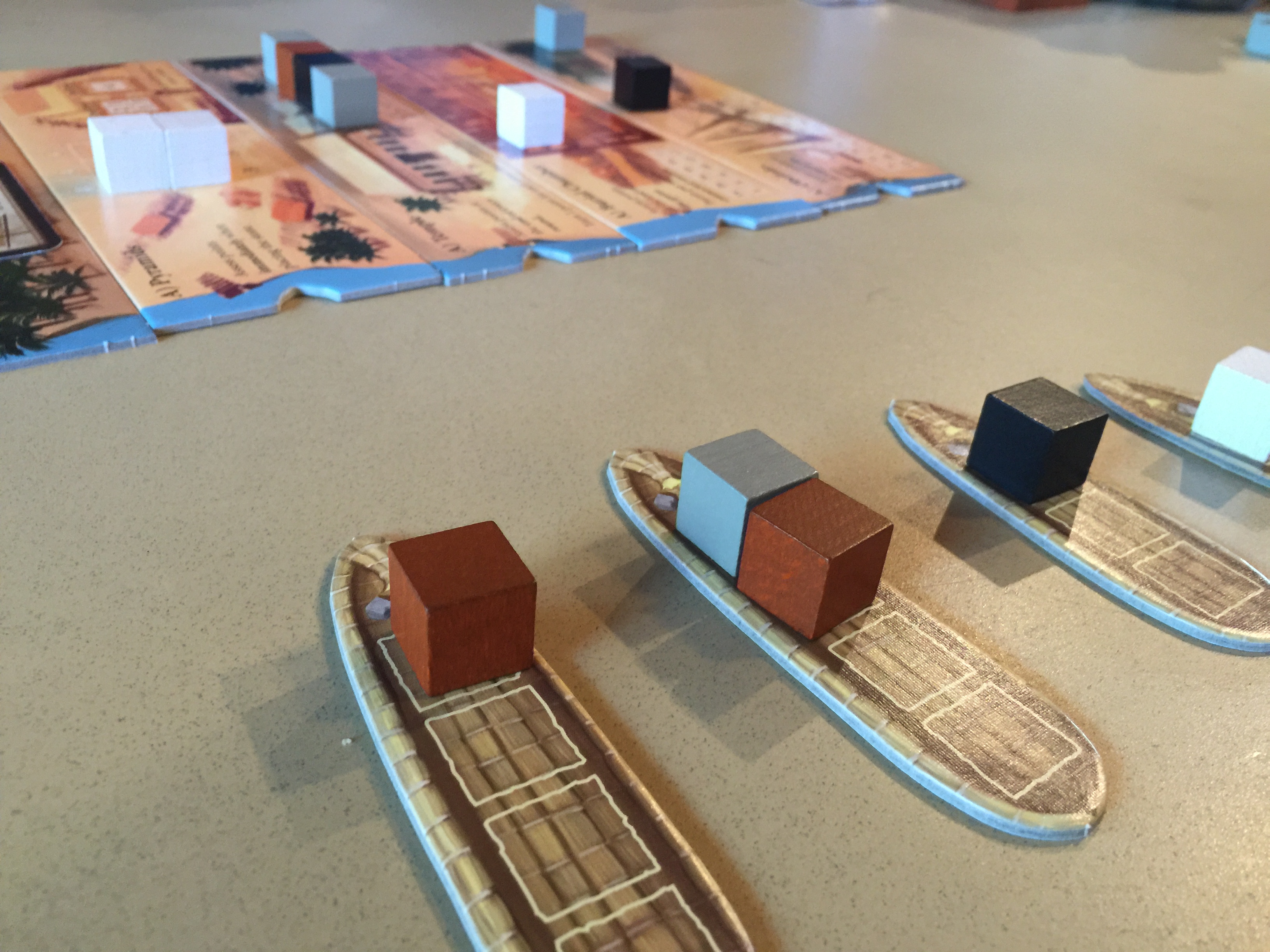 Imhotep is a welcome addition to our gateway games collection, but I almost missed out on it. My first play was fine, but I was underwhelmed. This SDJ nominee was my final game of the day at an event last month. I had wanted to try out this title that was going to challenge Codenames for the Spiel Des Jahres and only spotted it late in the day. I had faith in the possibility that it could take on Vlaada Chvatil’s effortlessly wonderful party game because I’m a fan of Phil Walker-Harding‘s other games like Sushi Go!, Archaeology, Pack of Heroes, and Cacao. The game was loaned to me from another party who waited until I played before mentioning that he felt similarly (good, not great), suggesting that maybe the nomination was an Academy Award-style ‘make up for a previous snub’ to console the open wound of the excellent Cacao missing the cut. I nodded in agreement before taking off that night.

I was wrong. Imhotep deserved the nomination and the adoration of the SDJ jury. This is a very good game that I’ve now played nine times. Despite my first impression, I bought the game to play during our summertime game-cation (where we always sample the SDJ and KDJ nominees ahead of the announcements). I was impressed with the delight the newcomers experienced playing it and I how much enjoyed exploring the nuances of the game.

Gameplay is straightforward and seems familiar, as with many great games. Players are trying to score points and win by placing stones on boats and delivering them to ports that let them score in various ways. This is done six times, with some scoring happening immediately, some happening at the end of the round, and the bulk of points coming at the end. The game has an old-school euro feel and I sense the strong influence of Michael Schacht, the master of minimalist designs that have incredible depth.

To play, you give your two to four players a pile of colored blocks and a sled tile that holds up to five stones at a time, select round cards based on the number of players you have, and then set up the modular port boards you opt to use. The port boards have two sides, with side A featuring ‘beginner’ options with simpler rules. There are also boats with one to four slots, four of which (in some combination of slots) you’ll bring up based on the round card. Each turn, players decide between three options: add up to three blocks from the player’s general supply to their sled, add a block to a boat from the sled, or sail a boat with enough blocks to a port for activation. 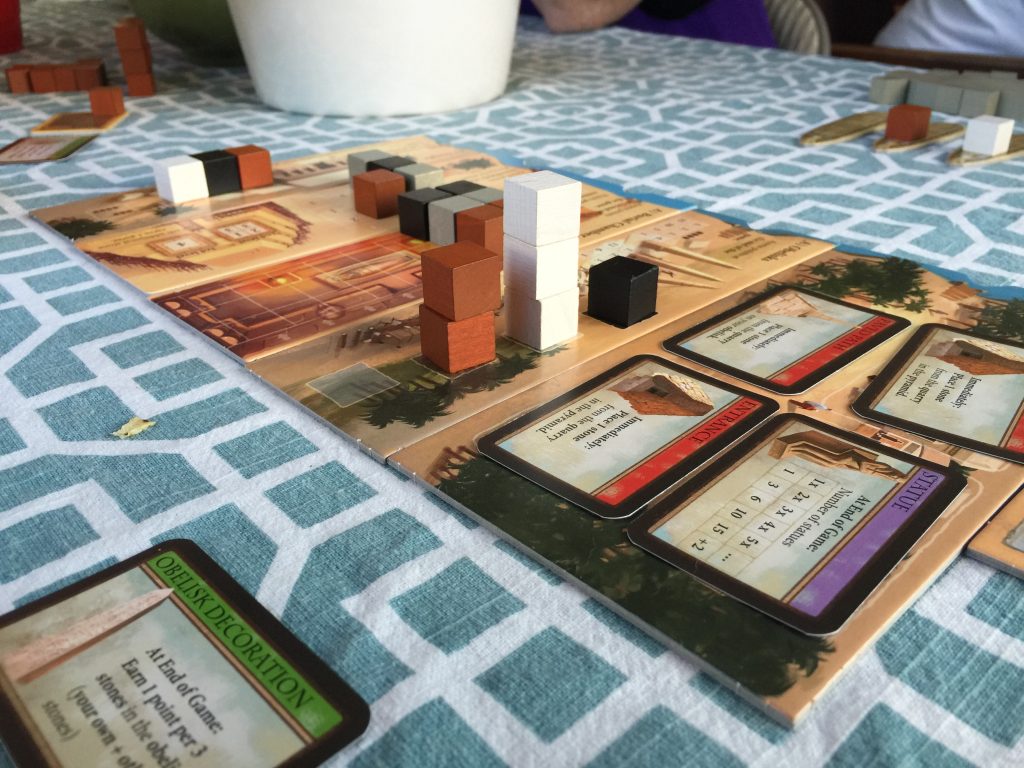 Four boats are available each round and they only can be sailed when one fewer than the number they will handle have been placed on them (pointless clarification: yes, the one-block boat needs a block). At that point, any player (whether or not they have a block on the boat) can sail it into a port. This is important because players can send a boat into a port that doesn’t help the players with blocks on it very much. Managing this narrow range of choices still makes for interesting decisions, even if it doesn’t sound that intriguing just reading the gameplay mechanisms.

There are five ports and only four boats, so one is skipped each round of play. Furthermore, fewer blocks can reach those ports if players send them early so there’s definitely some dynamics around whether players opt to play offensively or defensively. The ports resolve as the boats were loaded, with blocks at the front resolving first. In some cases, this gives that player first choice; on other ports, it just means their block goes into place first – sometimes to their frustration.

The ports are the way players score, but they work differently.

While the side A cards are ‘for beginners’, there is no reason for gamers to not begin with the side B variants. They are a trifle more complicated, but they also make the game better. Players sail the four boats six times before a winner is declared. With experienced players, it’s a satisfying thirty minutes.

Much has been made of Friedemann Friese’s 504, a game that takes rules variations to the extreme. Imhotep has some possibilities here but it’s done in a simpler way. Dominion popularized the inspiration from older games like Cosmic Encounter for modern euro games. Indeed, you can see a Dominion inspiration in the way Imhotep’s designer expanded his hit game Sushi Go! for Sushi Go Party (see my adoring review of that game here). 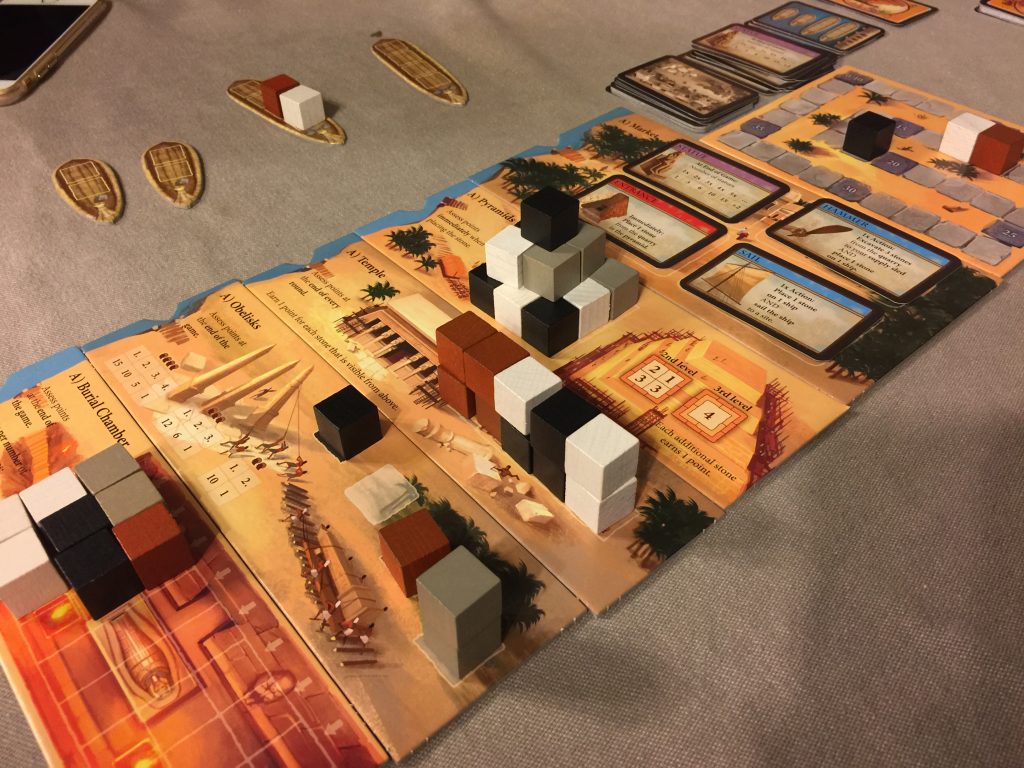 With Imhotep, the game’s central mechanism allows for new ports to be plugged in that score block placement in different ways. The flipside variants on the backside reminded me of Antoine Bauza, who famously mentioned on my podcast that one of his publishers, Repos Productions, encourages this strongly – suggesting it’s otherwise a waste of the back of cardboard. I happen to agree; this feature allows for varied play via selection or random options. I can only assume Walker-Harding is cooking up additional ports for expected expansions of the game. Heck, we designed a couple on the spot last time we played.

The Final Word on Imhotep

Imhotep is a well-designed, interesting game that I’m glad is on our shelves. I do think gamers will enjoy it more if they play the B variants or some combination of A and B. Some longtime players may feel like they have enough gateway games but, like Hanging Gardens, Carcassonne, Kingdom Builder and even Schacht’s own Zooloretto, it fills a useful spot in a collection. Imhotep is also good enough to delight experienced gamers who enjoy a super-filler with a 90’s euro feel.

One thought on “Session Review: Imhotep from Phil Walker-Harding & KOSMOS”