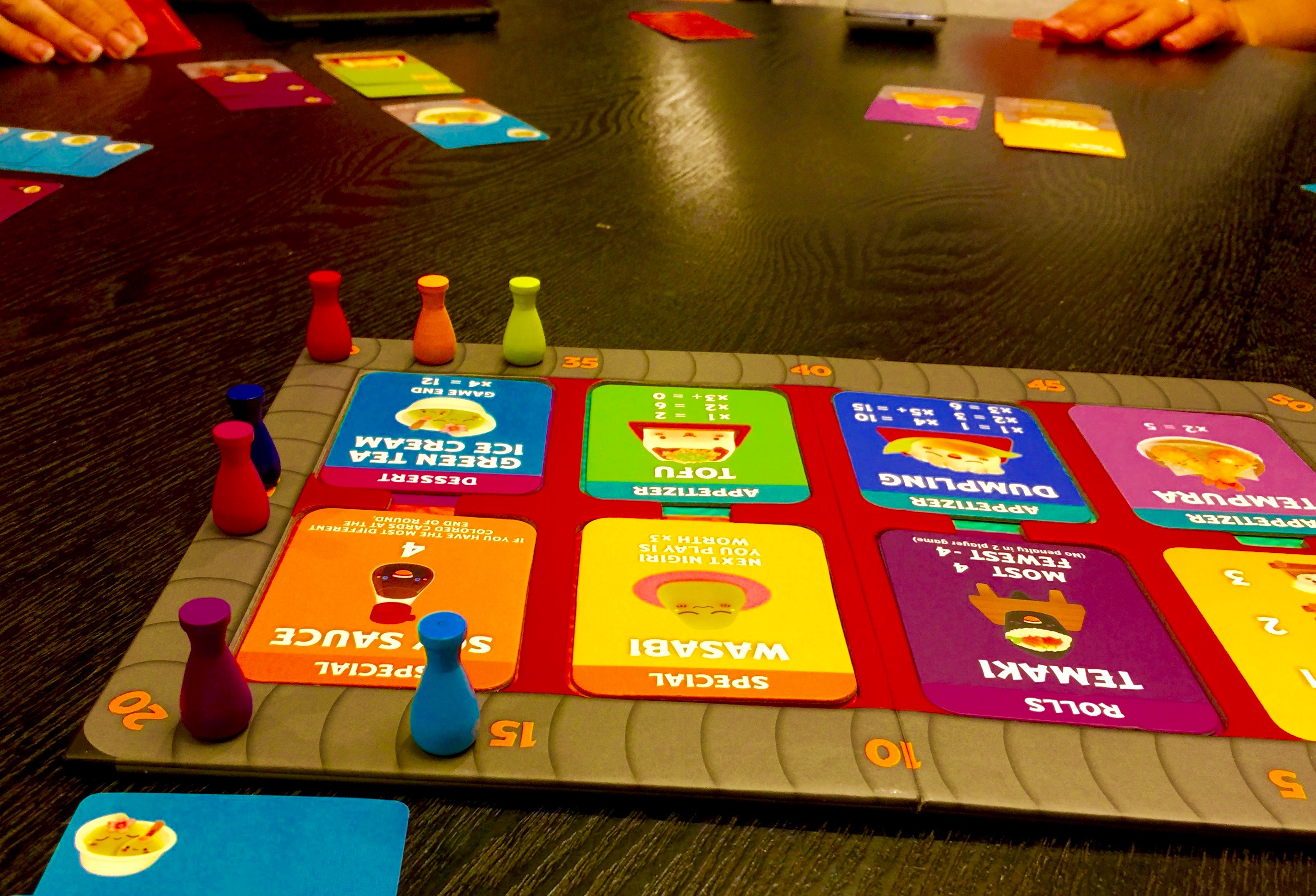 Don’t you hate it when a new edition of your favorite game comes out and the old one might as well go in the trash bin? Sushi Go Party will not do that to you. Fans will love the expanded version and they can easily recycle their previous copy by handing it to a friend as a great introduction to modern board games. That is, until the friend loves it so much that they upgrade to Sushi Go Party and pass the basic game on, too. The new version is that welcome and good.

If you don’t know the original Sushi Go, where have you been? This inexpensive crowd-pleaser has enjoyably light 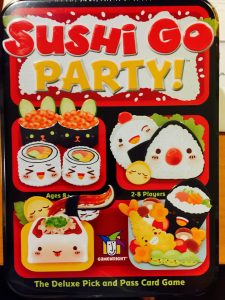 game play (plays in 20-30 minutes) and charming artwork sure to dazzle young and new-to-modern-game players. The game works incredibly well for that set, while serious gamers often like it as a filler.

Play is simple but interesting: players get a hand of cards, selecting and revealing one at a time, and then passing the hand to the left (a ‘pick and pass’ mechanism, as it is sometimes called). This is done until all cards are gone, which triggers scoring for the round. Points are awarded for sets that are collected and scored in unique ways for different cards (e.g., majority, multipliers, pairs, etc.) The game plays over three rounds, with building scores and a final bonus for dessert cards collected over the course of the game. The original game is enormous fun and so worth the cost of this small tin chock full of fun. But the new edition is even better.

Yes, it’s still Sushi Go but bringing the party means two key changes: more players and more variety. The new expanded version offers both in spades. Sushi Go Party plays up to eight – a very welcome feature – and combines the original game with the Dominion concept. Designer Phil Walker-Harding (whose SDJ-nominated Imhotep is all the rage right now) gives buyers of the big new tin a host of new cards in sets that you can mix and match for varied play.

In an inspired thematic choice, Walker-Harding has added ‘menus’ of card sets to play. Card types are now categorized as Rolls, Appetizers, Specials, and Desserts. Your custom bento box of card selection options (you can use a pre-made ones or build your own) are clearly shown with cardboard markers that sit in the center of the new score track. Hurray to that addition as well. No more score-keeping elsewhere on paper or scoring apps round to round.

Card and menu selections from each type can adjust the feel of the game for more interaction or to appeal to larger player counts. For example, there’s now a Spoon card that allows players to request a card from other player hands. There are also risky propositions with Eel and Tofu cards, which require players to have specific numbers of cards or earn a penalty. Additional desserts have been added and a distribution tweak that has more of these end-of-the-game cards rolling in each round makes these post-meal bonuses work better. 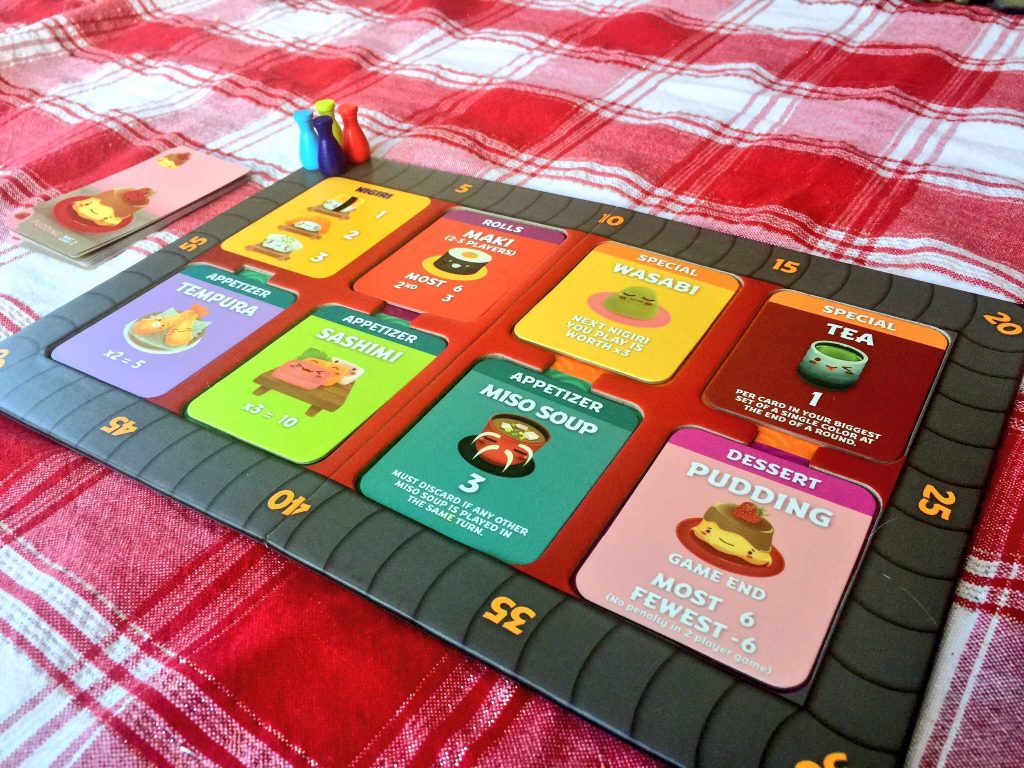 Like Sushi Go, Sushi Go Party plays quickly and it doesn’t take any longer to play with eight than it does with the original five player limit. In fact, the new edition even has improved rules to play the game well with only two players. My wife and I tried the new two-player version and it worked quite well. While it isn’t a game that I’d expect to transition so well (even the wondrous 7 Wonders is MUCH better as 7 Wonders: Duel than in in the two-player variant of the original), Walker-Harding has come up with a good way to handle things when you want Sushi For Two.

Sushi Go Party is an ideal upgrade to the original and an instant buy for fans of the game. Everyone who plays it with us says they want to buy it. The game is now on our must-include board game list for travel and big game parties. The US edition is out from Gamewright and you can see previews of many of the new cards on the designer’s Twitter feed.

New dessert in Sushi Go Party! – FRUIT
3 types that score like dumplings but -2 if you have 0. Get a piece of each! pic.twitter.com/i591N7Mkkt